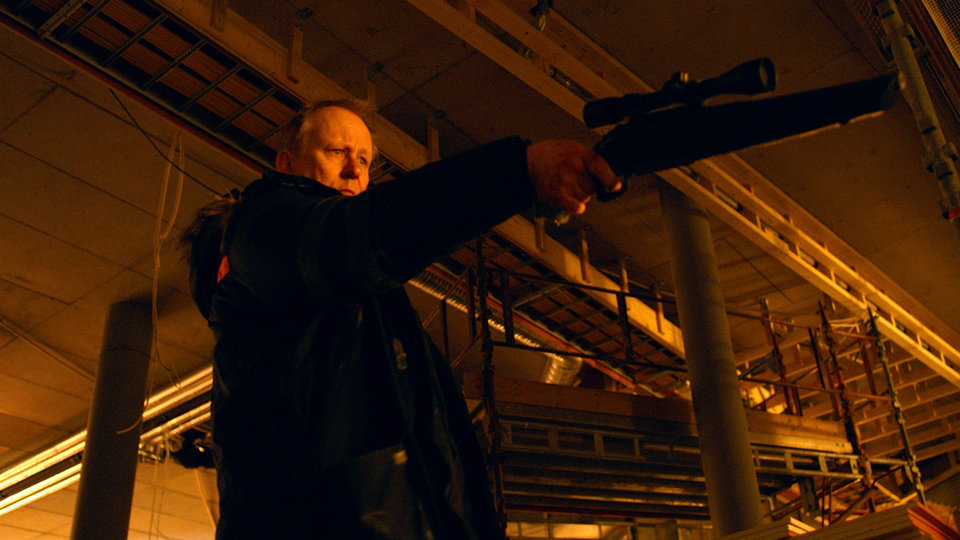 Nils has recently been awarded Citizen Of The Year due to his constant upkeep of the roads during the winter months in the mountains of Norway. When his son is murdered for something he didn’t do, Nils wants justice. But justice can only be sought by revenge. His actions begin a war between a vegan gangster and a Serbian mafia boss. Nils may be an ordinary citizen but he has beginners luck and a snow plough.

We have seen over the past few years that the new action heroes of film are the elder statesmen – Sly and his Expendables, Liam getting Taken and Bruce trying not to Die Hard. With this in mind it seems all the older actors are getting in on the action (pun intended) and the next to step up to the plate is Stellan Skarsgard.

Set amongst the mountains of Norway, In Order Of Disappearance has that bright white cinematography that pierces the screen. With minimal scenes taking place in the dark, we get to see as much action as is allowed as blood splatters on the white snow. The film also has the terrific idea of killing people with a snow plough – a new idea amongst these films that hasn’t really been done before, but works very well in the correct settings. There isn’t much else on offer really, but there doesn’t have to be as it’s more about how to use hatred to bump of those ear-marked for death. The storyline is pretty flat – revenge against gangsters/mobsters – and is only there to serve as the starting block. Expect nothing else to come from it and you won’t be disappointed.

Stellan, whilst looking like a beaten dog throughout most of the film, appears to be enjoying himself as he offs each gangster with ease and aplomb. He gets some cool lines to say as well. It’s clearly the type of role that he could just go a little nuts with and it works well for him. Villain-wise, the movie does suffer from lacklustre evil guys that hit nearly every cliché ever written. There is never any real sense of nastiness from them. So when they do pop off we didn’t feel like it was a huge issue.

In Order Of Disappearance manages to mix some Nordic Noir with plenty of Taken to drum up a film that is easy on the brain and a lot of fun thanks to Skarsgard’s no nonsense snow plough sense of justice.

In this article:In Order of Disappearance