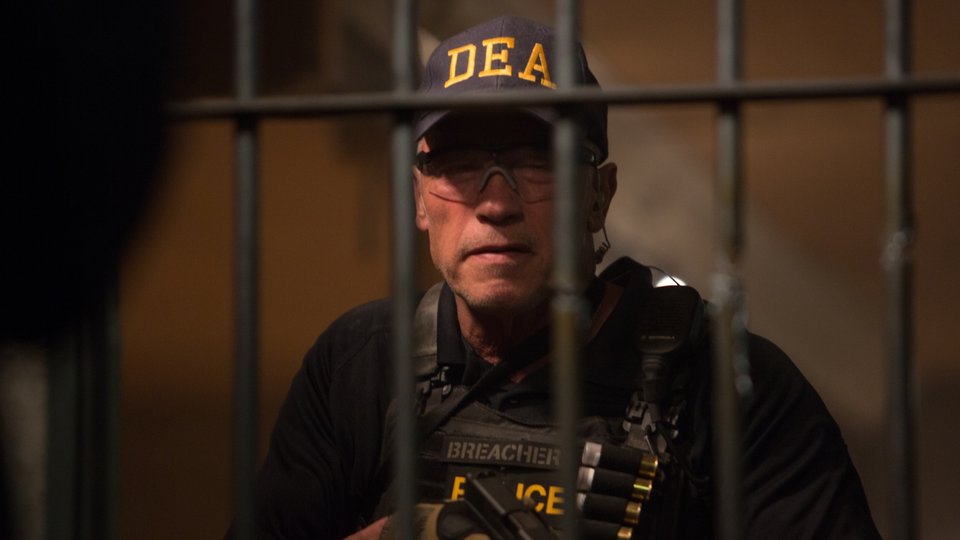 John ‘Breacher’ Wharton (Arnold Schwarzenegger – The Terminator) is the head of a DEA task force that handle front-line missions with brutal precision. When a drug-heist ends badly, his team are disbanded and put under investigation. But what soon unravels is a war on Breacher’s unit, with members being picked off one by one. Who is behind this and could there be a traitor within his unit?

Arnold Schwarzenegger returns to hard action in this curious crime-thriller. Writer/director David Ayer (a man with notable credits to his name including End of Watch, Training Day and The Fast and the Furious) somehow manages to crash the plane with a flaccid attempt full of awful characterisation, ridiculous circumstance and general nonsense.

Arnold Schwarzenegger is very good in the film and it’s a joy to see him tackle hard and fast action once again. He looks brilliant throughout and has plenty of set-pieces to run amok in. His trademark charisma and one-liner wit is still present and he handles some of the more dramatic moments very well. It’s just the script that sullies all of his good work. An unrecognisable Sam Worthington suffers a similar fate but he tries hard and hands in his personal best performance for a few years.

The supporting cast are a very mixed bag. Joe Manganiello and Max Martini make up the numbers to look muscular and mean whilst Mireille Enos does what she can with a truly awful character devoid of any redeeming factors. Once you set your stall out in this way, it makes any plot developments fall on deaf ears if the audience has no connection to you. And quite what made Terrence Howard, Olivia Williams, Sam Worthington and Lost duo Josh Holloway and Harold Perrineau sign up for this is beyond me. Williams in particular looks baffled and uncomfortable throughout, including an out-of-nowhere romantic story thread that clichés any hope of her character being believable.

Sabotage is a very disappointing affair that should have been an easy win. A story riddled with flaws, paper-thin characters and motivations which offer little justification makes very hard work of a good premise. It’s only redeeming factor – Arnie still looks bad-ass with a gun. Hopefully a return to more 18-rated action will be a more familiar fixture for Mr. Schwarzenegger in the future. For now, Sabotage is an effort best forgotten.