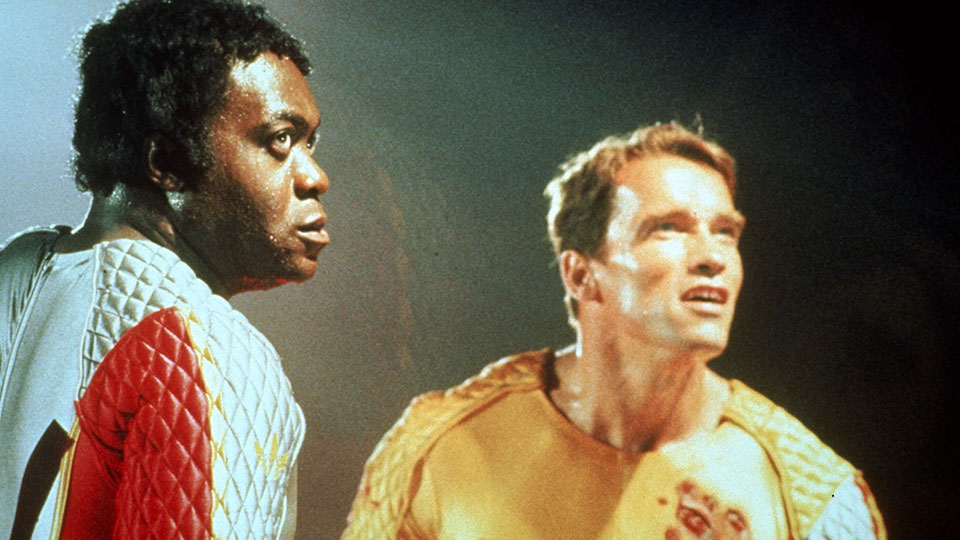 In 2019 police helicopter pilot Ben Richards (Arnold Schwarzenegger) is framed for a massacre during a food riot in California. After escaping from a labour camp, Ben tries to visit his brother who has disappeared and a woman called Amber (Maria Conchita Alonso) is now living in his apartment. As Ben tries to flee with Amber as a hostage, he’s arrested and the two are entered into a barbaric television show called The Running Man, where they have to battle for their lives.

It’s quite strange watching The Running Man in 2019, the year it was set. Oddly prescient in some aspects, the film’s setting is oddly eerie and one of the least surprising things about it is the TV show at the centre of everything. Given that reality TV now dominates with shows such as Big Brother and Love Island pulled in viewers, it really doesn’t feel like we’re too far from a show like The Running Man, which is a modern day take on the gladiatorial battles that used to provide entertainment centuries ago.

Based on a novel by Stephen King, who penned it under the pseudonym Richard Bachman, The Running Man is a sci-fi action-adventure that ranks high on Arnie’s list of best films. Never really much of an actor, he definitely looks the part and action is what he’s always done best, although he showed a talent for comedy later in his career. There’s no denying that the film looks very dated, in part a product of trying to envisage what 2019 would look like. There are elements though such as voice activated technology that predicted the future before it happened. That’s kind of spooky now!

The Running Man is the kind of film you need to go into with your brain turned off. While it will raise questions around what point entertainment becomes a twisted kind of voyeurism, the film mostly revels in its set pieces and action sequences. Arnie is perfectly fine as Ben, bringing his macho physique and unquestionable presence to the screen. Maria Conchita Alonso, as love interest Amber, is pretty terrible. Her acting, which is a generous compliment, consists of nothing more than reading lines from memory with little in the way of emotion or conviction.

The Blu-ray edition features two audio commentaries, a couple of featurettes and a trailer.

The Running Man is throwaway fun. I loved the film as a kid but I have to admit it’s not really stood the test of time. There was a bit of a thrill watching it all these years on and the Blu-ray transfer looks really nice. That having being said, it’s nothing more than an average action film and while there are some great touches, it’s not the masterpiece I thought it was when I was a kid.