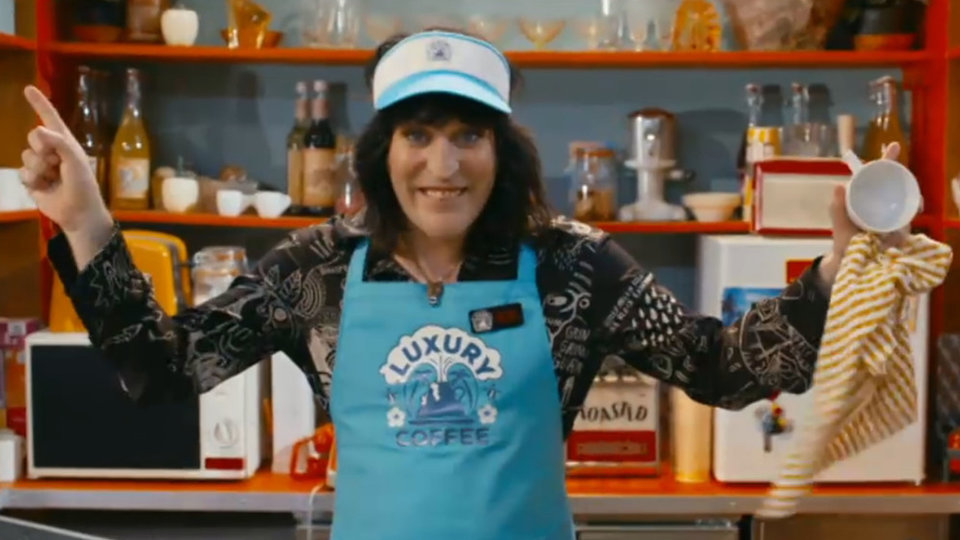 Noel Fielding – co-creator of the phenomenal cult franchise; The Mighty Boosh – brings his own psychedelic brand of comedy to DVD this summer.

Luxury Comedy is a 7-part comedy show quite unlike anything else on television; an original E4 series, this hilarious surreal treat is a fusion of live action and animation, with music by Kasabian’s Sergio Pizzorno. Both Noel Fielding’s Luxury Comedy and Luxury Comedy 2 – Tales from Painted Hawaii are out now on DVD.

Along with animator/director Nigel Coan (The Mighty Boosh, Bunny and the Bull), Fielding has created a joyful, charming explosion of a TV show that is in the tradition of comedy greats Spike Milligan and Kenny Everett.

Among other characters that feature throughout the series are: Tony Reason, a manta ray music producer who lives in a fish tank under the tree house; Roy Circles, a games teacher suffering from severe shell shock who’s also a chocolate finger; Sgt Raymond Boombox, a food loving New York Cop with a knife wound on his arm that talks to him and helps him solve his cases; and Fantasy Man, a kind of Don Quixote trapped inside an electronic opera.

Tales From Painted Hawaii is the second instalment from the Luxury Comedy team. Join Noel and the gang, Andy Warhol Dolly and Smooth (Michael Fielding) in a coffee shop on the edge of a volcano in Painted Hawaii, for five brand new magical adventures.

See them battle a monster called Fantasy Block in an attempt to save their only viewer Terry from being killed by an asteroid. Welcome back Fantasy Man, New York Cop and Joey Ramone, get naked and dance to new music from the “Loose Tapestries” (Sergio Pizzorno, Kasabian) and gasp at the comic styling of guest stars including Richard Ayoade (The IT Crowd), Steve Oram (Sightseers), Rich Fulcher (The Mighty Boosh), Simon Farnaby (Horrible Histories).

Luxury Comedy is heavily influenced by the worlds of art and music. It’s smart, ambitious, like Salvador Dali and Mick Jagger recreating The Jungle Book.

Warm and strange and packed with jokes, this comedy will change the way you feel about television and your own hands forever. Noel invites you into his weirdly wonderful world as you catch up with his outrageously funny Luxury Comedy and Luxury Comedy 2 – Tales from Painted Hawaii, which are yours to own on DVD now.

To be in with a chance of winning one of 5 bundles containing Noel Fielding’s Luxury Comedy 2: Tales from Painted Hawaii on DVD and a mug, just answer the question below.