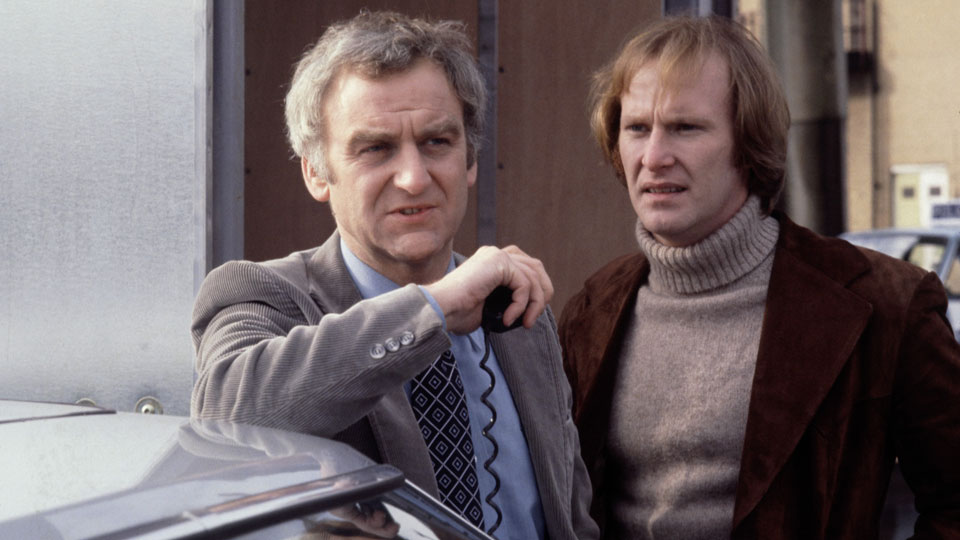 Our chums at Network recently sent us a list of their top ten British crime-fighting duos from the small screen to celebrate the imminent release of The Professionals on Blu-ray. We agreed with some of their list, but thought of our own additions.

So here, in no particular order, is our own top ten. See if you agree.

1. Regan and Carter (The Sweeney)

They’re The Sweeney, and they haven’t had any dinner. Now get your trousers on sunshine, you’re nicked. John Thaw and Dennis Waterman burst onto our screens in 1975 as Regan and Carter and completely redefined crime drama. The cosy depiction of the police built up in Dixon of Dock Green was gone forever. The antics of the Flying Squad live on in DVD and Blu-ray.

Yes, John Thaw again; but this time in a completely different guise as the snobbish, opera-loving police inspector who always turned green at the sight of a corpse. Teaming him up with Kevin Whately’s Sergeant Lewis, the affable everyman from Up North, proved a masterstroke as viewers couldn’t get enough of them. Top theme tune, and beautifully written scripts. But who knew the murder rate in Oxford was so high?

We can’t be bothered with remakes where Holmes is a womanising emo-boy who can’t get off his mobile phone. For the definitive characterisation of Arthur Conan Doyle’s private detective, look no further than Jeremy Brett’s career-defining portrayal in the Granada series of  the 80s and 90s. It’s tough to decide who the better Watson was out of David Burke and Edward Hardwicke: but we prefer the mild-mannered Hardwicke. There’s only one Sherlock Holmes: Jeremy Brett.

Immediately before he became the longest-running James Bond (and one of the best, in our view), Roger Moore teamed up with Tony Curtis to solve crimes in a glitzy TV production for Lew Grade that broke previous budget records. The stories were daft, but viewers tuned in for the camaraderie between refined aristocrat Moore and self-made American millionaire Curtis. Oh, and Moore designed his own costumes, and Curtis always wore leather gloves. Enormous fun.

5. Bodie and Doyle (The Professionals)

Taking on the baton from Regan and Carter were the shenanigans of Bodie and Doyle of CI5. The series starred Martin Shaw and the late Lewis Collins (who was deemed too thuggish for Bond). Despite the alleged off-screen animosity, the Bodie and Doyle capers are still great fun to watch.

Probably the best-remembered line-up of the long-running series, in which Patrick Macnee was paired up with Diana Rigg (who took over from Honor Blackman during the black and white era). Brian Clemens (responsible for so much great British telly in the 60s and 70s, including the above-mentioned The Professionals), created the wonderfully surreal and camp show, and wrote many of its best episodes. Distinctively British.

A crime-fighting duo with a difference: one of them is dead. Jeff Randall (Mike Pratt) is haunted by his former fellow sleuth Marty Hopkirk (Kenneth Cope). Thankfully, only Jeff can see Marty, though Marty’s lack of corporeality proves a distinct drawback. The series was later remade with limited success with Vic Reeves and Bob Mortimer in the title roles. Great theme by Edwin Astley (the original).

The part that made Edward Woodward’s name, David Callan was one of the original TV anti-heroes. The manner in which he exploited petty criminal Lonely (Russell Hunter) to work for him was always amoral at best: yet the dim-witted Lonely considered ‘Mister Callan’ his only friend. Touching; and landmark television.

Much-loved 1980s series in which a Brit (Glynis Barber) and an American (Michael Brandon) were teamed up so that sparks would fly. The sizzling on-screen chemistry carried over into real life: Barber and Brandon have been married in real life ever since!