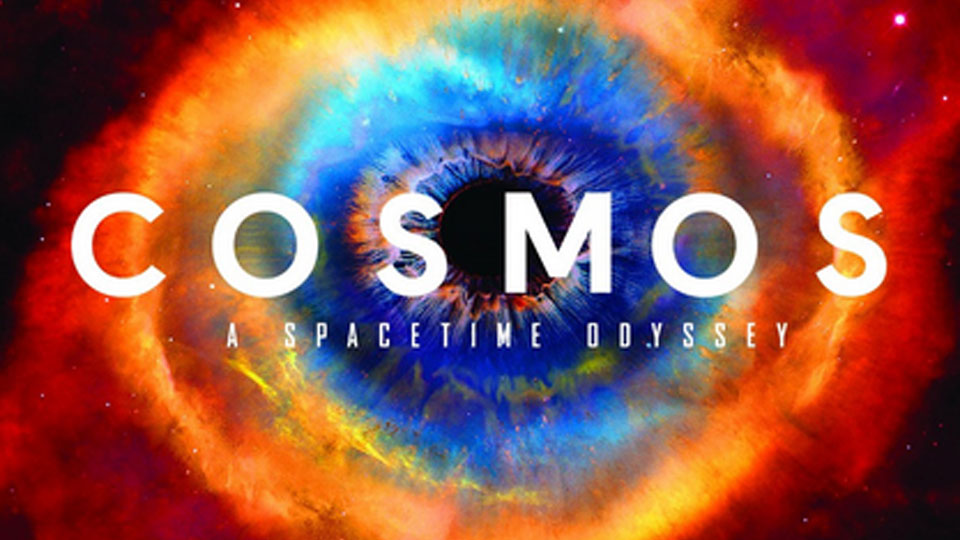 Carl Sagan, one of the Twentieth Century’s great popularisers of science, wowed audiences in 1980 with his series Cosmos, which sought to bring science and its human stories to as wide an audience as possible. It’s now regarded as landmark television. A generation on, one of Sagan’s former students, Neil deGrasse Tyson, takes the baton and brings the same epic journey of scientific discovery to a new generation.

Fans of the original series will not be disappointed, and there are plenty of links to its previous incarnation. Cosmos: A Spacetime Odyssey is co-written by original series contributor (and Carl Sagan’s widow) Ann Druyan. It is infused with the heart and soul of Sagan, retaining the same accessibility, solid science and spirit of adventure. The central premise, using a ‘Ship of the Imagination’ as a vehicle that can transport the host anywhere in space and time, remains the same; as does the pleasing mixture between the not-always-happy stories of human scientific discovery throughout history, to grand concepts at the frontiers of our current knowledge. The scope is enormous. Cosmos covers everything from the very large (planets, stars, galaxies) to the subatomic; often focussing on physics but exploring the biological sciences (dog lovers will adore a section on the domestication of the wolf) and chemistry too. For an enquiring mind, Cosmos is non-stop wonderment.

The comparisons between the original and new series ultimately don’t matter, because Cosmos:  A Spacetime Odyssey is a magnificent, classy, clever and confident series in its own right. Neil deGrasse Tyson is the perfect choice to host: any time in his company is well-spent, and his easy charm is the ideal medium for putting across scientific ideas.

Using the latest computer graphics, and merging them with extensive location filming all over the planet, and even beyond; Cosmos is a feast for all the senses as well as for the mind. Whilst the visuals are spectacular, they are matched by beautiful animation that bridges the gap to the past. In the first episode, we’re told the story of the Sixteenth Century monk Giordano Bruno, who was persecuted by the Catholic Church for challenging their orthodoxy, by claiming that the universe held an infinite number of stars. Bruno as dreamer soars from his prison cell into space, but in captivity his eyes become haunted. Another memorable episode animates the bitter feud between Isaac Newton and Robert Hooke, with the latter’s face never fully revealed, owing to the absence of any contemporary portrait. Commendably, Cosmos brings to the public consciousness the many forgotten or overlooked tales of the achievements, insights and considerable contributions to human knowledge made by female scientists.

One of the later episodes is given over to climate change and man-made global warming, an issue that was close to Sagan’s heart and explored in the original series before such green issues pressed on the public consciousness. The series doesn’t perhaps go far enough: over-population being one of the key factors in the rapid consumption of natural resources and deforestation; but it faces up to its responsibility to present the most urgent survival issues besetting humans today. Cosmos takes its remit to educate seriously, and there are forceful and thorough rebuttals to the increasingly-heard religious objections to evolution, the age of the universe and climate change; and as such, Cosmos is a soothing tonic of rationalism, sumptuously packaged, with enough nutrients to feed any hungry mind.

All aspects of the production come together perfectly, making Cosmos entirely compulsive, addictive viewing. It’s also full of warm, touching moments, such as Tyson recalling Sagan’s generosity towards him, as the torch of the scientific method was passed on. Let’s hope it inspires another generation as much as the leading scientists of today who first felt the allure of science through the 1980 original. We can’t recommend Cosmos highly enough as exciting, inventive and thoroughly entertaining documentary television. Cosmos raises the bar for science programming, and stands as a joyous celebration of the human species’ greatest achievement: science.