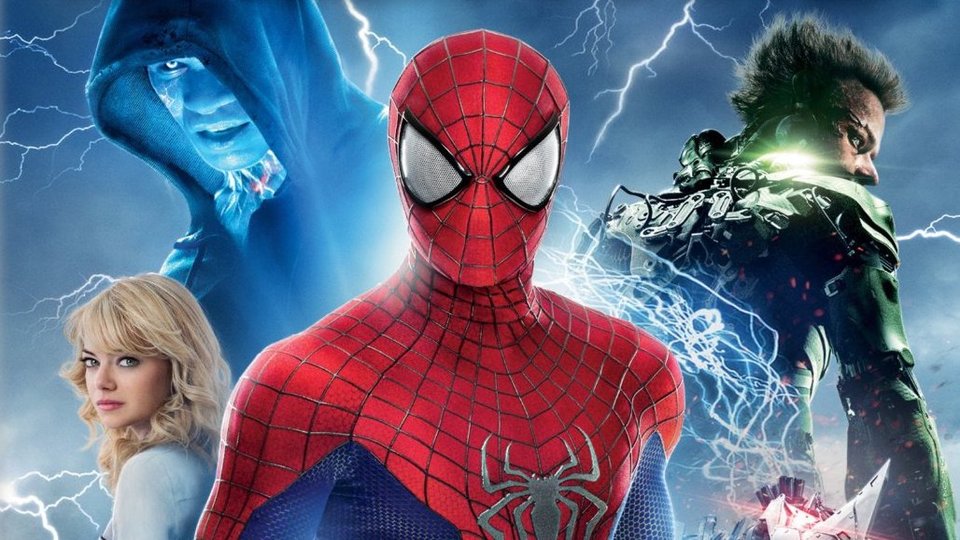 Spider-Man (Andrew Garfield – The Social Network) is now a familiar sight across New York. Peter Parker is graduating high-school along with his girlfriend Gwen Stacy (Emma Stone – Crazy Stupid Love) and the future is looking bright. But the disappearance of his parents still haunts Peter, along with the constant fear that he is putting Gwen in danger by being Spider-Man. He also has to contend with a new threat to the city, when a former Oscorp employee has a terrible accident and transforms into Electro – a villain made of pure electricity who wants the world to notice him.

The Amazing Spider-Man reboot swung into theatres a mere 5 years after Spider-Man 3 underwhelmed audiences and left a bitter after-taste. While the franchise certainly needed a ‘pick me up’, a full-on reboot felt very rushed and a bit pointless given the established chemistry Tobey Maguire and Kirsten Dunst shared so effectively together. The Amazing Spider-Man turned out to be an OK effort… not one of Marvel’s finest by any means, but a solid and enjoyable summer blockbuster. The Amazing Spider-Man 2 therefore comes with a heavy weight of expectation. Thankfully it’s a much better movie that’s more focused and relevant than its predecessor by delivering fun, excitement and grandeur on a big scale.

The casting is the films high point with a perfect balance of established names all handing in great performances. Andrew Garfield steps up and does very well as Peter Parker at the second time of asking. Perhaps a bit too hip for those of us used to seeing Peter Parker as a real dork, Garfield still hands the film a fresh and unique take on our hero and is always fun to watch. He also nails Spider-Man’s quick sense of humour – more so this time around with his Spider-Man being a very true interpretation of the quick-witted and wise-cracking webhead we all loved from the comics. Garfield is more comfortable in his Spider-suit now, which gives him the opportunity to really go for it and he does a great job here.

Emma Stone is near-on the perfect female lead. The super-talented young actress does exceptionally well as Peter’s first love (long before Mary Jane comes along) and gives the film a real sense of purpose and a central relationship that you can believe in. If there’s one thing director Marc Webb knows how to do, its conveying relationships on-screen with a strong emotional core. Garfield and Stone are the films brightest sparks – they ooze chemistry at every opportunity and make the Peter/Gwen relationship pivotal on so many counts. A scene which reconnects Gwen and Peter after a few months apart is just magic to watch, with ‘Song for Zula’ by Phosphorescent perfectly sound-tracking the essence of their relationship. Stone and Garfield bounce off one another to create one of the most loved dynamics in superhero movie history.

As for the supporting cast, Sally Field continues to impress when needed as Aunt May. Jamie Foxx does very well with Electro, but his alter-ego before the transformation (Max Dillion) feels a bit too simplistic. This isn’t a reflection on Foxx’s portrayal, more on the writing which doesn’t use the opportunity to really make Max a well-rounded individual. His motivation for going after Spider-Man is too convenient and makes little sense in the grand scheme of things. At times he borders on Jim Carrey’s portrayal of Edward Nygma from Batman Forever. But some of the exchanges between Foxx and Garfield (especially during the Times Square sequence) are very good.

Dane DeHann does an exceptional job with Harry Osborn. He makes his friendship with Peter both convincing and integral to the bigger picture. DeHaan also shares a great sequence with his on-screen father Chris Cooper (as Norman Osborn). The references to the Green Goblin are well realised here and tease to a much bigger threat on the horizon. Dennis Leary lends the film a nice cameo touch as Gwen’s deceased father who haunts Spider-Man whenever he wants to get close to his daughter. Speaking of cameos, Stan Lee’s one is very funny too and will get fanboys cheering.

The effects are a huge improvement on the first film. The CGI is heavy but it works for spectacle. The Amazing Spider-Man 2 does a great job delivering a blockbuster that pretty much everyone will like. It goes big when it needs to and makes sure there are always sequences that excite its audience. At times the effects do look like a Playstation game cut-scene but there are other sequences that really convey everything a Spider-Man film should. The opening scene has Spider-Man swinging through New York and it’s fully immersive. You genuinely feel like you are swinging along like Spidey with camera angles and tricks that place the viewer firmly in the boots of our hero. The sound and visuals of Electro destroying Times Square is excellent and the films opening plane scene featuring a flashback to Peter’s parents is very exciting.

There are no lulls here and that’s mainly down to The Amazing Spider-Man 2 being a big establishing ground for Sony’s intentions with the franchise. With a Sinister Six and Venom movie already confirmed along with Spider-Man 3 and 4, we know that there are a lot more story-threads that this franchise are going to tackle. By using Marvel’s template, Sony are setting up everything with nods to villains like The Vulture, Doctor Octopus, Venom, Kraven the Hunter and even Carnage scattered around this film. Throw in Felicity Jones as Felicia Hardy aka Black Cat and you have Spider-Man’s universe taking shape. It remains to be seen just how this will all come together though (the Rhino for instance is a terrible addition to The Amazing Spider-Man 2 with Paul Giamatti hamming it up to disappointing levels).

Jason Palmerhttp://www.entertainment-focus.com
Jason is a film contributor for Entertainment Focus (EF) bringing you the latest news and reviews from the movie world.
Previous article
A Perfect Plan DVD review
Next article
Denis O’Hare, James Buckley in The Pyramid trailer