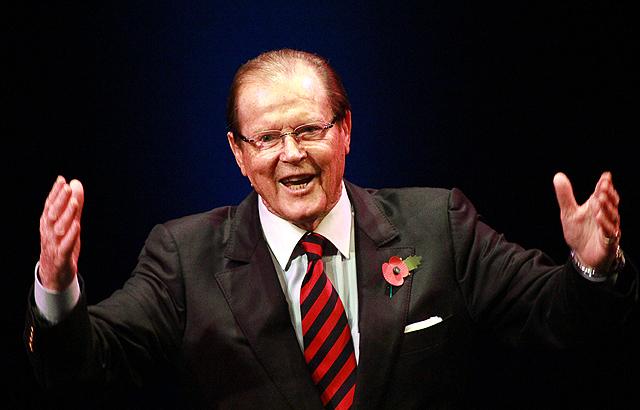 Sir Roger Moore, the legendary film actor and humanitarian, is to play a series of exclusive dates at theatres around the UK. Following the huge success of his 2012 and 2013 tours, Sir Roger will return with eleven new dates this autumn, opening at Canterbury’s Marlowe Theatre on Sunday 14 September. Roger will be discussing his astonishing life and career, with inside stories and exclusive anecdotes ranging from his internationally-renowned TV series The Saint and The Persuaders, through to Hollywood blockbusters and, of course, the 007 films, in which he starred as James Bond between 1973 and 1985.

Gareth Owen – who has interviewed Roger previously at the BFI Southbank, the Barbican Centre and at various UNICEF fundraisers throughout Europe – will host the ‘Evening With’ talks with Roger. He is an author of eleven books and has worked with Roger Moore on his autobiography My Word Is My Bond, Bond On Bond and Roger’s latest book: Last Man Standing: Tales from Tinseltown – due for release this September.

In his latest collection of true stories from his stellar career, Roger lifts the lid on the movie business, from Hollywood to Pinewood. Wonderfully entertaining and laugh-out-loud funny, this selection of tales from the world of the movies is vintage Moore at his very best. The show includes an audience Q&A where attendees have the opportunity to put their own question to the Hollywood legend and get the inside track from Roger himself on a career that took him from his beginnings in South London as the son of a local policeman to 007, via the golden age of Hollywood.  The tour is presented by Suzanna Rosenthal & Jeremy Meadow.

The tour opens on Sunday 14th September at the Marlowe Theatre, Canterbury, at 5:00pm. To book tickets visit www.marlowetheatre.com. For more details and a full list of engaged houses, visit Meadow & Rosenthal.