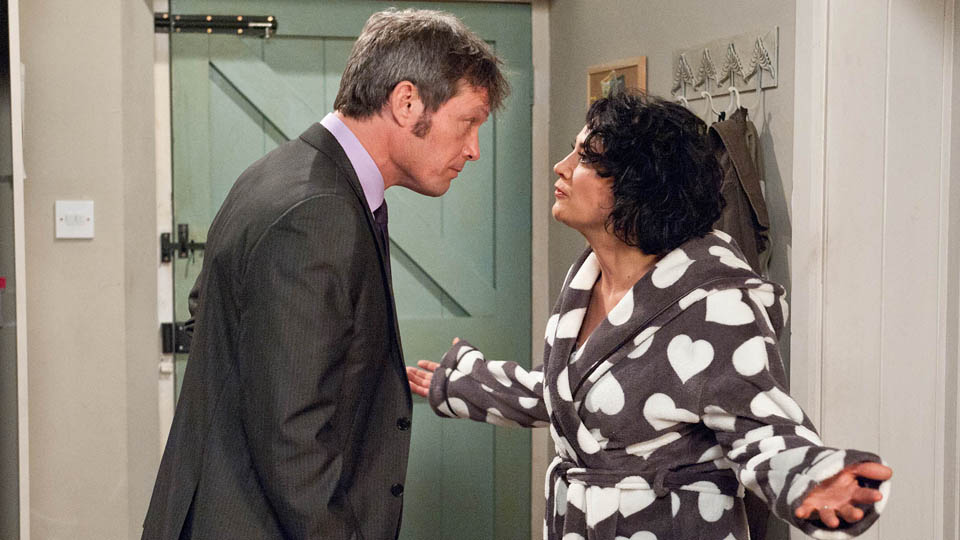 The Weekly Recap
Who’s the Daddy?  James it seems
James curiosity about whether Adam is his kid turns to action this week when he finds the stolen £10,000 in Moira’s cupboard and realises that she has set him up.  He decides to steal something himself: Adam’s sock.  He sends it off for a DNA test and when he finds out he is the daddy he decides to share the news with Moira, on her wedding day!  Moira begs him not to ruin her special day and James leaves telling her that she needs to come clean to all involved.  But so far she’s avoided it and made up a lie about the police finding the money.  How long will James let her get away with it?

Chas discovers Charity is planning to have an abortion just days after her wedding to Declan and can tell that she’s making a big mistake marrying him.  She tries to persuade her not to go through with it and also enlists Cain to see if he can make her see sense.  The pair have had quite the history and it seems that underneath it all he still cares for her enough to bluff her into thinking that he’ll call off his wedding to Moira.  Charity is fished in completely and admits that she doesn’t want to marry Declan and would happily run away with Cain if he asked but when the penny drops she makes out she was bluffing herself.  The two weddings both go ahead….eventually.

After James delivers the blow to Moira that he is Adam’s father, she keeps the guests waiting by getting locked in her bedroom when the door wedges shut.  It’s left to hubby to be, Cain, to gallantly break down the door and make sure that she marries him.  The day is a big success although James worries Moira all day by getting extremely drunk and threatening to blab.

Charity is having a very small intimate wedding with just Declan, Megan, Robbie and Noah but if Cain and Chas attempting to make her call it off wasn’t bad enough, an asbestos problem means a last minute change of venue, the registrar almost doesn’t make it and Megan tries to scupper things too.  First she seizes the opportunity to steal the rings and then she sets the fire alarm off during the ceremony, but Charity soldiers on and becomes Mrs Macey.

Declan surprises her with a month long honeymoon in the tropical sunshine but is unaware that she is planning an abortion.  Will she manage to get rid of the baby and pass it off as a miscarriage?

Priya is back for a visit from her eating disorder rehab and she seems very keen on seeing David much to Jai and Alicia’s concern.  It’s the latter that’s left to come to her aid though when her waters unexpectedly break and the pair plus Leyla make a dash for the hospital in Alicia’s new car.  Unfortunately Leyla borrowed it earlier that day and filled it up with petrol as promised only problem being it’s a diesel car.  It breaks down leaving Alicia to deliver the baby in the backseat.

Little baby Amba is born and has a healthy cry on her at first but then as the ambulance finally arrives she stops breathing and is rushed to hospital.

Elsewhere…
Kerry is still pursuing her wedding dreams and in the reverse of most brides has bought a dress on Ebay she can grow into!  Dan walks in to find her sat in her oversized dress eating an éclair with Ameila who reveals Kerry has entered a ‘Win A Wedding’ competition.

It takes Pete making a pass at Vanessa for Debbie to realise she’s not giving him a fair chance over his previous assault misdemeanour and manages to reconcile with him and get their relationship back on track.

Belle realises that she can’t go through with sleeping with Sean to get pregnant as he confesses he loves her.

The Week Ahead
Charity goes to great lengths to avoid Declan’s plans and Megan is on her case.

Jai is more and more concerned over David’s influence on Priya as baby Amba fights for her life.

Ross has caught Donna’s eye but it might not be for the reason we think as she sets out to reel him in this week.