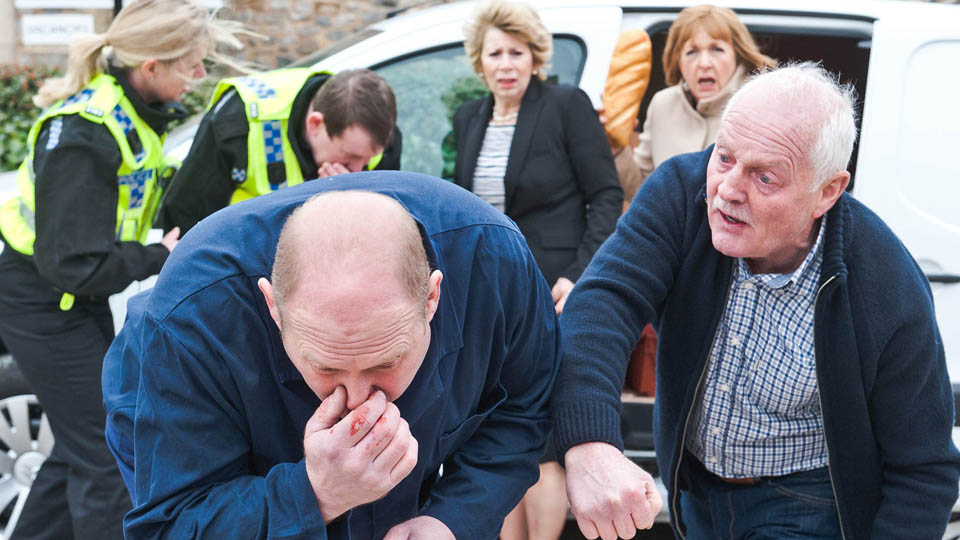 Welcome to our weekly look at what’s going on in the Dales.  Find out what you’ve missed last week and what’s coming up in the next couple of weeks.

Eric defends Val’s honour
Val thought she’d hit gold with breadman Tiny but doing the dirty he found out that Val has HIV and goes on the warpath telling the whole village what a diseased devious cow she is.

Eric isn’t happy about Tiny’s words and actions and challenges him to a very mismatched fight outside the café.  The whole village turn out to see what the kerfuffle is all about , as it ends with the police hauling  Val, Eric and Diane to spend the night in the nick.

Val isn’t happy and can’t see that Eric was defending her honour and is clearly still in love with her.  Ironically it’s only Val that gets charged with the other two getting off with a warning.

Alicia and Leyla  go to war over a surprise inheritance

A surprise visit from a solicitor sent Alicia into a panic but she needn’t have worried when it turns out a mystery man has left her £70,000 in his will.  Alicia and David are ecstatic at the windfall and start to talk about a holiday and a new car.

But the surprises don’t stop there as Alicia gets several drinks from a stranger in The Woolpack, all over her head!  Turns out she’s the wife of the man who left her the money.  Sister Leyla catches the whole episode and realises that the money should’ve been left to her as it was a man she’d had a fling with when she was pole-dancing and calling herself Alicia.

Layla goes on the rampage to get the money back, trashing Alicia’s front room and throwing vases, but Alicia and David aren’t budging.  Jacob is sick of the fighting so takes matters into his own hands stealing the money from the safe and throwing it in the river, leaving Leyla and David to jump in and recover as much as possible.  Seeing her son so distraught Alicia concedes that Leyla can have the money much to her delight but she does at least give some back to Alicia and David.

Donna turns to the other side of the law

Things really aren’t going well for Donna, after being told that she’s only got 6 months left to live, this week she’s hit with news that an investment she made of £60,000 to leave a nest egg for daughter April, has gone belly up.

Panicking about money she seizes an opportunity to pocket some stolen jewellery that she’s cataloguing at the police station.  She then gets in touch with a dodgy geezer that used to snitch for her to see if he can sell on the dodgy gear.

Debbie makes a pass at Ross

Worried about picking another mass murderer, Debbie digs deeper into Pete’s past and is upset to discover a misdemeanour.  She pushes him away and tells him he’s smothering her.  She consoles herself with one too many drinks and invites Pete’s brother Ross back to her place where they kiss and Debbie takes off her dress hoping for more but Pete has been toying with her and walks out.

Elsewhere…
The Woolpack gets a hen party makeover with Cain letting Moira in on their secret wedding next week.

Edna isn’t happy when she secretly donates money to Ruby and Ali for their broken car but overhears Ruby saying that she was going to use it for IVF.  Luckily Ruby and Ali seem to change their mind and stick with the kids they have got.

Kerry makes a video claiming to be dying to enter a competition to win her perfect wedding.  Hmm wonder if she’ll win and have to keep up the pretense?

The Week Ahead
Pete is thrown when he realises that Debbie knows about his past.

James confronts Moira about the DNA results he’s had done on Adam and demands she tell him the truth as she begs him not to ruin her big day.

Priya’s waters break and it’s Alicia and Leyla who have to rush her to the hospital.

And Beyond..
David and Priya’s bond grows as their new born daughter Amba fights for her life leaving Alicia out in the cold.

Charity still plans to have an abortion unbeknownst to Declan.