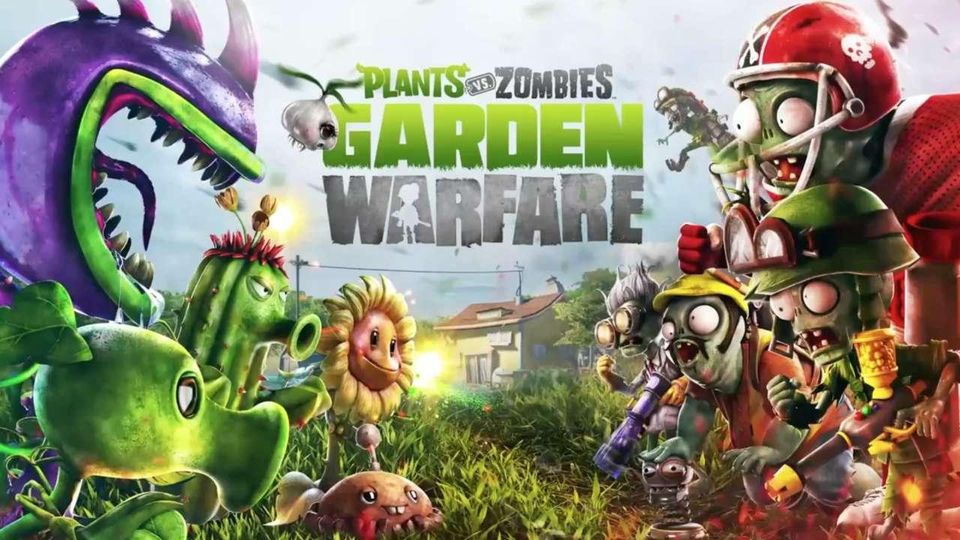 Plants vs. Zombies first appeared on Windows and OS X back in 2009. Developed by PopCap Games it was a tower defense game where you had to use a variety of crazy plants to prevent waves of zombies crossing your lawn and invading your house. The game was incredibly popular and eventually made its way onto consoles, handhelds and mobile devices. The game also spawned a spin-off on Facebook called Plants vs. Zombies Adventures and last year a true sequel was released by new owners Electronic Arts (EA) – Plants vs. Zombies 2: It’s About Time.

Plants vs. Zombies: Garden Warfare is a new take on the game. It moves away from tower defense in favour of a focus on multiplayer third-person shooting. It’s actually more like a Plants vs. Zombies take on Battlefield 4 and coincidentally it also uses the same game engine – Frostbite 3. We’ve been testing the Xbox 360 version but the game is also available on Xbox One and PC.

The first main mode is called Garden Ops and at the start of the session Crazy Dave nips off in his flying camper van. While he’s gone you play on a team of four plants who must build a garden and then defend it against ten waves of attacking zombies. Two of the rounds are boss fight rounds and after completing the last Crazy Dave comes back to extract your team in a Titanfall-style escape.

It plays a lot like Gears of War’s Horde mode and it is heaps of fun. The different class types are what really steal the show and all your favourites from the previous tower defense games are here. The plants on offer are a peashooter, chomper, sunflower and cactus. Each fills a different role such as assault, defense and medic.

Classes initially each have three abilities to unlock but it doesn’t take long. They are then mapped to the Y and shoulder buttons. Our favourite class of all is the sunflower which can shoot enemies, heal team mates, drop healing flowers and call on sunlight for extra damage. It’s an essential part of the team capable of looking after itself, damaging the enemy and taking care of teammates.

The other main mode is simply called multiplayer and features modes for up to 12v12. Here you’ll play on a team of plants or a team of zombies on a variety of different modes. The modes on offer are Welcome Mat, Team Vanquish and Gardens & Graveyards as well as Classic versions of each mode.

Team Vanquish is a take on team deathmatch with the first team to 50 kills declared the winner. Gardens and Graveyards is a bit like Garden Ops where each team has to fight through their opponents defences. The zombie team has equivalent classes to the plants such as Foot Soldiers, Engineers, Scientists and All-Stars. They all have their own 3 unique abilities and each is a lot of fun to play.

In addition to the main modes the game features a character hub where you can view the different characters as well as their abilities, appearances and gestures. There’s a sticker shop where you can trade your coins for new sticker packs and a sticker book where you can see which stickers you have collected.

Your performance in the game rewards you with coins and the better you do the fast you will earn them. Sticker packs cost between 1,000 and 40,000 coins to purchase and offer a variety of in-game items and stickers to unlock new things. You can also buy PvZ Coins with real money starting at 13,500 coins for £0.79 up to £7.89 for 200,000 coins.

Graphically the game looks lovely. It’s clear an awful lot of effort was put into turning the 2D graphics of the original game into 3D. The different character models are all very detailed and well animated. The 10 included maps are also nicely done with multiple paths through them. Something we really loved are the hilarious animated shorts that are shown when you unlock something new. Here you see the plants and zombies demonstrate how to use the ability you have just unlocked.

If you opt for the Xbox One version of the game you’ll be treated to some graphical improvements. The Xbox One edition also comes with a split-screen version of Garden Ops and a Battlefield-style commander mode playable via SmartGlass.

We were worried that Plants vs. Zombies: Garden Warfare might be a quick cash-in or a complete disaster. However we are pleased to say that we have been pleasantly surprised by the game. It’s a competent multiplayer shooter with well-balanced classes and enough depth and fun to keep you coming back for more. Also with regular free DLC updates promised the game should keep improving.