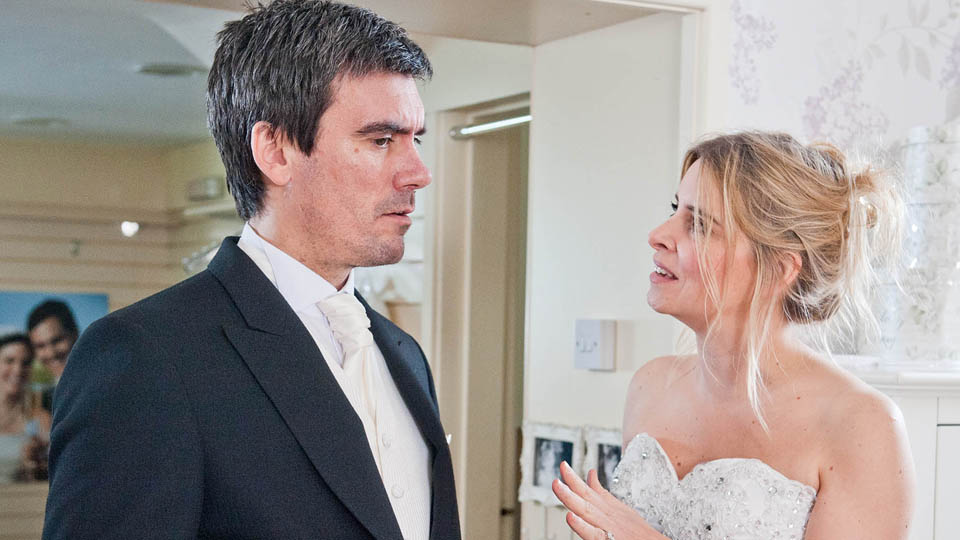 Welcome to our weekly look at what’s going on in the Dales.  Find out what you’ve missed last week and what’s coming up in the next couple of weeks.

It’s wedding season but two people who nearly got hitched together years back are now both getting married to their new partners on the same day – as they find out this week. First though it’s Megan who is throwing a spanner in the works for Charity and Declan’s wedding as she refuses to come unless she can bring boyfriend (and the bride’s ex-husband) Jai.  Declan is fuming but in a rare moment of sensitivity, Charity talks Megan round to agree to come on her own if needs be. Meanwhile Cain and Chas are planning a surprise wedding for him and Moira but it’s him that gets a surprise when he goes for a suit fitting.  Of all the bridal shops in all the world… in walks Charity, who thinks it’s funny to pretend that she’s his bride to be.  It’s only when they look at the shop diary that the pair realise they have both booked 15th May for their wedding day.  Neither are willing to budge, leaving Charity to accept that she’s probably going to be the only Dingle at her wedding.

Donna tries to tell Marlon about her illness but ends up bottling it when Laurel arrives home, leading Laurel to think that something is going on between her and Marlon.  Rhona has already stoked that fire but as the week goes on she uncovers the real truth this week. Whilst taking Leo to the hospital, Rhona spies Donna and sneakily follows her to the Oncology Department.  Seeing her distressed, Rhona approaches Donna to ask what’s wrong and she confesses that she’s got terminal cancer and only has six months to a year left to live. Rhona is stunned, but realises that Donna hasn’t come back for Marlon after all and in fact just wants daughter April to be looked after by her Dad when she’s gone.  Initially she gives Donna an ultimatum that she must tell Marlon or she will, but then realises it’s not her decision to make and becomes a sympathetic ear for her.

Bernice’s new beauty salon is still homeless but she’s gone ahead and ordered in all the equipment she’ll need and ropes in Andy to help shift it into Nicola and Jimmy’s place for now.  As a reward she offers to give Andy a free massage and the sexual tension is off the chart.  If Kerry hadn’t walked in we don’t know where it would have ended. Next time the pair meet though there’s no one else around and after Andy offers Bernice words of support on her new business venture she lunges in for a kiss and one thing leads to another. Later in the week they try to tell each other it was a one-off mistake but end up talking dirty only to be interrupted by Nicola and Jimmy turning up.  We’ll have to wait and see if this relationship has a happy ending!

Val hooks up with the bread delivery man Tiny, but she hasn’t told him her secret yet – how will he react when he finds out after the last guy ran a mile. Kerry drops very unsubtle hints to Dan that she wants to get married. Edna lines up her next charitable cause when she overhears Ruby’s cashflow issues.

Alicia inherits £70k from someone she’s never met….let’s just remember that Leyla’s dancing girl name was Alicia. Donna is in need of money and starts to consider selling stolen jewellery from work. Debbie’s research into Pete’s background appears to confirm her fears and in a moment of drunkenness she invites Ross back to her place.

James receives DNA test results and finds out if Adam is his son. Weddings a-go-go as both Cain and Charity look to tie the knot with Moira and Declan respectively but do these things ever go to plan? Priya’s waters break and Alicia and Leyla rush her to hospital.