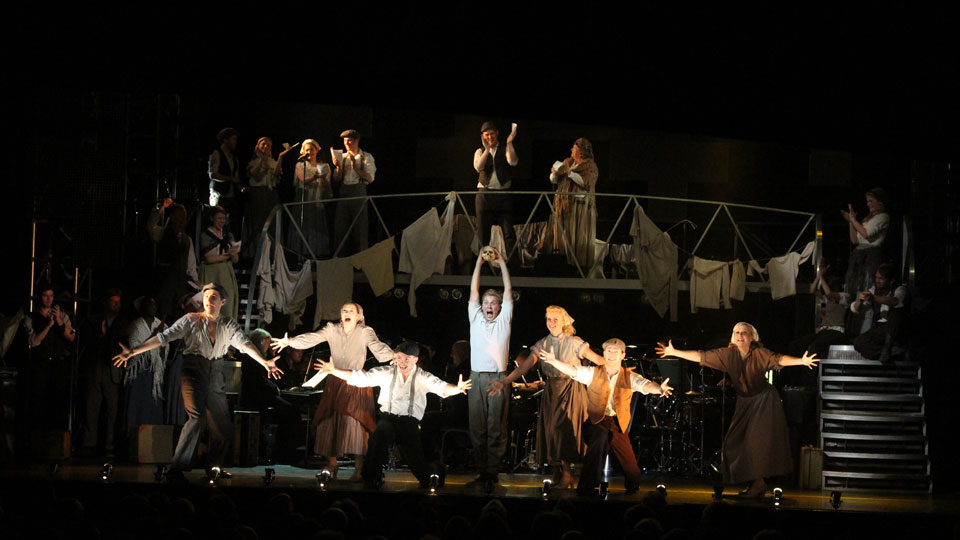 For one night only the West End home of Thriller was given over to a rare showing of Rags The Musical. We were delighted to head down to the Lyric Theatre to check out the one-off performance. Rags, a show about the struggles of Jewish immigrants escaping persecution and starting new lives in America at the turn of the Twentieth Century, was laudably staged in aid of Centrepoint, a charity dedicated to helping young homeless people in the UK.

This wasn’t a full airing of Rags, but a stripped-down rendition that nevertheless offered a theatrical punch. The Thriller set was adapted, and the actors were in full costume. An orchestra of eleven, sitting centre stage, combined to bring the excellent traditional Jewish-inspired score of Charles Strouse to life whilst the actors performed the songs around them. Maureen Lipman stepped up to the job of the narrator, linking the songs together for the benefit of the audience. As one of Britain’s top Jewish actors, she was the perfect choice, even though in some respects her purely expositional role was a thankless task. Given that the actors didn’t have the full dialogue to work with, they were remarkably efficient at presenting rounded characters, and hearing the orchestrated hits sung live proved a thrilling experience.

The story follows Rebecca, a young woman torn between Nathan, her Americanised husband determined to make it whatever the cost, and Saul, an idealistic worker whose revolutionary socialist leanings make him unpopular to bosses. The wonderful Caroline Sheen was impressive in the lead role of Rebecca, capturing her odd combination of feistiness and insecurity as an outsider. Her solo moments, such as with the song Children of the Wind, left many a spine tingling and more than a few pairs of eyes misting over. Graham MacDuff (looking every inch the moustache-twiddling villain of the Hollywood silent era) and Tim Rogers provided neat contrasts as the love rivals; whilst amongst the supporting actors the dashing James Yeoburn dazzled us as Ben, the loveable young man trying to make the best of his new life.

As well as commenting about poverty and the plight of the poor and destitute, Rags also raises the issues of workers’ rights and anti-Semitism. Its damning indictment of the American Dream may explain the show’s commercial (though not artistic) failure on Broadway; but on this evidence Rags is an overlooked musical that has a gripping story and a great moral and social heart. It may be set a century ago, but its themes and very human stories are universal and timeless.

Rags the Musical in Concert was a flavour of what a full production of the show could offer the West End, and a reminder of the class of the music and the power of the story. Is it too much to hope for a revival soon, preferably with this cast?

See the Centrepoint website for more details about the charity. Photos by James Wallace.