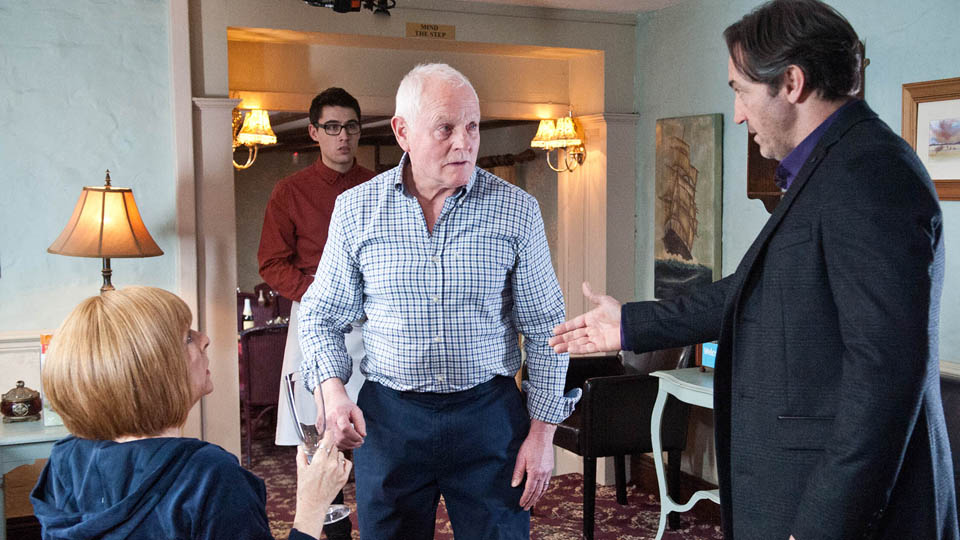 Val faces cyberbullying and a proposition from Ian

Finn is shocked and offended when he sees a review for the B&B saying that someone who works there is HIV positive.  Because he’s gay he instantly thinks the comment is a dig at him and runs to the pub to show Victoria.  Val gets wind of it and in her usual understated way (we love Val!) storms into the pub and tells everybody that it is her who is HIV positive.

Determined to find out who the malicious poster is, Val gets Finn to help her go Troll hunting only to discover it’s her pseudo grandchild Jacob.  The same Jacob that Val caught stealing from the shop and selling on to his schoolmates.  Alicia is not happy with either revelation and grounds Jacob for the Easter break.

The man who gave her the HIV, Ian, shows up in response to Val having a go at him down the phone (when she initially thought he was the Troll) but after Eric erupts and punches him, Val agrees to have a chat with him in the pub.   She confides in Ian about her sex life problems and the pitying looks Eric gives her when he thinks she’s not looking, which prompts Ian to propose that she leaves Eric and moves in with him.  The suggestion is sealed with a kiss, as Eric watches in shock from afar.  More fireworks to come next week!

Debbie has a screw(driver) loose as she stabs a customer

Noone could blame her for being a bit overly cautious since her last boyfriend turned out to be a psychopath, but Debbie seems to be losing her grip this week.  Firstly, she’s had a burglar alarm fitted that’s faulty and is keeping half the village awake.  Then she’s called out to a breakdown where she meets a roadside lothario who asks her out but she’s panicked and having none of it.  When the man puts his hand on her shoulder to try and calm her, she automatically reacts by stabbing him in the leg with the screwdriver she’s holding.

Subsequently she’s picked up by the police and questioned at the station.  On/off lover Pete comes to the rescue though, when he manages to track down the victim in hospital and heavy handedly convince him to drop the charges.  Debbie shows her gratitude in the bedroom and it looks like she might actually be ready to go steady and not keep romping in secret.

Belle is determined to plead guilty

Teenager Belle believes that pleading guilty to killing best mate Gemma is the right thing to do, despite the prison term that could come with it.  The decision, alongside Zak letting Belle confess to the police in the first place, is driving a wedge between Zak and Lisa.

Zak also had the unenviable task of telling Dom that it was Belle that killed his daughter.  After lashing out at Zak he breaks down and realises that he can’t stay in the village any longer so makes Debbie an offer to buy him out of his share of the garage.

Katie encourages Chas to give it another go with James who even manages to get Cain to accept a pint.  We’re not sure it’ll be family holidays in a caravan in Skeggy just yet.

Bernice decides she wants to open a beauty salon and is surprised when the bank manager cites her lack of experience as a reason for denying the loan.

Edna wrestles with her conscience when a scratch card she’s given for her birthday is a big winner. Gambling is a sin and against her beliefs but can she really bring herself to throw all that money away?

Priya’s eating disorder is brought to the attention of Diane who has a heart to heart with Priya who opens up about her childhood and how the issue started.

Cain’s determined to get Belle to change her plea.

Alicia is worried about her families future as David is forced to keep a closer eye on Priya.

Declan finds out about Jai and Megan’s blossoming romance.

Donna and April are back in the village causing Marlon to think hard and raising suspicions about Donna’s true intentions.

Charity thinks she might be unexpectedly pregnant leaving Declan pleading to keep it and Jai furious.

Dom receives a gift from a mystery benefactor.

James is surprised to hear that Adam is 22.