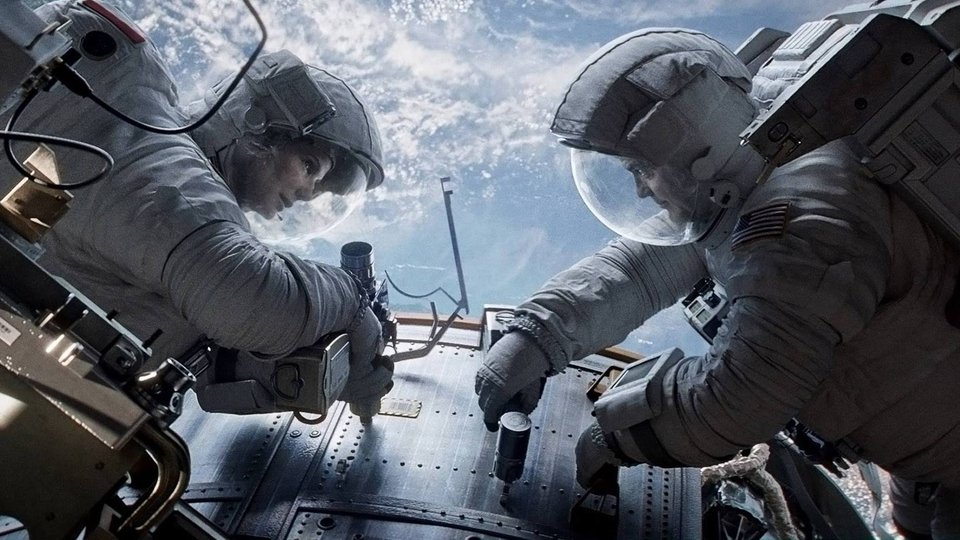 When a debris shower threatens the lives of some astronauts working on a satellite, its up to Ryan Stone (Sandra Bullock – Speed) and Matt Kowalski (George Clooney – From Dusk Till Dawn) to navigate their way to safety. With a risk of drifting aimlessly into Space and a fast-diminishing Oxygen supply, their odds of survival decrease by the second.

Gravity is the most agoraphobic and claustrophobic movie you’ll see all year (but in a very good way). Not since Duncan Jones’ Moon have we had a movie that changes the Space genre in such a positive way. Gravity is an assault on the senses that fully transports you into the precarious predicament of our heroine Sandra Bullock.

This is a movie with quality in abundance. Under the watchful gaze of director and co-writer Alfonso Cuaron and his brother Jonas, Gravity is a movie that gives you that wow factor from the start. The script is concise and to-the-point while its brisk pace always keeps you on your toes, ready for the next challenge onscreen. You feel like an astronaut whilst watching Gravity, thanks largely to the 360 degree motion of cameras that leave you feeling weightless (and at times even a little nauseous).

Despite boasting two A-list stars, Gravity is very much Sandra Bullock’s movie. She does a sensational job here, giving the role a true sense of identity and purpose. This role will almost certainly make her the front-runner for a second Oscar next year, such is the power of her performance. It’s also nice to see Bullock stretched as an actress – something her Oscar win for The Blindside has now afforded her.

We all love George Clooney and he can really do no wrong. This trend continues here with another standout performance that puts aside any doubt that he is the biggest movie star in the world today. He knows exactly how to pick a project and despite only having a supporting role in Gravity, its a performance of supreme strength and confidence that sets the story up perfectly. He also gives Sandra Bullock a great platform to bounce off, with the two Hollywood elites giving some of their best performances to date.

UK effects house Framestore are to thank for the jaw-dropping visuals on display here. This is Space like we’ve never seen it before. It’s a stunning-looking project that always impresses and frequently steals the show from the actors. It perfectly conveys the beauty, but more importantly, the danger of space and just how helpless we all are in its grandeur.

As mentioned before, Gravity is the most beautifully rendered film you’ll see all year. Full of breathtaking spectacle, tangible effects and an awe-inspiring approach to its CGI, this is a movie that shows you something inherently different from what we are used to. It’s not often we can say this, especially within the Sci-Fi genre, but Gravity raises the bar to considerably new heights. This is one movie you cannot afford to miss.