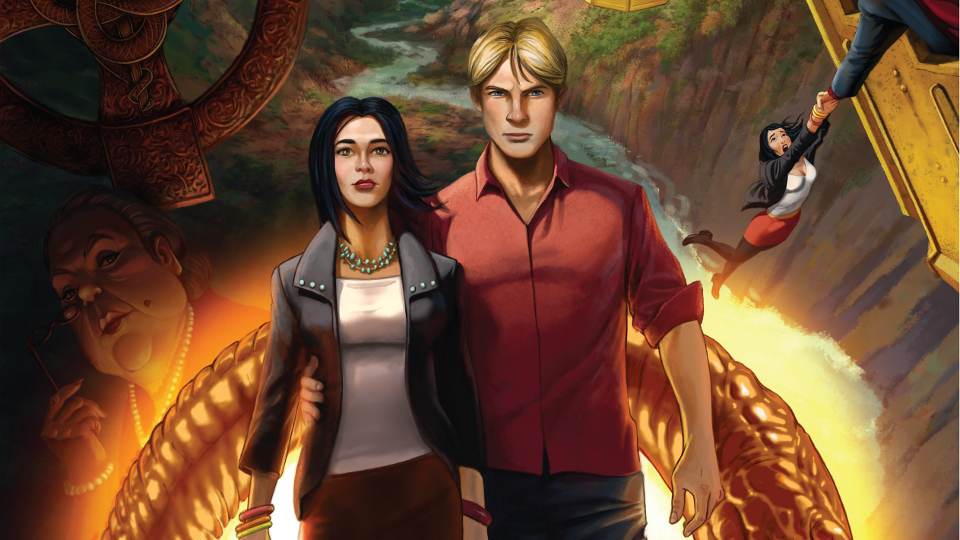 It’s hard to believe we’ve been going on adventures with George Stobbart and Nicole Collard for almost 20 years. Fans of the Broken Sword series have been waiting for a new game since 2006. Charles Cecil and Revolution Software announced the fifth game in the series, The Serpent’s Curse, on Kickstarter in August 2012. The fans got straight behind the game and managed to pledge 40% of their $400k goal in 24hrs. By the end of the campaign they had almost doubled their goal.

Our favourite in the Broken Sword series is still The Shadow of the Templars which was the first title. With a move to 3D graphics for the third and fourth instalments the series lost something. Although The Serpent’s Curse uses 3D models they are rendered in a cell-shaded style with hand-drawn background visuals. Aesthetically it’s much more like the earlier games and this is a good thing indeed.

The first part of this new adventure begins in Paris with George and Nico attending an art exhibition. When the pair get together things always go wrong and it’s not long before there’s a robbery and murder to solve.

The game is spread out over a few locations that you’ll travel between when necessary. Most of the time you take control of George but some parts you use Nico instead. At each location it’s a case of talking to everyone around and identifying all the interactive objects and items. As you investigate you slowly begin to get an idea of what is required in order to progress.

These are usually puzzles that must be solved and there is a great variety on offer. Examples include getting a policeman to move away from a door he’s guarding, rewiring a car’s horn, piecing together a shredded letter and opening a secret compartment on a desk. The puzzles are all pretty logical and while you might not solve them straight away when you do it is incredibly satisfying. There’s a hint system in place if you get really stuck but we didn’t need to use it.

We must admit that early in the game we were a little underwhelmed and the pace felt too slow. However we might just have had too high expectations. Once we hit our stride and got further into the game and its mysteries we couldn’t stop playing.

Episode one takes about five hours to play through and as it’s linear you’re unlikely to do so again anytime soon. The story is strong and it’s clear that a lot of effort went into the backstory. There’s some humour to be found in the dialogue and the voice acting is extremely well done throughout.

The first episode of Broken Sword 5: The Serpent’s Curse is a return to form for the series. Predictably it ends on a cliffhanger of sorts but it left us excited to move onto part two when it releases later this year. Long-time fans of the series and anyone who enjoys the genre should definitely pick the game up.