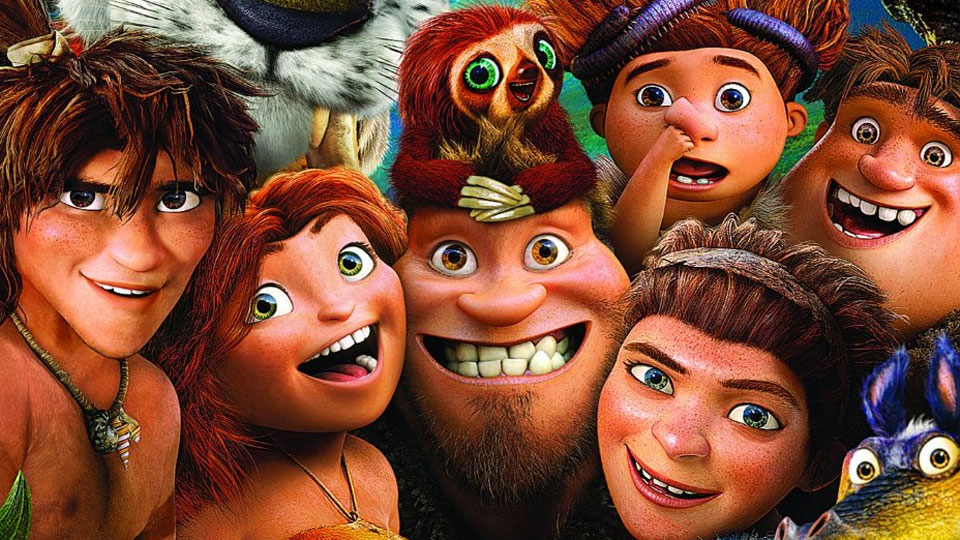 Grug (Nicolas Cage) is the head of a family of cavemen and an over-protective father to Eep (Emma Stone) and Thunk (Clark Duke). Along with his wife Ugga (Catherine Keener) and mother-in-law Gran (Cloris Leachman), Grug wants to keep his family safe and is worried about what would happen if they left the cave and their survival was threatened. When Eep sees a light moving outside the cave, she goes against her father’s wishes and leaves the cave meeting adventurous Guy (Ryan Reynolds). When an earthquake destroys the family’s cave, they go on an adventure with Guy to find a new home.

The Croods is an animated family movie from DreamWorks and it grossed nearly $600 million at the global box-office. It should be no surprise then that a sequel is in the works with a tentative 2017 release date. It’s not hard to see why The Croods struck a chord with audiences as it’s an old-fashioned adventure that will be adored by families. With a story co-penned by Monty Python’s John Cleese, The Croods is a funny, engaging and lovely little film that doesn’t outstay its welcome and thoroughly entertains.

The main theme is the fear of change and new things. When we live in a world where things seem to change constantly it’s no surprise that some may find this a bit difficult or daunting to keep up with. In The Croods it’s the father of the family Grug who is afraid and keeps his family in check by telling them stories to frighten them into staying in their cave. Once they are outside of the cave the destruction and danger they find themselves in seems to qualify Grug’s concerns but soon they realise there is much more to the world than the limited experiences they’d had until that point.

The Croods features an all-star voice cast including Nicolas Cage, Catherine Keener, Emma Stone, Ryan Reynolds and Cloris Leachman. It’s Emma Stone and Ryan Reynolds that really stand out as the central characters of the movie. Stone brings a loveable sense of adventure to the role of Eep whilst Reynolds is great as the forward-thinking Guy who gets locked into an unwanted battle with Grug. Cloris Leachman steals all of the best lines as the grumpy Gran and she brings a lot of comedy to the movie.

Extras on the release include a featurette (Belt’s Cave Journal), a selection of deleted scenes and trailers for other DreamWorks movies.

The Croods is great fun for the whole family and we can see a lot of families gathering round the TV on Christmas Day to watch the movie. There’s plenty to be enjoyed by all ages but it is the kids that will get the most out of it. It’s refreshing to find a family movie that has a simple yet effective plot and is a whole heap of fun. Make sure you see The Croods and be prepared for your kids to have it on repeat throughout the festive period.