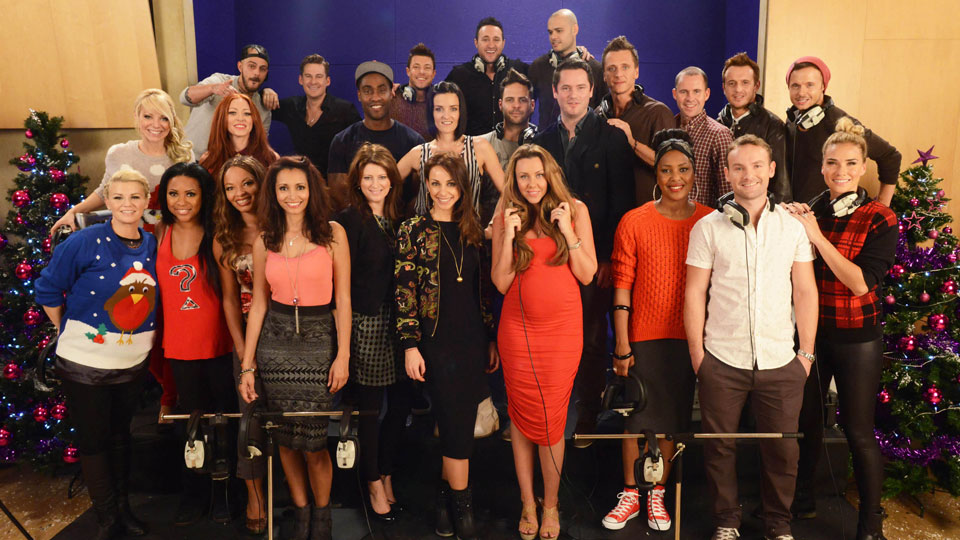 The Big Reunion has been one of the biggest surprises of the year since it debuted on ITV2.

Reuniting some of the biggest pop groups from the 90s and 00s, the show saw Atomic Kitten, Honeyz, B*Witched, Liberty X, 911, 5ive and Blue get back together to share stories of their heyday and put on a one-off show. It proved so popular that the groups embarked on an arena tour and have a Christmas tour underway this month.

They have also come together to release a version of I Wish It Could Be Christmas Everyday in aid of ITV’s Text Santa which is released on Sunday.

We caught up with Liberty X’s Kevin Simm to talk about the Christmas single, discuss The Big Reunion experience and find out his plans for 2014.

How are you today Kevin?

I’m good thank you. It’s a bit cold up North!

The Big Reunion is releasing a Christmas single in aid of Text Santa this year. Tell us about that.

We were asked to come together and record a single for Text Santa. We jumped at the chance as it’s a great cause obviously. It was just a good project to be part of and we’re all happy to do it. It’ll be exciting to see how it does. The main reason behind it is to raise as much money as possible and hopefully with the Text Santa charity and the programme that goes out in December, hopefully it will get people wanting to go and buy the single.

Text Santa supports a lot of different charities. Is it important for you to be able to give back at this point in your career?

Yes it is but all the way through Liberty X we always supported charities and did the single for Children In Need. We performed at lots of different charity functions. I think since we’ve all had children you look at charities a bit more seriously now because you see what some children go through. As much as we can help out, we’re happy to do that.

Whose idea was it to cover I Wish It Could Be Christmas Everyday?

That was ITV’s decision so none of us had a say in what the single was going to be. We were all excited but dubious at the same time, as to what song they were going to pick. It was good to go with an old classic because obviously everyone knows it and it’s a bit of fun. It’s probably the best chance of shifting some singles and making some money for the charity I think.

Yeah! I hope that our version has that sort of effect as well. I don’t think you’ll ever touch the original version, especially with Christmas songs that are so iconic, but hopefully we’ve done a decent enough version of it that people will enjoy it and decide to purchase it.

Tell us a bit about what your year’s been like since The Big Reunion took off.

It’s been great and surreal if anything. Doing the shows has been amazing and it’s been like rewinding seven years or so. Getting in front of crowds again and doing arenas, and getting recognised more again is a bit weird. At the same time every time we’ve done something with The Big Reunion whether it be the series or the tour, it’s only lasted a couple of weeks. You go and do it and live that life for a while then you go back to your normal life. The only way I can describe it is surreal. It’s like being a part-time popstar and then going back to your life and doing the stuff you normally do.

What’s the dynamic like within Liberty X now? Is it the same as it was or are you all a bit older and wiser now?

It’s pretty much the same as it was but just a bit better now. It was always good with us. As you would have seen with the TV show we didn’t have a bad split or hate each other’s guts or anything, we just decided to call it a day. There have been times between splitting up and The Big Reunion where we’ve gone to each other’s weddings and seen each other at various things and had a good laugh. The only way I can describe it is like when you’ve got a best mate you don’t see for ages and then when you go out with them everything goes back to how it used to be. It’s like you’ve not spent any time apart and that’s what it’s like. I know it’s a bit clichéd but that’s how it is with us. I think we are a bit wiser, a little bit older, a bit grumpier but it seems to work for us (laughs).

The Big Reunion Christmas Party is underway. What can people expect from the shows?

It’s similar to the last one but rather than everyone doing their old hits, there is a set where we do Christmas covers. It’s going to be fun. Before the shows started we didn’t know what the other bands had chosen so it’ll be a good laugh. It’ll be better than Panto.

I don’t know if I’m allowed to say. It’ll be a surprise! We’re doing more of a carol-type song whereas some of the other groups are doing songs like Last Christmas. Whether or not that’ll go down well we don’t know.

Yeah, I think so. The pop songs released around Christmas are brilliant and it makes Christmas but at the same time there’s nothing nicer than a carol you’ve grown up with since you were small. I’m sure it’ll be quite magical performing it in arenas.

What’s been the biggest highlight of The Big Reunion experience for you?

It’s strange! I’ve got a child and a wife and leaving them is difficult. Back in the day we could do what we wanted because we had no ties. At the same time I did enjoy going out and having a bit of freedom. The shows in the arenas have been amazing and to do The O2 was a big massive highlight because it wasn’t an arena when we were around. From a personal perspective it’s been nice to get good feedback on my singing. Back in the day it was overlooked that everyone in the band could do something and it was more about tabloids and the girls. Some people didn’t even know that Tony and I were in the group.

It’s odd but because of the sort of group we were and the kind of videos we did, and also Tony and I weren’t like Peter Andre with six packs (laughs) and floppy hair, I suppose the girls did take over the image of the group. Some people didn’t even really listen to the songs and were more interested in the hype and the group. Even with The Big Reunion I’d looked at reviews after the Hammersmith gig and they were saying they didn’t even know there were boys in the group. I don’t know if it was people just taking the piss but it was nice to get noticed a little bit. I’m not bothered about anything else. The reason I wanted to be in Liberty X in the first place was to sing not to be recognised by the punters.

What’s the plan for 2014? Will Liberty X be recording new music or will you be working on more solo material?

I don’t know to be honest. We’ve said that we’ll go out and gig for as long as we’re wanted. I really don’t know if we’ll get back in the studio. I’m going to be doing a bit of writing. I’ve got a new baby so my life is going to be pretty hectic from now on for a good while I’m guessing. It’s just finding time to do things. I have to be realistic and if the opportunity arose to do stuff and it would work out then it would be good to do it. I think with us all having kids to provide for we don’t want to be taking too many risks just to be staying in the limelight. It is addictive going out on tour and doing those things but from the beginning we’ve always said this is what it is, it’s The Big Reunion so we’re not going to get to used to it and just enjoy it.

What will you be doing for Christmas? Putting your feet up once the tour is finished and spending time with the family?

Christmas is just going to be a family affair I think. I’ve got a few solo gigs around Christmas and New Year. Mostly I’ll just be chilling with the family.

The Big Reunion Christmas single, I Wish It Could Be Christmas Everyday, in aid of Text Santa, is out December 15 on Universal Music. ‘The Big Reunion’ Christmas party tour is currently under way. Check out the video below: