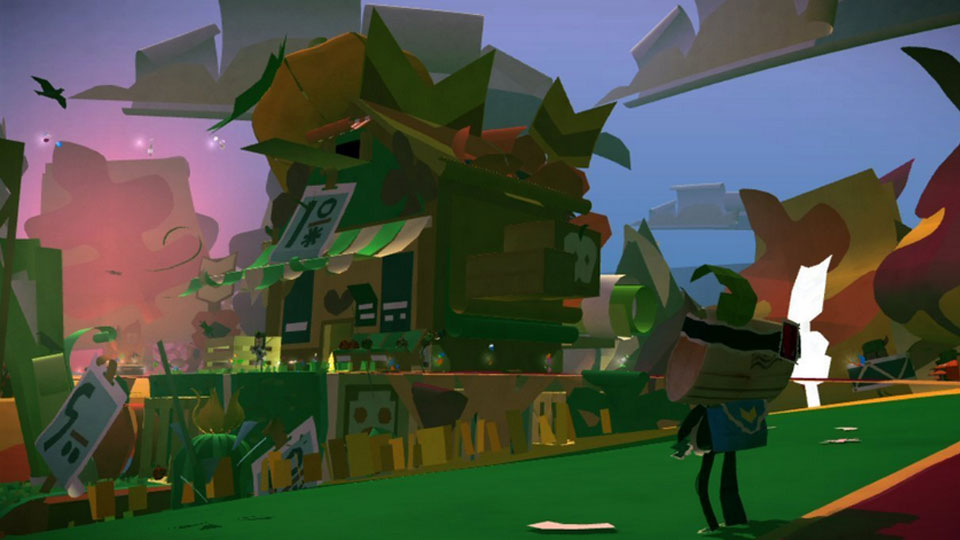 Media Molecule is best-known for their innovative and critically-acclaimed series LittleBigPlanet. For their latest venture they have released PS Vita exclusive Tearaway which is a platform video game with a similar aesthetic quality to LittleBigPlanet but a completely different gameplay experience. Taking control of a messenger – you can choose between male Iota or female Atoi – you must guide the character to help them deliver a message to you.

Yes you read that right. The PS Vita camera puts your face in the big beaming sun that resides high in the sky over the Tearaway world and it’s the sun the messenger is trying to reach. Tearaway is a world made out of paper with all of its inhabitants also made from it. Visually the game is a feast for the eyes and is part of the reason that it’s already attracting such widespread critical acclaim. There’s no denying that the game looks absolutely gorgeous and you can spend a large chunk of your time just admiring the environments and landscapes.

Tearaway is a fully immersive experience that utilises all of the PS Vita’s controls in a natural and engaging way. For example throughout the game you can use the sensor pad on the back of the handheld to poke your fingers into the Tearaway world and manipulate the environment. You’ll find yourself rolling logs around, deterring baddies and helping your messenger through this control. This also comes into play to use trampoline like drum covers which help you climb environments. Often throughout the game you encounter objects that need to be unwrapped which are denoted with shiny, silver paper. You use your fingers on the touchscreen to pull them apart and discover what’s inside of them.

Throughout the game you can customise your messenger adding stickers to them and rearranging their look. This will be very familiar to any gamers who have played LittleBigPlanet and it’s a nice little additional touch to the interactive nature of the game.

There is an element of combat in Tearaway but it’s by no means its strongest feature. Most of the time you are required to dodge enemies, known as scraps, as they hurtle towards you before they knock themselves out. Once they are dazed you can pick them up and throw them wherever you like or use them to get rid of other scraps.

As you work through Tearaway you’ll be asked by its inhabitants to carry out quests. Some of these include drawing and designing objects for them, such as a crown for a squirrel, whilst others see you battling enemies or interacting with various parts of the environment. The tasks are really quite creative and inventive, and even though they are simplistic in nature there’s a beauty to the experience that you simply don’t get with most other games.

If you like your games to be creative, inventive and visual then Tearaway is just the ticket. The game can get a little repetitive in parts but its beauty will keep you interested long enough to work your way through to the end. Tearaway is a worthy successor to the almighty LittleBigPlanet and we can’t wait to see what Media Molecule come up with next. There’s certainly no other game like this on the market and dare we say it’s one of the only ones to actually fully utilise the PS Vita’s unique control system.

In this article:PS Vita, Sony, Tearaway