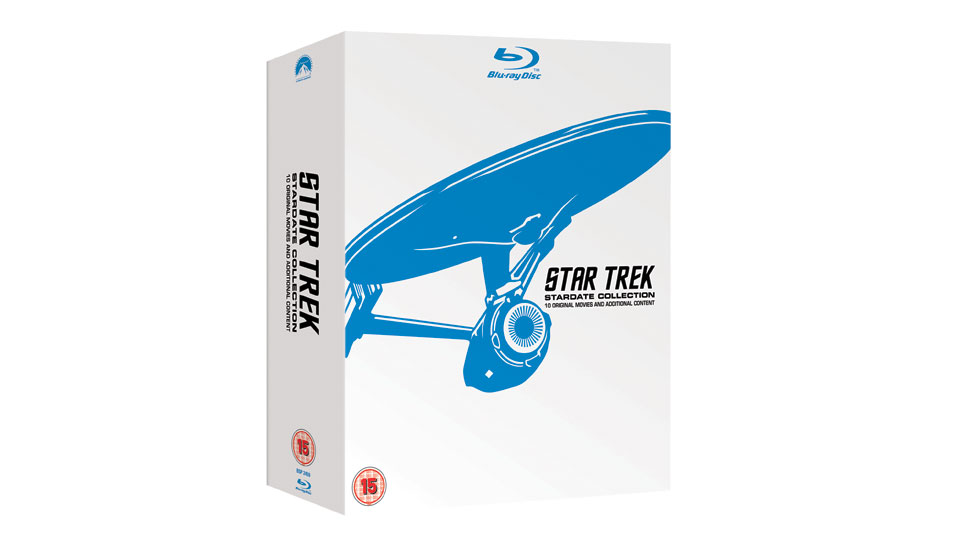 Knowing how huge a franchise Star Trek is now, it’s hard to believe that the original TV series was cancelled after only three seasons back in 1969. It would be 10 years before Star Trek made the leap from small screen to big screen and nobody could have predicted that it would spark off a film series that has so far resulted in 12 movies. At the global box office Star Trek has taken nearly $2 billion which is nothing short of extraordinary. The 10 original movies released between 1979 – 2002 have been remastered and released on Blu-ray under the title Star Trek Stardate Collection.

Star Trek Stardate Collection is a 12-disc Blu-ray set featuring the 10 original movies – The Motion Picture, The Wrath of Khan, The Search for Spock, The Voyage Home, The Final Frontier, The Undiscovered Country, Generations, First Contact, Insurrection and Nemesis – and two discs packed with bonus features. It’s fair to say that as a body of films the Star Trek franchise has had its ups-and-downs but every one of these movies is worth a watch. Interesting it’s the second movie The Wrath of Khan that is the strongest of the bunch closely followed by eighth movies First Contact which focuses on Captain Picard (Patrick Stewart) and characters from The Next Generation.

The original Star Trek movie is one of the weakest of the bunch. It looks absolutely fantastic, and the restoration is outstanding, but the storyline is a little meandering and very slow-paced. It will very much depend on your memories of Star Trek and your era as to which of the movies you’ll enjoy the most. Another highlight is The Voyage Home where Captain Kirk (William Shatner) and the crew have to return to Earth to deal with the aftermath of their rescue mission for Spock (Leonard Nimoy) in third movie The Search for Spock.

Each of the movie discs is packed with additional features. There are audio commentaries for every single movie, BD-Live features and more featurettes than you could possibly ever hope for. The featurettes take you behind-the-scenes of the movies, focus on specific characters and really dig into the history of the franchise. In total there’s more than 8 hours of bonus features across the discs which should definitely keep even the most hardened of Trekkies happy for a long time after they rewatched all of the movies.

The two discs of special features are one of the biggest hooks of this boxset. One disc contains Star Trek The Captains’ Summit which is a 70-minute roundtable event which sees William Shatner, Leonard Nimoy, Patrick Stewart and Jonathan Frakes talk candidly with host Whoopi Goldberg (who of course has also been a part of the Star Trek universe) about their experiences with the franchise and the impact it’s had on their lives. The second bonus disc featured Star Trek Evolutions which offers an in-depth look at how the different aspects of the franchise have evolved over the 10 movies in the boxset. There’s lots of insight into the favourite moments from the series as well as chat with the actors who have played villains over the franchise’s history.

Packaging wise Star Trek Stardate Collection takes a less is more approach. A chunky Blu-ray box holds all of the discs along with a booklet detailing the synopsis for each movie, extras details and imagery from the films. The box is covered by a cardboard sleeve depicting the U.S.S. Enterprise on the front. It would have been nice to have given fans a boxset a little more like the recent Indiana Jones one which featured key art and a fold out case.

It’s fair to say that Star Trek Stardate Collection is a must-have for fans of the franchise. Not only have all the films been restored wonderfully but there are hours of special features packed in too. You don’t have to have seen the various Star Trek shows to understand what’s going on and for the most part the movies work as standalone films. It’s a pure joy to revisit these classic movies and with the reboot currently doing the business and onto its second film, we have a feeling that another Star Trek boxset may be in the works further down the line encompassing all of the movies.