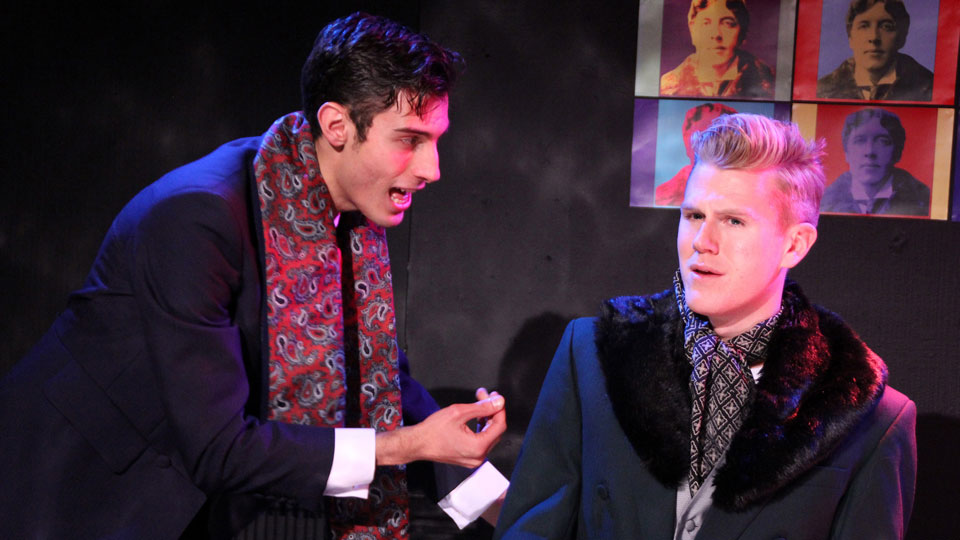 An hour-long musical version of Oscar Wilde’s comedy The Importance of Being Earnest makes for a witty and enjoyable show at the Etcetera Theatre in Camden.

With many of the best-loved lines retained and mixed in with brand new songs by Phil Jacobs, Ernest (a product of All in One Theatre Company) proves to be the best of the original with a fair amount of its own inventive humour, with some delicious rhyming lyrics.

When Jack Worthing (Samuel Harris) becomes engaged to Gwendolen (Cassandra Foster) his fiancée is under the impression that she is betrothed to his invented mischievous brother Ernest.  Jack’s close friend Algernon (Linford Hydes), also masquerading as Ernest, becomes betrothed to Cecily (Ella Duncan). When the women discover their deceptions the nuptials appear to be off…

The music for Ernest is played on keyboard (set to piano), which benefits the small space since anything more, especially percussion, would drown out the actors. There are one or two catchy songs, and the segues into the musical interludes have been carefully thought through.

A standout performance is Linford Hydes as Algernon Moncrieff. Admittedly, he has the best part with all the funniest lines, and everyone prefers the rakish Algernon to the stolid Jack: but Hydes makes the most of his good fortune and combines a flair for physical comedy with an enjoyably crisp delivery of dialogue. He’s a lot of fun to watch but remains truthful to the character.

The direction (Pamela Schermann) is necessarily pacy, with a good handle on humour, and the show rattles along at terrific speed, playing (as it should) as farce. Although running to sixty minutes, the show feels even shorter thanks to the unrelenting pace and the engaging storytelling. There are some neat touches that maximise the space such as using an onstage mannequin to drape clothing and props over to aid snappy costume changes and scene transitions.

There are one or two elements that haven’t been fully thought through: the bookending scenes set contemporarily don’t feel integral to the show and the idea that modern day characters escape into Wilde’s world (as evinced in the programme notes) doesn’t come across clearly. The performances are mixed too, with a few instances where the singing voice is better than the acting; and a mixture of performance styles rather than a uniform house style. Still, some of the shakier aspects of the production will bed in as the run progresses.

A little rough around the edges perhaps, but Ernest is an uncut diamond with a great idea at the heart of it. Charming, clever and good fun, the show deserves an airing at a festival. You can catch it at the Etcetera Theatre until 8th December.