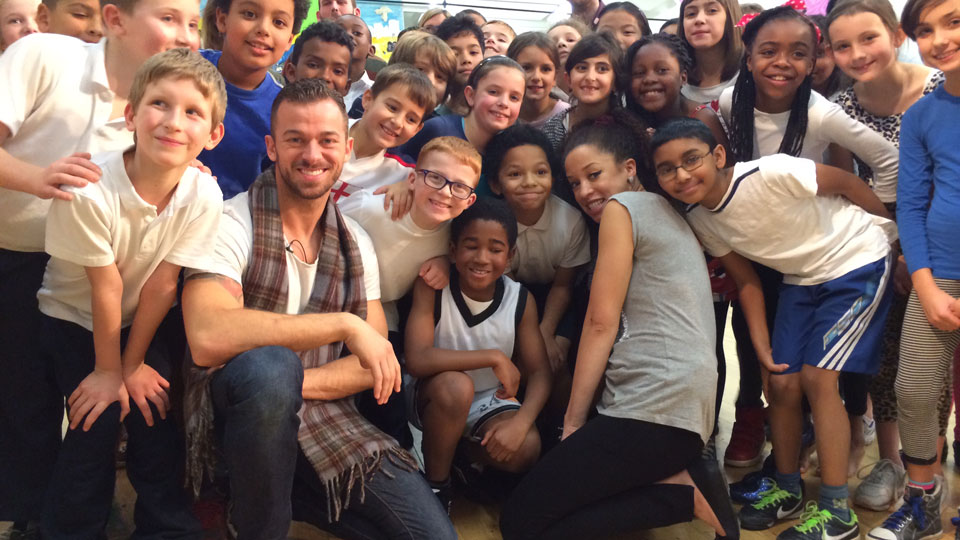 On Wednesday Strictly Come Dancing stars Natalie Gumede and Artem Chigvintsev visited a local primary school in Kentish Town to give the pupils a sneak peek of their Tango and to show the children how much fun dancing can be.

After seeing children dancing during the Blackpool live show last week, Natalie and Artem wanted to visit a school to inspire them.

Natalie said: “They were so confident and so good to reach that standard at such a young age. It really made me think of my confidence, the kids don’t have that projected until they’re older. They don’t worry about fear, it’s great, we need that as adults.”

Their appearance sent the children wild and Natlaie and Artem were met with cheers, screams and plenty of hugs.

Natalie said: “Artem and I visited a local school to show them some of our Tango. We were both really daunted before we went in there. Neither of us have children and don’t spend much time with them. We didn’t know if they enjoyed strictly or knew who we were, or what they’d think of us coming in. what was so lovely was just their energy, it really gave us a boost and they weren’t watching with any judgement or expectation. We’re only half way through rehearsals, so it’s not at its best. They just enjoyed two people coming in and being engaged, it probably gave them a nice break from lessons. We probably got more out of it than they did. It really has energised me for the weekend. This process can really drain you, but kids are really honest and straight forward. They really remind you of what’s important.”

Artem added, “Going to a local school today and doing a little performance and to see the children’s eyes because they’re so happy to see us dancing and to get such a positive reaction, walking away I felt good. It’s a nice feeling to have.”

You can see Natalie and Artem’s Tango tomorrow night at 6.30pm on BBC One and BBC One HD. Check out some pictures from their school visit below: