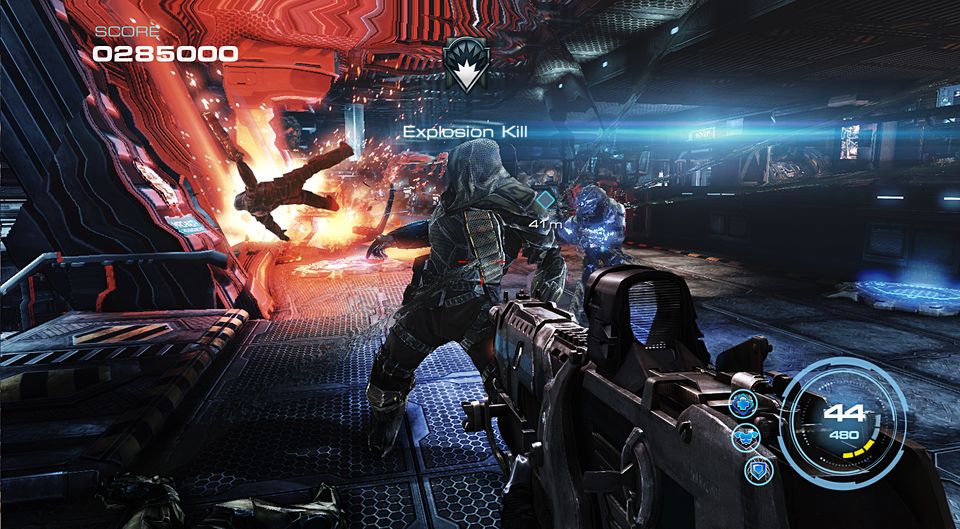 Alien Rage is a sci-fi shooter from Polish developers City Interactive. The game is powered by the Unreal Engine and is available for PC, XBLA and PSN. As you may have guessed from the title shooting aliens is the order of the day. We’ve been spending time with the PC and XBLA versions to see if it’s worth your time.

The game begins with a little story to give you a proper excuse to shoot and kill everything that moves. Set over 200 years in the future the Human race has taken to the stars. They’ve found a new power source called Promethium which is incredibly powerful but hard to come by as it’s very rare. Fortunately a giant asteroid has been discovered and it’s absolutely crammed full of the stuff.

Unfortunately an alien race known as the Vorus has discovered it too and war breaks out. Too stubborn to just give in the Humans decide the best thing to do is to send a special team in. Their mission is to destroy the asteroid and every alien that gets in their way. The story may be brief but it has enough detail to get you interested. Once the scene is set it’s time to get angry, grab plenty of guns and kill lots of alien scum.

If you’ve played any other Unreal Engine powered game then you’ll know what to expect. The visuals are gorgeous but have that familiar look about them that. The choice of engine really suits this kind of game though and the graphics are definitely the standout feature.

The single-player campaign spans 14 missions where you get to battle against over 20 different alien enemies as well as some boss fights. The aliens are fast moving and will often just rush at you guns-blazing. This means that staying alive demands quick reflexes – especially on the harder difficulties. At times the difficulty actually feels very unfair and you can expect to replay the same sections over and over again.

The game is very linear and it makes heavy use of scripted events. Often the game is waiting for you to shoot the correct explosive barrel in order to trigger the next spectacular explosion. During the campaign you discover a variety of over-the-top weapons and each also has an alternate fire mode.

Alien Rage isn’t the longest game in the world as it wants you to replay it. To encourage you to do so there is an arcade-style scoring system that rewards you based on things like headshots, skill shots and accuracy. If chasing leaderboards or competing with friends is your thing then this feature will definitely appeal.

In addition to the single-player campaign the PC version of the game also features an online multiplayer component. Why it was left out of the console releases is a mystery and also a shame. On the PC version it is almost impossible to find anyone to play against. We’ve only managed a couple of games with one or two other players despite weeks of trying.

The multiplayer that is there is a simple team deathmatch mode that plays like so many other shooters. The weapons feel good and the maps are well designed. We imagine it is pretty fun with a full lobby but with no community it’s boring.

Alien Rage provides an average shooter experience that will appeal most to old-school shooter fans. It tries to be hardcore but sadly falls short of the mark. Competitive players might like the arcade scoring system but most won’t want to play through the game more than once. The game doesn’t do a great deal wrong but it needs to do more to stand out in an overcrowded genre.