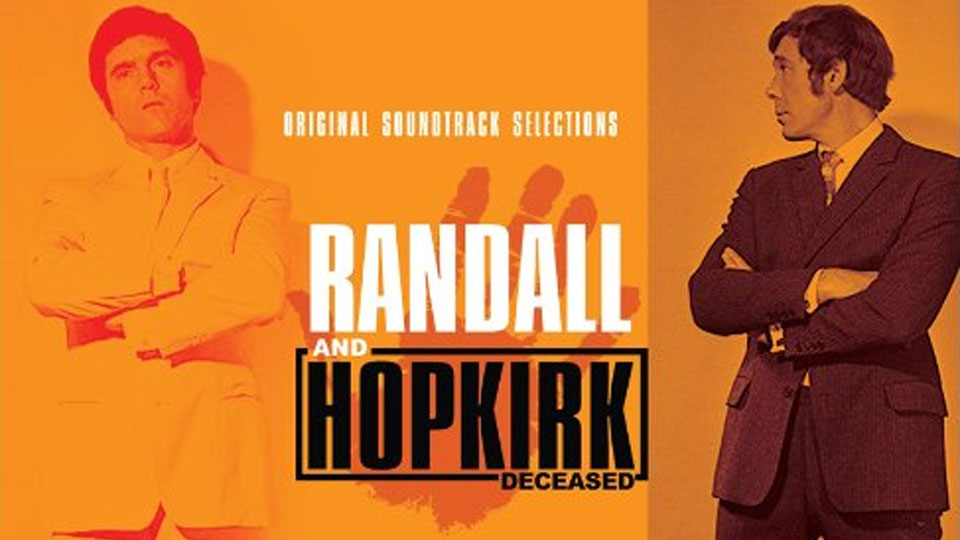 Very exciting news for fans of cult British television is that Network Distributing is exclusively releasing definitive soundtracks to some of the best-loved shows from the late 1960s and early 1970s. Two titles are currently available with more planned for 2014.

The soundtracks are released on very high quality 180g vinyl (you can feel the quality as they are heavy in the hand) and pressed by legendary record experts Pallas in Germany. The colourful gatefold sleeves featuring striking images from the series are another attractive feature. The music has been cut together by Ray Staff, the renowned engineer who was behind David Bowie’s Ziggy Stardust. Everything has been put into place to ensure that the sound quality is fantastic.

Enjoying an inaugural release, alongside Man in a Suitcase, is Randall and Hopkirk (Deceased). It was a hit show for Lew Grade’s ITC in 1969-1970. As a team of private investigators, Jeff Randall (Mike Pratt) and Marty Hopkirk (Kenneth Cope) had a unique advantage: Hopkirk was dead, and only Randall could see and talk to his ghost. It was quite a useful way of working together to fight crime.

The series boasts a cracking signature theme by Edwin Astley, who also composes the incidental music. Astley was brought in as a safe pair of hands since he had already scored several other hit ITC series, including the Roger Moore vehicle The Saint and the series that made Patrick McGoohan a household name, Danger Man (inexplicably renamed Secret Agent for American audiences).

Slow, macabre and funereal, Astley’s theme tune for Randall and Hopkirk (Deceased) is distinctive and intriguing. The use of the harpsichord is ingenious, as the instrument has associations with death; and the series would take a light-hearted view of the afterlife and the supernatural, finding comedic elements in the fact that one of its main characters is dead.

Astley also scores the incidental music for the series, which forms the majority of the soundtrack. Having created a notable signature theme, Astley often uses cues from it within a variety of musical pieces that incorporate different genres for the background music. Thus there is a slowed-down melancholic version of the theme with a lamenting clarinet on the first side. The music is ethereal and spooky but then exciting in turns. There’s no mistaking that it’s the product of an adventure show, and Astley makes ingenious use of wood and brass instruments as well as percussion to achieve the atmospheric effects.

The vinyl soundtrack is a beautiful collector’s item, and the extremely high quality of the product makes it a fantastic gift for vinyl enthusiasts. It’s certain to be a collector’s item and would be loved by any fans of the classic series who haven’t committed the ultimate act of sacrilege and parted with their turntable. The soundtrack in available exclusively from Network.