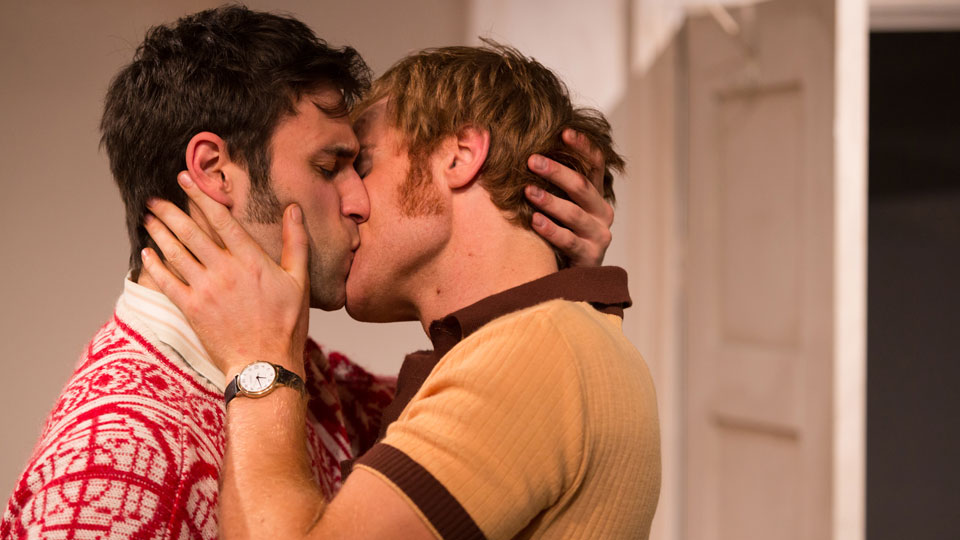 Martin Sherman’s gentle and touching romantic comedy Passing By has transferred to the Tristan Bates Theatre where it will play until the end of the month.

Toby and Simon meet at the cinema and one thing very quickly leads to another. But is it just a one-night stand?

Toby is an insecure, neurotic New York Jew, and has a tough time believing strapping jock Simon isn’t just going to break his heart. The more we learn about Simon the more we see his insecurities too – as an athlete he’s already past his peak, and he feels lonely in a big city. Somehow when they’re together they find contentment.

What was shocking about the play when it was first produced in the mid-1970s was that a gay couple could be depicted as both ordinary and happy. Sherman’s prescient piece, a landmark in theatre, remains as fresh as the day it was written. It’s only a few throwaway lines about the couple not being able to kiss in public (astonishingly it would have been illegal in New York until 1980) that jolt the audience into remembering how much has changed in the intervening years. Well, admittedly the gorgeous 1970s fashions worn by the actors and the attention to detail in the New York apartment set evoke the period (excellent work by Philippa Batt and Philip Lindley); but the play and its themes are timeless.

What unites Toby and Simon so quickly is illness. There’s humour in playing on the idea that even hypochondriacs sometimes fall ill, and Toby, after calling his doctor in a panic over a splinter in his toe early on in the show, takes to his bed with hepatitis. When Simon contracts it too, their enforced bed rest sees them bickering like an old married couple. There’s an astonishing amount of comedy eked out of the theme of illness: you’ve probably never laughed at a scene in which an exhausted sick man crawls out of bed to fetch some fruit juice for his equally stricken lover, but you’re guaranteed to break that duck here. It’s as hilarious as it is poignant, even more so for being played naturalistically.

James Cartwright and Rik Makarem prove perfectly cast as Simon and Toby respectively. Appearing comfortable down to a pair of y-fronts for much of the play (and we didn’t hear any complaints) Cartwright also lends Simon a childlike petulance to hide his vulnerability. Makarem is also completely convincing, with some lovely touches where he beats himself up for saying something idiotic to Simon. They bring the best out of one another: it’s the contrasts that create such a warm and watchable couple.

As we’ve come to expect from an Andrew Keates production, it’s directed with a delicacy of touch and a firm handle on pace, bringing the story fully to life.

Running to eighty minutes with no interval, the only downside to Passing By is that it does what the title suggests, and goes by all too quickly, leaving you craving longer in the company of Simon and Toby. Passing By is a terrific revival of a great play. If you haven’t seen it before, don’t pass up this opportunity.