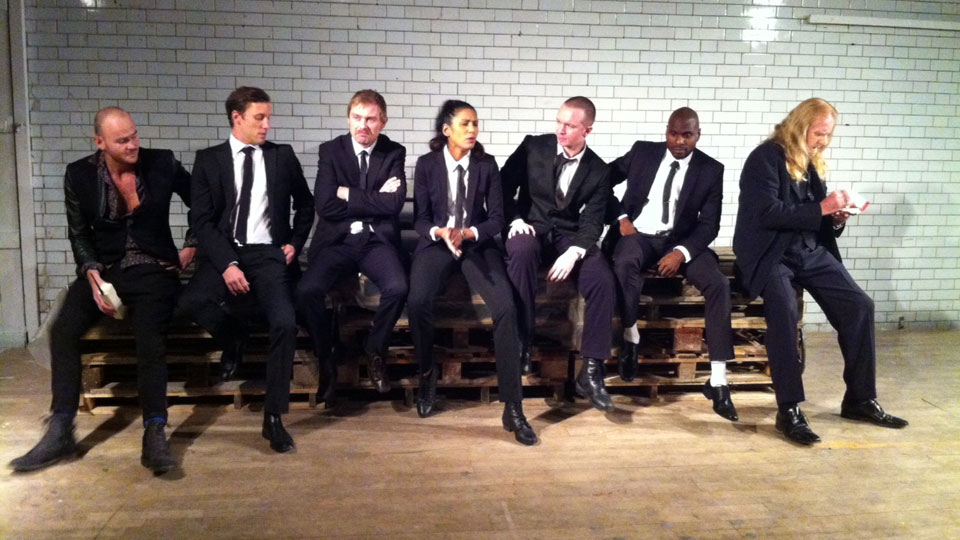 Secret Theatre has been a New York and LA sensation and has now travelled over to London. The concept they offer is “an immersive experience for the audience where you feel part of the production” where “titles are kept a secret, as is the location of the event, until you purchase a ticket”. It makes reviewing the show a necessarily sketchy affair.

For anyone fearful of audience participation events, don’t worry, this extends only to a few characters breaking the fourth wall. The current show is a re-enactment of a Quentin Tarantino movie (this is public knowledge, so no spoiler intended), with some witty dialogue added or transposed to offer it a British flavour.

The build up created by the concept even incorporated a late start, some ten minutes after the advertised time. That wouldn’t have been such an issue if the rest of the production, once it was underway, had been slick. Unfortunately the concept of keeping the title a secret from the audience seems to have extended to most of the cast as well. The majority are extremely shaky on their lines, constantly interrupting one another and fluffing dialogue. Again, that wouldn’t matter so much if the performances are otherwise excellent and you’re invested enough in the story and the characters to not care about the odd mistake, but the quality of the acting is, putting it politely, variable.

On the positive side, there are two standout performances that almost succeed in raising the overall quality. Stanley J. Browne invests his character with a credible moral compass that leaves him the most sympathetic of the disreputable group, whilst Harry Kerr is on terrific form with a fully-focussed performance, both cheeky and neurotic. They are the only ones who convince, and credit where it’s due, they are a lot of fun to watch.

The story plays across the length of a wide, tiled room. Iron girders holding up the ceiling ensure that much of the action on one side or the other is obscured for around half the audience, so pick your seats wisely. A sense of pace, easily achieved in the editing suite for a film, is something of an art form for theatre, demanding swift transitions between scenes and an economy of time. This is lost on the production, which ambles along thanks to actors having to walk around the audience to time their entrances. An inexplicably lengthy interval (surely half an hour can only be justified if there’s a major set change or make-up job required?) does no favours to the pace. The secret location doesn’t add to the atmosphere, it just means sitting in a draughty room for a few hours, and it ultimately hampers suspension of disbelief by stripping away theatrical technique. You can cover up pop guns in film through special effects, and more importantly, dubbed sound. In live theatre, there’s nowhere to hide.

We’re left unsure who this will appeal to. Movie buffs are likely to just watch the film, and people who don’t much care for theatre are unlikely to be warmer disposed to it on this showing. We’re not sold on the concept either. It’s a gimmick that’s only been partially thought through.