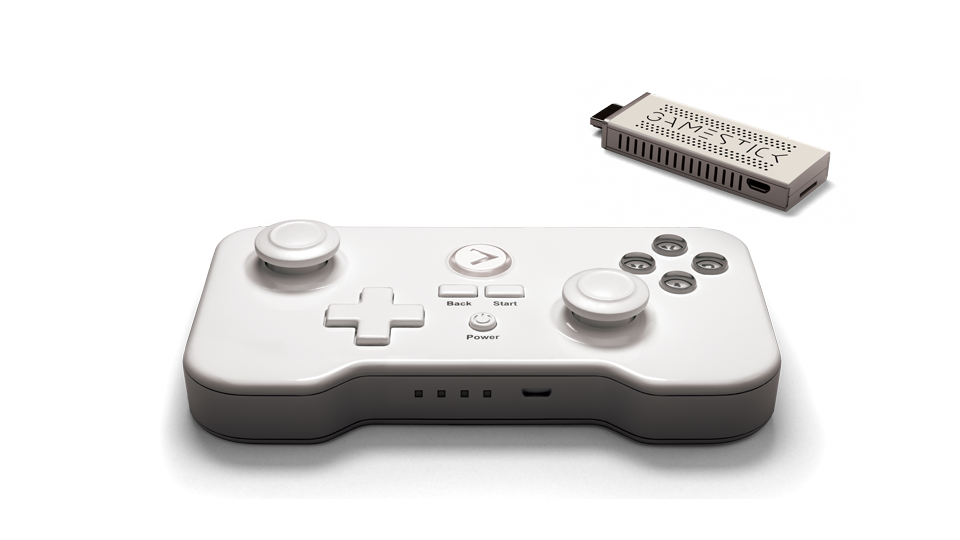 If the name PlayJam sounds familiar it’s probably because you’ve played interactive games via your Sky Box or a Smart TV. Their latest attempt to bring games to the living room is a cross between console and mobile gaming. We’ve spent the past couple of weeks with their new device – the GameStick.

The GameStick first grabbed our attention at the start of 2013 with a Kickstarter campaign. Dubbed the most portable TV games console ever created it also grabbed the attention of gamers around the world. The campaign was hoping to raise a sum of $100,000 but they smashed their target. With the help of almost 5,700 backers they broke $647,000.

Using their experience of bringing games to TV the team felt there was a gap in the market. This wasn’t to try and replace or compete with the Xbox and PlayStation. Instead their aim was to create a console-like experience without the high cost. The obvious choice to do this was the dominant mobile platform – Google Android.

First impressions count and when we got hold of our GameStick review unit we were immediately impressed by the quality of the packaging. The console comes in a small but sturdy box that measures roughly 20cm x 20cm x 6cm. The packaging is well designed with clear information and nice full-colour glossy images. It gives the impression of a high-end product and the packaging is not dissimilar to what we’ve come to expect from the latest smartphones.

As impressive as the packaging is it’s hard to believe that it’s big enough to fit a whole games console inside. Upon breaking the GameStick branded holographic seal and lifting the magnetic flap you are immediately presented with the GameStick controller which also contains the GameStick console. On the underside of the box lid is a nice touch which thanks the Kickstarter backers who made the device possible.

The inside of the box that holds the controller and other contents even has a nice velvety feel to it. The box opens up to reveal the full contents which are:

The controller seems large at first but it’s actually similar in size to the Xbox 360 and PlayStation gamepads. It features a layout most similar to the Xbox 360 gamepad with dual clickable analog sticks, a D-pad, start and back buttons, two shoulder buttons, A, B, X and Y face buttons and even a central guide button. The big difference is that the shape is rectangular and it’s quite flat at only 2cm tall.

The controller also has a power button, four white LEDs on the front side to indicate which controller number it is and a micro-USB port to allow you to charge it with the supplied cable. On the back are contacts to allow charging via the optional docking station a couple of reset buttons that you need a paperclip to access and a sliding button in the middle.

Initially the sliding button was a mystery but pushing it allows you to eject the GameStick out of the controller. The controller functions as a carry case for the GameStick when not in use and makes it easy to transport them together. When ejected there is a flap on the top of the controller that closes up and if you peek inside you’ll be greeted by some menacing looking eyes on the inside.

The main material of the controller looks very similar to that of the Nintendo Wiimotes and has a very plastic feel. The base of the controller though has a lovely silky feel to it which makes holding the controller a lot nicer. Although comfortable enough to hold it’s nowhere near as comfortable as an Xbox or PlayStation gamepad, especially during long play sessions. The D-pad is also quite noisy and the analog sticks feel large. It is much more suited to adult sized hands than childrens hands.

The GameStick itself is tiny with dimensions of 6cm x 3cm x 1cm. At a glance you could easily mistake it for a USB memory stick. Given the size it is truly impressive what PlayJam have accomplished. The GameStick has the same silky feel as the back of the controller with vents and the logo cut out of the casing to aid in cooling as it does get rather hot. When powered up a white light shines from within to match the lights on the controllers.

At one end of the GameStick you’ll find a HDMI port to allow you to plug it into a TV’s HDMI socket. Many TV’s have awkwardly positioned HDMI sockets so many users will make good use of the bundled HDMI extender cable. At the other end of the GameStick is a MicroSD Card slot allowing you to boost the onboard storage from 8GB to a maximum of 40GB with a 32GB card.

A slight downside to the portability of the device is that it requires external power. You can attach it to a mains socket or a USB device on a PC or console. The supplied USB cable also has a second socket to allow you to attach a USB memory stick or external hard drive for additional storage. The optional docking station also allows for expansion via SD card.

Once plugged in the console boots up in a few seconds and a press of the power button on a controller will pair it with the GameStick. Before your first use it is recommended to fully charge the controller. The initial setup is simple enough and allows you to enter your Wi-Fi details. A web browser is also needed to register your GameStick for the first time.

The GameStick store is quite basic to look at but simple to navigate at the moment. It does feel that it may need a rethink as more content is added. There are four main sections – Games, Media, Profile and Settings. The Games section has four categories – Featured, Play Now, Popular and All. Currently only Shadowgun and Smash Cops are free with the other games all costing between £0.99 and £3.99.

Before you can buy anything you must add credit to your account. When choosing something to buy you need to enter your account password each time. This is a little annoying but it stops younger players just buying things without permission. Once you’ve made a purchase the game is added to your download queue. After the download you must then install the game before you can play it.

Currently there are only just over 30 games to choose from and the quality of the selection on offer varies a lot. If you’re a fan of mobile gaming then there’s a good chance you already own several of the titles or have at least played them already. Currently the only way to add games is via the GameStick store. Games have screenshots and video but at the time of writing there are no demos available.

The two free titles are actually the best ones on there at the moment. Smash Cops actually seems to play a bit worse than the mobile equivalent. Shadowgun is the most impressive game and it plays like a Gears of War cover shooter. We initially struggled to play the game as the default sensitivity of the sticks is too high. However a quick change of the options rectified the problem making the game quite fun. The GameStick seems to cope well during play and all the games we’ve tried are perfectly playable.

The GameStick also features media playback capabilities thanks to the bundled GameStick Media Player and the freely downloadable Tofu Media Centre which is based on the popular XBMC. They can both play audio and video up to 1080p and the GameStick is silent. We’re sure there will be many people picking one of these up just to use as a cheap media centre. Sure it’s not as cheap as the Raspberry Pi but it just works right out of the box.

Overall we’ve enjoyed our time with the GameStick so far and feel it has a lot of potential. The biggest issue right now is that it’s screaming out for some killer titles. It’s an impressive piece of kit and a very capable device but it really needs developers to get behind it. Until it gets a few really decent titles we feel it may struggle to find an audience. Community features are also lacking but there are plans for social media integration such as Twitter and Facebook.

The GameStick is released today (October 29th) and costs £79.99. Extra GameStick controllers are £34.99 and the docking station is £44.99. For more information check out the official GameStick website.