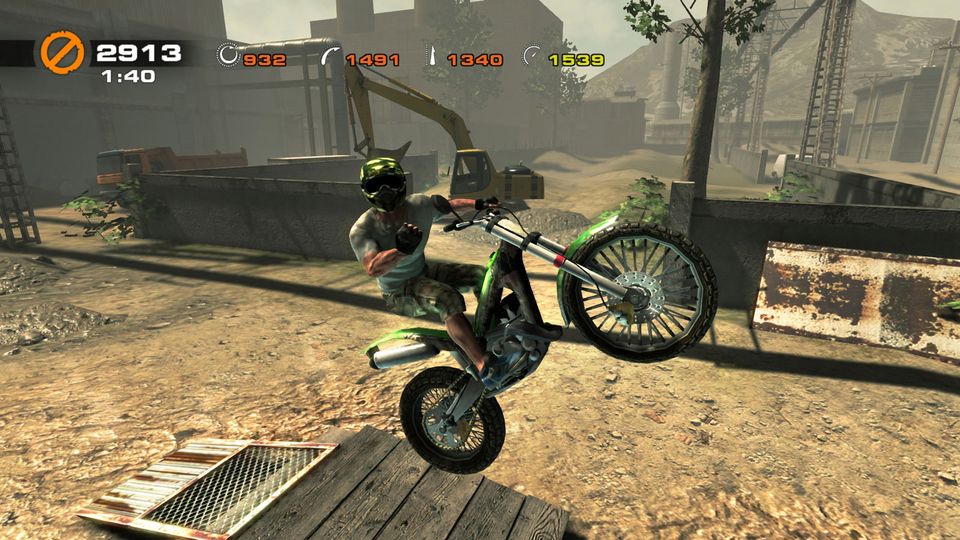 The Trials series from RedLynx is seen by many as an essential purchase on Xbox and PC. Sadly for PlayStation and Nintendo gamers the series never made it to their platforms. Presumably after spotting a gap in the market indie developers Tate Multimedia created their own similar title – Urban Trial Freestyle. The game was released on PS3, PS Vita and 3DS earlier this year and has now made the jump to PC via Steam.

Trials Evolution is the undisputed king of the physics-based platform racing genre and remains one of our favourite XBLA titles. It’s nice to see an alternative option available but Urban Trial Freestyle really has a mountain to climb in order to compete. The similarity of the two games also makes it hard not to compare them against each other.

The aim of the game is to ride your bike from one end of a level to the other. Ideally you should do this as fast as possible and without any mistakes. There are five different environments each featuring at least eight levels. Your performance in each level earns you a ranking out of five stars. You need to obtain stars in order to progress to the next level. If you don’t have enough stars then you will find yourself replaying earlier levels that you didn’t do so well on.

Your bike is controlled via the keyboard or a game controller. While perfectly playable on the keyboard we found it easier to do well with a controller. Levels are littered with ramps and obstacles so you need to carefully use your throttle and shift you weight in order to traverse them. It feels great when you get it right but the tougher obstacles can be frustrating until you master them.

There is no multiplayer option in the game but it manages to satisfy competitive players thanks to the world leaderboards. If you want to compete on these then you’ll need to spend a lot of time replaying levels until you get things just right in order to obtain a fast time. To help you the game lets you race against the ghost of the current world leader on each course. This allows you to see where you are going wrong as well as which sections you are doing well on. There is also a welcome option of just competing with friends.

As well as the main time trial game there are also a few challenge levels. These are a bit of fun and task you with things like getting as far as you can on a single tank of fuel or flying through the air using the force from exploding gas canisters. Most of these challenges need to be unlocked by beating the different worlds in the main game.

Cash you collect can be spent on customising your rider and bike. You can mix and match helmets, jackets, pants, shoes and gloves from five different themes. Before a race you can also customise your bike’s wheels, chassis and engine.

A neat feature is that the game will import your steam avatar which gets displayed on a billboard on the main menu. Billboards are also found throughout the tracks next to the different stunts you can perform such as the longest and highest jumps on particular sections. The top player for each stunt will have their avatar displayed in everyone’s game.

Graphically the game looks decent and very similar in style to Trials. The biggest difference is that there is a lot more going on in the background. While this looks nice it can be quite distracting and these scenes get repetitive fast.

The biggest issue we have with Urban Trial Freestyle is that there is no level editor. This leaves you with the same small set of repetitive levels to play on. Including a level editor would have given the game a much longer lifespan.

Urban Trial Freestyle is fun for a while but you soon realise it’s not in the same league as Trials Evolution. It’s a decent attempt by Tate Multimedia but easily the inferior game.