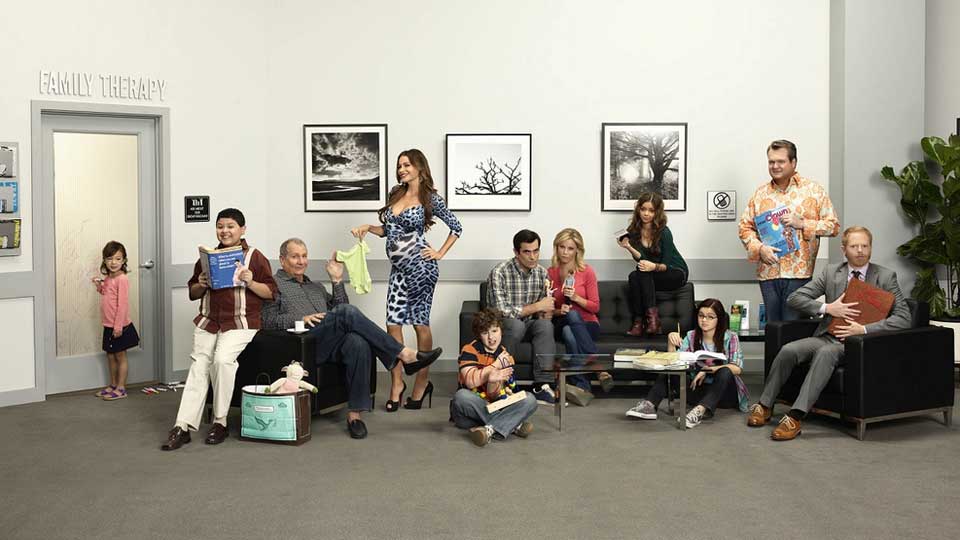 Modern Family is one of the biggest comedies in the US right now and is regularly nominated for top TV awards such as the Emmys. Since 2009 the show has pulled in stellar ratings, attracted the best guest-stars and received plenty of critical acclaim. In the US the fifth season of the show is underway and the show’s popularity is showing no sign of decreasing. Here in the UK the fourth season of the show has just been released on DVD and Blu-ray.

The Blu-ray released of Modern Family: The Complete Fourth Season features 24 episodes over 3 discs. The season opens with Bringing Up Baby which sees baby-related dilemmas for Cam (Eric Stonestreet) and Mitchell (Jesse Tyler Ferguson) and newly pregnant Gloria (Sofia Vergara). Over the course of the season it’s not just change for Gloria and Jay (Ed O’Neill) as the Dunphys have to deal with Haley (Sarah Hyland) going to college, Luke (Nolan Gould) starting to date and Alex (Ariel Winter) gets used to being the oldest sibling in the house.

We’re pleased to see that the fourth season of Modern Family has retained its razor-sharp wit and crazy shenanigans. One of the standout episodes if Open House of Horrors where Claire (Julie Bowen) tries to keep her enthusiasm for Halloween under wraps, and obviously fails, whilst Gloria’s temper is worse than ever as she gets used to being pregnant once again. Other highlights include When a Tree Falls where Cam and Mitchell try to save an old tree, Party Crasher where Gloria inadvertently manages to steal Manny’s glory, and Bad Hair Day where Claire goes to her college reunion alone and is surprised when Phil (Ty Burrell) turns up unexpectedly.

Guest stars come thick and fast throughout the season. Elizabeth Banks is hilarious as usual as Cam and Mitchell’s party-girl friend Sal who pops up again in with a surprise announcement in Best Men, whilst Benjamin Bratt is back as Javier in Flip Flop with a new fiancée in tow which worries Gloria, especially when her son Manny (Rico Rodriguez) starts to bond with his soon-to-be stepmum. Other guest stars over the course of the season include Nathan Lane. Shelley Long and Matthew Broderick.

Special features on the Blu-ray release include commentaries with the writers of the show, a gag reel, deleted and alternate scenes, and a director’s cut of the season finale. There’s also several featurettes taking you behind-the-scenes of the show with the cast and crew.

Modern Family: The Complete Fourth Season is as hilarious as ever. It’s no surprise that the show regularly pulls in huge audiences and has become a hit across the globe. The sharp observational comedy is one that many families can relate to and it perfectly captures the way a family relates to one another and the ups-and-downs they have. US comedy doesn’t get much better than this and we hope that Modern Family is around for years to come.