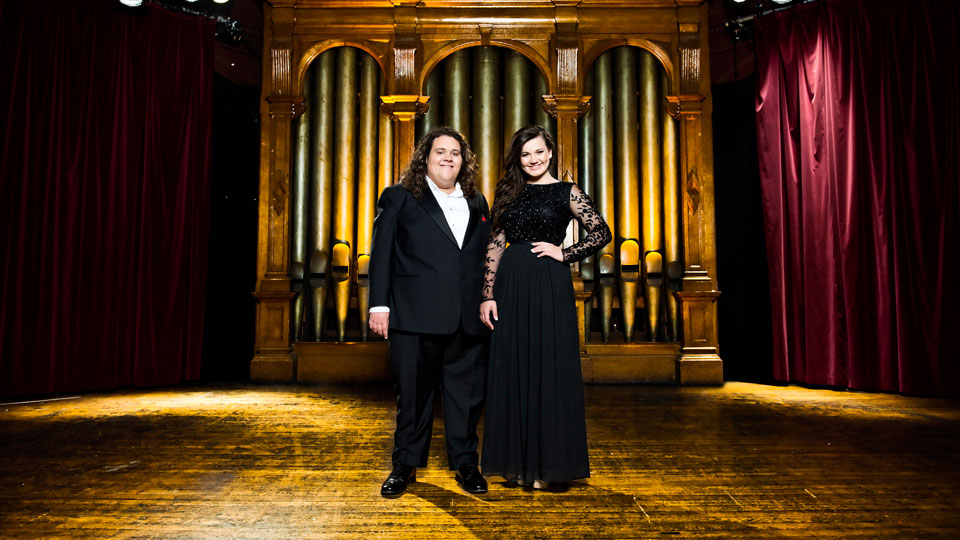 Jonathan and Charlotte have enjoyed a meteoric rise since they appeared on Britain’s Got Talent in 2012.

Their first album Together was a Top 5 smash and since then they’ve been busy touring and promoting. They’ve also found time to go into the studio to record new album Perhaps Love which was released this week.

We caught up with Charlotte Jaconelli to find out more about the record, talk about performing solo and to find out how they chose the songs that appear on the record.

I’m ok, cold but good! Currently sat on a train into London!

You’re on the verge of releasing new album Perhaps Love. Tell us a bit about the record and what people can expect from it.

Perhaps Love is a complete extension from our first album ‘Together’. We’ve matured so much with this record and have tried to put all of ourselves, and experiences into this album!

How did you choose the songs you recorded for the album? Was it an easy process?

Choosing the songs was easier than I expected. We’d jotted down so many ideas throughout the year, that when it came down to the meeting to decide we had so much to choose from!

What song holds the most meaning for you on the album and why?

For me it would have to be Wishing you were somehow here again, as its a song I’ve always sung growing up and is also from one of my favourite musicals! My second would have to be Angel, as this represents so much emotion and has so much light and shade to the track, it was really fun to cover.

For this record you’ve recorded some solos. Did you want to show your fans a different side to your talents?

Definitely! There are so many different parts to everyone’s voice and this can’t always be shown in our duets! So we really wanted to give everyone a taste of what it sounds like before we bring the music together.

Perhaps Love is your first release through Sony Classical. What was behind the decision to change labels?

It was a real natural move for us. It was mutually agreed that Sony Classical was probably more suited to us and the kind of music we wanted to record! And to be on such a prestigious classical label, is such an amazing opportunity for us!

Your first album Together was a Top 5 smash. Do you feel pressure to equal or better that success with Perhaps Love?

I think naturally we always want to better and improve our music, so if we can aim for higher this time it would be incredible! But I’m just thankful to be able to produce a record I’m so proud of.

How would you say that Britain’s Got Talent and the success of Together have changed your lives?

It’s flipped everything upside down! There has been so many experiences and life lessons that wouldn’t have been possible without any of this. It’s done so many amazing things for us and we have Britain’s Got Talent to thank for that.

When can your fans see you performing live over the coming months?

We have a lot of TV booked over he upcoming months in order to showcase the album! But if they head to our twitter page @JonCharOfficial any updates on gigs and events will appear there!

Hopefully we’ll be making some big announcements before Christmas! But for now our main focus is the album and making it a success!

Advertisement. Scroll to continue reading.
In this article:Charlotte Jaconelli, Jonathan and Charlotte