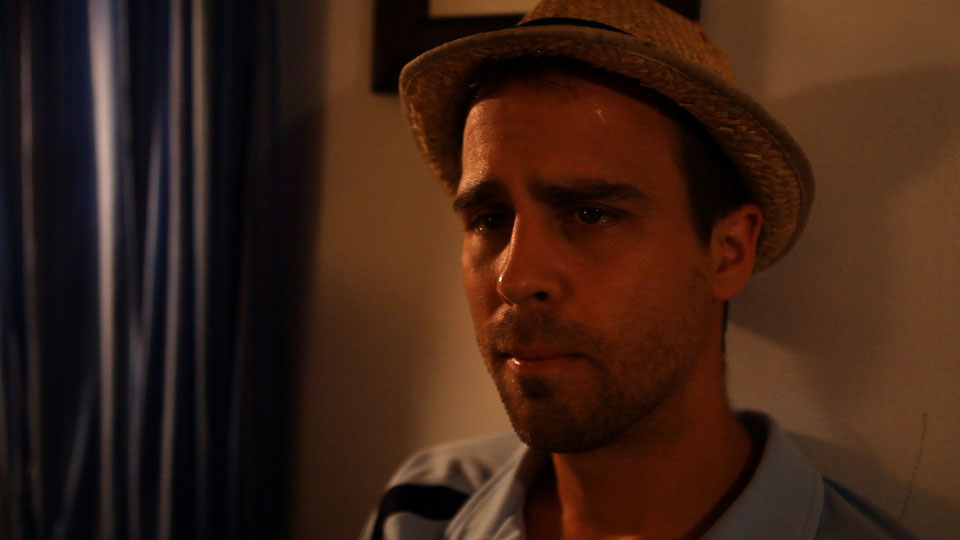 Turtle Hill, Brooklyn picked up a lot of buzz on the festival circuit over the past few months.

Written by and starring Brian W. Seibert and Ricardo Valdez. The film looks at the relationship between two men over the duration of a 30th birthday party.

We had a chat with Brian who plays Will to find out more about the film, talk about the inspiration for it and discuss that scene with the tiny swimming trunks.

How are you? Where does this email find you?

I’m great, thanks. This email finds me at my desk job. A necessity for being able to produce the independent films I do. (Hopefully not forever!) The great thing is it allows some flexibility and pays well in order for me to make more projects happen. (I actually just finished making some changes to the feature I’m writing. Don’t tell my boss!)

Turtle Hill, Brooklyn is out on DVD. Tell us a bit about the movie?

Turtle Hill, Brooklyn is essentially a love story about a couple trying to figure out themselves and their life together. It’s about confronting the secrets we keep from each other and from ourselves. It takes place in a day and it’s also really funny.

You co-wrote and produced, as well as star in the film. Where did the idea for the story come from?

We wanted to write a story about people we know and identify with. Too often we find that gay movies (and movies/TV in general) feature gay characters we don’t recognize. They can be super campy or addicted to drugs or super rich, which we’re not saying don’t exist (they do). We just wanted to write a story about gay characters that aren’t often seen in entertainment. The other characters are very real people to us as well, not the friends you see on Sex and the City or Friends or the standard sidekick-y best friends you see in film. We also had a lot of anecdotes and experiences from parties we’ve thrown that were a great way to start a structure for the film.

How does your writing partnership with Ricardo Valdez work? Give us a little insight into your process.

Ricardo and I worked really well together in both writing and producing this film. We kicked around ideas for a while and wrote everything down. Once the structure was solidified for the script, we wrote both separately and together to finalize it.

How did Ryan Gielen come to be involved with the movie?

I met Ryan 7 years ago when he hired me as an actor for a short. Since then we’ve become good friends and I’ve worked with him on other productions as both an actor and producer. This seemed like a great movie for Ryan’s sense of humour and the way he handles realism. Based on our small budget and tight timeframe, we knew he’d be able to take this on with style.

You sport some rather snug-fitting swimming trunks for one scene in the movie. Do you get nervous stripping off on screen?

Ha. No. On stage and screen, I’ve taken on some challenging tasks. When it makes sense in the script, nudity or intimacy with friends (or strangers) really doesn’t faze me anymore. It always helps to work with a director/crew/cast that is professional, supportive and up front about things.

You took Turtle Hill, Brooklyn to festivals and the film got a great reaction. How important is it to get recognition on the festival circuit?

For us, the festival circuit was super important. It introduced us to a lot of people we wouldn’t have otherwise met, from reviewers to distributors. It also helped build a fan base for when we released the movie.

What kind of reaction have you received from fans? Has social media made it easier to gather opinion on the film?

We’ve had a great response from fans all over the world; they love our film. Many people commented on how great it is to see such a variety of people on the screen, that it reminds them of something in their own lives, or makes them think after they’re done watching it. Social media has helped a lot! We’re able to track where the film resonates more and where we can target.

What is the one thing you want people to take away from Turtle Hill, Brooklyn once they’ve seen it?

That’s a toughie. To us, the movie is about relationships and communication, so we’d want the audience to see what happens when communication shuts down. Also, relationships, whether gay or straight, don’t differ that much. Everyone goes has similar problems. That was a great response from festivals as well; all people saw issues they deal with in their own lives or relationships.

Ricardo is writing two features at the moment on his own. I’m writing a feature with another friend that we plan to shoot mid-next year. Together, we have a couple ideas we’re toying with at the moment, but nothing is on the page yet.

Turtle Hill, Brooklyn is available on DVD in the US now.