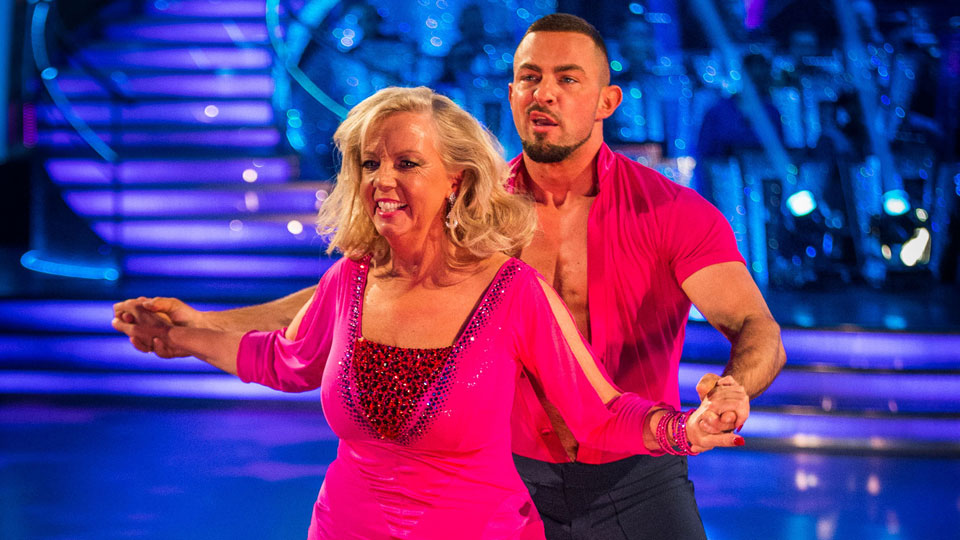 After last week’s live show we were left in awe at Sophie Ellis-Bextor, cheering on the entertainment force that is Dave Myers and trying to guess who will lift that glitterball trophy. Of course we were pleased to see Deborah Meaden score a respectable 24 for her cha cha and it seems her partnership with Robin Windsor is one that is working perfectly.

In our weekly catch-up with Robin we discuss last week’s cha cha, talk this week’s quickstep and find out who he thinks is the dark horse of the competition.

For week 2 you and Deborah danced the cha cha. How do you feel it went?

Last week Deborah and I had an absolutely incredible time dancing at the Strictly ballroom. We were very proud of our cha cha cha and of course we got to see a side of Deborah that nobody’s seen before. Deborah had attitude and was being a diva in front of the judges. I think it was a nice surprise for everybody to see her actually being pretty cool.

The judges praised Deborah saying she had improved from week 1 so we were a bit disappointed when they scored her at 24 for the second week running. Were you expecting a higher score based on their comments?

I think after week 1 everyone was shocked at how good she could actually dance so I think that’s where the scores came from. I thought she was better this week and had a lot more confidence. The scores are based on the dances each week rather than compared week-on-week.

Overall then you were happy with Deborah’s performance in week 2?

I couldn’t have asked any more of Deborah in week 2. She had this amazing confidence and I’m hoping she’s going to bring that into the dance this week so we can get an even higher score.

This week you’ll be dancing the quickstep. How’s Deborah getting to grips with the routine?

Deborah has found that the quickstep is quick and has lots of steps (laughs) which is kind of as it says on the tin. We’re running around the rehearsal room like crazy. I’ve once again choreographed a difficult routine for her but she’s absolutely loving it. Deborah works really well with a lot more choreography and fast steps than she does with slow steps.

You mentioned last week that Deborah is more a Latin girl than ballroom. Is the quickstep landing somewhere in the middle?

The quickstep is a dance that’s sitting really well on Deborah. All we’ve got to concentrate on is her topline. If she can manage a good topline we’ll have a fantastic night.

Have you found any areas with the routine where she’s struggling or is she battling through with her determination and long training sessions?

As usual Deborah is working really hard. We started this morning at 8am and we’ll finish tonight at 10pm. We’ve been doing very long days and I just hope that on Saturday night it all pays off.

Each week Deborah has got more and more excited about the show because every dance we’ve done she’s liked more than the week before. If it keeps going like that then she’s going to do very well. The more she loves the dance, the better she dances it.

Last year you had a great laugh with Lisa Riley as well as training really hard. It looks like you’re having a similar experience with Deborah. Are you forming quite a close friendship now?

This week on Strictly it’s love week and I’ve welcomed Deborah into my world which is ballroom dancing. It’s also now the love of hers. She’s absolutely loving it and we get on so well together. We’ve formed such a great relationship and we have a great laugh.

Let’s talk about some of the other celebrities. Last week Sophie Ellis-Bextor really pulled it out of the bag with that stunning Charleston which was amazing for a week 2 dance. Does it put more pressure on you watching dances of that standard this early on in the competition?

Sophie Ellis-Bextor’s Charleston last week was one of a kind. She was made to do the Charleston or let’s say the Charleston was made just for Sophie. She had everything that could possibly be needed in the Charleston and of course she’s very quirky, she has the right look and she looked like she belonged in the 1920s. I have to say that it’s the best Charleston I’ve ever seen on Strictly.

It was pretty breath-taking to watch it at home and we were thinking what on earth is she going to do next week?

We’ve seen the couples dance twice now. Who do you think is the dark horse of the competition?

I think there’s quite a few. I don’t want to be biased and I say this honestly, but I think that Deborah could be the dark horse of the competition. She’s going to start improving week-upon-week and the audience love to see the journey of somebody that’s improving. That’s what the show’s all about and I have a feeling that Deborah could do really well in this competition.

Are you hoping to get as far as last year, if not further?

Of course my sights are always on that glitterball but we have to take it week-upon-week. It’s a long road ahead but I’ve got the most hard-working dancer in the entire world in Deborah so that is possibly within our sights.

Why should people pick up the phone and vote for you and Deborah this weekend?

People should pick up the phone and vote for us this weekend because Deborah is the most unique person to be working with. I’ve never known somebody have such hard work and dedication to something. She absolutely loves it and she’s getting better. After this weekend I won’t have to ask people to pick up the phone, I think that they just will.