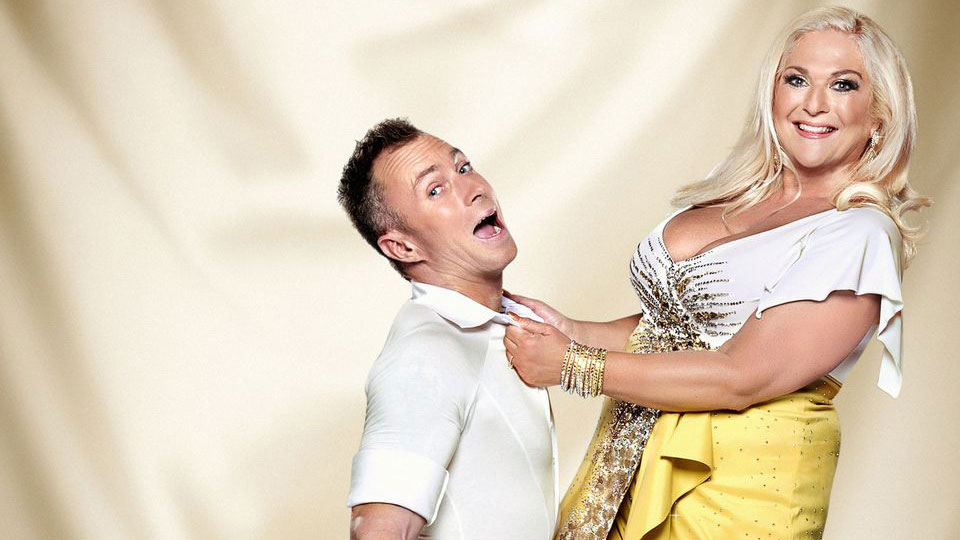 Can you believe that we’re already three weeks into the 2013 series of Strictly Come Dancing? We don’t know where the time is going, we really don’t. Last weekend Tony Jacklin and Aliona Vilani became the first couple to leave the competition.

On tonight’s show the 14 couples took to the dancefloor once again and the theme for the week was Love. Surely that meant lots of flesh on display, lingering glances, romantic music and sensual dance moves?

The show kicked off with a wedding themed dance from the Strictly professionals which saw Ola Jordan and James Jordan get married with Craig Revel Horwood acting as the vicar. The routine ended with Craig getting cake in his face.

Bruce was back this week after being ill last weekend.

Model Abbey Clancy opened the show tonight with her partner Aljaz Skorjanec. In her VT Abbey said she was nervous last week and admitted she hadn’t done her best. She said she thought the judges had been generous with her points. Over the past week Abbey took Aljaz to her hometown of Liverpool as they prepared for Love week. Tonight Abbey and Aljaz danced the Jive but could Abbey keep her nerves in check?

The audience were on their feet giving their first standing ovation of the evening. Len said overall Abbey’s energy and enthusiasm was great but told her that her technique needs working on. Bruno called her ‘groovy Abbey’ and complimented her on her pout but agreed with Len that the technique could be a bit sharper. Craig said he didn’t like that Abbey and Aljaz were sat down for the first part of the routine and criticised her attack saying it was lacking. Darcey said the ‘energy, story and style was lovely’.

Abbey and Aljaz scored 28 out of 40 from the judges.

Casualty’s Patrick Robinson was next to dance with his partner Anya Garnis. Last week the couple had a great week with the judges lavishing praise on their performance. For Love week Patrick and Anya were dancing the Foxtrot and Patrick revealed that the choreography is beautiful. Did they win the judges over once again?

Patrick and Anya scored 27 out of 40 from the judges.

Hairy Biker Dave Myers has become the celebrity we can’t wait to see dance every week. Last week’s American Smooth Foxtrot wasn’t warmly received by the judges but the audience loved it. This week Dave and Karen danced the Paso Doble and in training Karen told Dave he needed to find his passion. Was it another show-stopping performance?

The audience absolutely loved the performance jumping to their feet for a standing ovation. Craig looked very unimpressed with Dave saying he looked like ‘a bulldog eating pickles’. All he said was ‘dreadful’. Darcey said Dave had a strong attitude but told him to tuck his bum under a bit more. Len said it was like being whacked and called Dave the people’s champion. Bruno said the performance topped everything he’s ever seen and labelled the dance ‘beyond description’.

Dave and Karen scored 16 out of 40 from the judges.

Actress Fiona Fullerton messed up her routine last week and the judges told her she couldn’t keep messing up. Over the course of the week it was Fiona’s birthday and Anton Du Beke arranged a surprise visit from her husband to lift her spirits. Tonight for Love week Fiona and Anton danced a Waltz. Did Fiona manage to get through the routine without any mistakes?

Darcey said that Fiona has turned into Grace Kelly but advised her to open her shoulders to improve her positioning. Len said Fiona is playing snakes and ladders and told her she was up the ladder this week. Bruno said it was ‘nice and classy’ and told her her technique was much better. Craig said the dance was ‘extremely elegant and beautifully danced’.

Fiona and Anton scored 28 out of 40 from the judges.

Countdown’s Rachel Riley was next to dance tonight and last week she failed to impress with her salsa. She admitted that she knew she wasn’t going to be great at the salsa and said some of the judges’ comments were a bit harsh. Training looked a bit messy but did Rachel and her partner Pasha Kovalev impress with their cha cha?

Rachel and Pasha scored 27 out of 40 from the judges.

Actor Mark Benton was one of our favourites last week and his partnership with Iveta Lukosiute is superb. During the week Mark got the chance to spend some time with his kids and his wife who have been really supportive of his Strictly performances. Tonight Mark and Iveta danced the American Smooth.

Bruno said that Mark can really tell a story and told him he played it beautifully. Craig agreed with Bruno but told Mark he needs to work on his hands as they are ruining his performances. Darcey said she missed the glamour and flare of the American Smooth and told him he dances a bit small for a tall man. Len said that Mark captures the essence of every dance and ‘gets it’.

Mark and Iveta scored 26 out of 40 from the judges.

Rugby hunk Ben Cohen was the next celebrity to dance tonight. With his partner Kristina Rihanoff, Ben has been struggling with nerves and admitted he needs to relax. Like the other celebrities he spent some time at home with his family as he prepared for Love week. Tonight he danced the Rumba.

Ben and Kristina scored 28 out of 40 from the judges.

With seven couples still to dance, the show reached its halfway point. The next celebrity on the dancefloor tonight was Sophie Ellis-Bextor. Last week Sophie and her partner Brendan Cole wowed everyone with their remarkable Charleston. Sophie’s husband Richard (from The Feeling) visited her during training. Tonight Sophie danced the Samba but did she top last week’s performance?

Darcey said Sophie’s dance content was fabulous but said she wanted to see her being a little more wild and free. Len said it lacked a bit of toning in places but said he thought it was lovely. Bruno said it was a sophisticated Samba and commented that she did it ‘without breaking a sweat’. Craig said he enjoyed it and told her ‘well done’.

Sophie and Brendan scored 31 out of 40 from the judges.

Last week fashion designer Julien Macdonald found himself in the dance off but survived to dance another week. In his VT he admitted that was glad to get through to this week and he brought his dog into the training studio. Janette Manrara said that Julien needs to get more of a spring in his step ready for his Jive. Did he fare better than last week?

Len said he really enjoyed the routine and Julien’s ‘devil may care attitude’ before telling him it was his best dance yet. Bruno said he enjoyed it too but told Julien he needs to really work on his timing. Craig said the energy was great before comparing him to a ‘3 year old’. Darcey told Julien to point his feet to make the kicks and flicks more polished.

Julien and Janette scored 22 out of 40 from the judges.

Susanna Reid and Kevin Clifton were next to dance tonight and they’ve been one of the strongest couples in the series so far. Their Tango impressed the judges and this week they danced the Viennese Waltz. In training Susanna was working hard to improve her glide and struggled with the confines of the rehearsal room. Was it another hit for Susanna and Kevin tonight?

Bruno said that Susanna had a feel for the dance and commented that she’s comfortable with ballroom and Latin. Craig criticised Susanna’s left shoulder but didn’t say much of anything else. Darcey said the technique is good but advised Susanna to use her shoulders to get more stretch. Len said he was in love with Susanna’s Viennese Waltz labelling it the best dance of the night.

Susanna and Kevin scored 34 out of 40 from the judges.

Next up was Vanessa Feltz with her partner James Jordan. After a disappointing week 1, Vanessa impressed the judges last week by upping her game. This week she was dancing the Tango and in training she revealed that she was finding it hard to move as fast as she needed to. Did she get another warm reception from the judges?

Craig said the dance lacked a bit of sharpness and gave her lots of critique. Vanessa answered back of course. Darcey said Vanessa had lots of attack but told her that her head position was letting her down. Len said there was lots of content in the routine but said it was lacking something. Bruno said Vanessa’s attitude was good but told her she needs to drive through the routine more.

Vanessa and James scored 22 out of 40 from the judges.

Hollyoaks star Ashley Taylor Dawson took to the floor next with his partner Ola Jordan. After last week’s hectic schedule which saw Ashley becoming a father again and keeping up with his training, Ashley was focused back on the dancing again this week. Dancing the Samba, Ashley didn’t seem to be particularly loving the routine. Did he pull off a great Samba?

Yet another standing ovation from the audience for Ashley and Ola. Darcey said she liked the routine and complimented his performance. Len said Ashley coped very well with a difficult dance. Bruno propositioned Ashley but told him he did a great job. Craig said Ashley’s hip rolls were ‘absolute filth’ but admitted he loved them.

Ashley and Ola scored 31 out of 40 from the judges.

The penultimate couple to dance tonight was Natalie Gumede and Artem Chigvintsev with their Rumba. Each week Natalie has performed to a very high standard and she’s one of the best dancers in the competition. In the VT Artem attended a girlie night at Natalie’s where they were both decked out in onesies. Did their Rumba get us feeling all smoochy?

Len said Natalie was ‘fabulous’. Bruno said ‘expressive, beauty in perpetual motion’ whilst Craig simply said ‘love, love, love’. Darcey said that Natalie speaks with her body and told her she was brilliant.

Natalie and Artem scored 36 out of 40 from the judges.

The last couple to dance tonight was Dragon’s Den star Deborah Meaden with her partner Robin Windsor. For the past two weeks the couple have scored 24 so could their quickstep finally given them a higher score? Craig criticised Deborah for being a bit stompy last week and she admitted that she could do better. How did Deborah get on with her quickstep?

Bruno said ‘the dragon is turning into a butterfly’ and said she was much better again this week. Craig said Deborah put a smile on his face and he enjoyed the routine. Darcey said she loved the pleasure that Deborah gets from dancing. Len said it was Deborah’s best dance so far.

Deborah and Robin scored 28 out of 40 from the judges.

Tune into Strictly Come Dancing tomorrow night at 7.20pm on BBC One and BBC One HD to find out which couple will be leaving the dancefloor. Check out our gallery of images from today’s rehearsal: