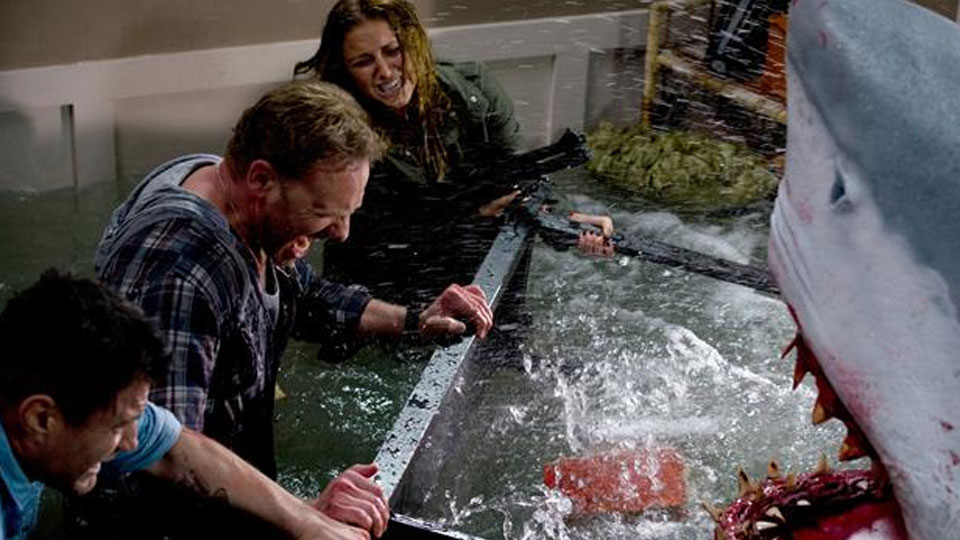 Bar-owner Fin (Ian Ziering) embarks on a rescue mission with his friends Baz (Jaason Simmons) and Nova (Cassie Scerbo) when his estranged wife April (Tara Reid) and daughter Claudia (Aubrey Peeples) are stranded following a freak tornado. Not only having to brave the elements, Fin and his friends have to watch out for killer sharks that were picked up in a tornado and scattered across Los Angeles endangering the lives of everyone in the city.

Sharknado was a Syfy original movie that really captured the attention of viewers and celebrities when it first aired earlier this year in the US. The night of its premiere it trended on Twitter and was the most-talked about programme of the evening. Despite being pretty much critically-panned, the B-movie tongue-in-cheek made for TV movie pulled in impressive ratings and talks of a sequel were confirmed within days.

Sometimes B-movies such as this are so bad they become a guilty pleasure with the audience and that certainly seems to have been the case with Sharknado. The movie is set in an unrealistic world with characters behaving so stupidly, and layering the cheese on thick, that you can’t help but laugh at it. Logic tells you that a tornado is very unlikely to spread killer sharks around a city and the way the characters react is equally unlikely.

Part of the joy of Sharknado is the sheer ridiculousness of it all and it certainly takes silly to a whole new level. Most of the movie defies logic with characters surviving being swallowed by a shark (despite said shark being not much bigger than the person its swallowed), pun-tastic lines being uttered left, right and centre, and characters wielding chainsaws to slice sharks in half. Even as we type this we wonder if we actually dreamt up the whole thing.

The acting in the movie is as iffy as the plot but that’s no surprise as the cast is made up of faded TV and film stars. Beverly Hills 90210 star Ian Ziering leads the charge as Fin and actually he’s one of the best in the movie. Even more remarkable now he’s a stripper, rather than an actor, in real life. Former Baywatch hunk Jaason Simmons is almost unrecognisable as Fin’s best-friend Baz. Gone are his long blonde locks and in their place a rough, grizzled looking man. Tara Reid’s acting abilities extend to looking as if she’s battling constipation for the whole movie. She has the emotional range of a block of wood and it’s such a shame because she once showed such promise.

Special features on the release include a behind-the-scenes featurette, gag reel and trailer.

Sharknado is never going to win any awards and it’s never going to be deemed a classic. It will likely go one to be one of those guilty-pleasure films where audiences sit and scream at their TV. We were almost hoarse by the end of it as we got so involved with the stupidity of it all. With Sharknado: The Second One (we kid you not) on the way in 2014, it looks like Syfy are going to get their mileage out of this franchise whilst the buzz is still high.