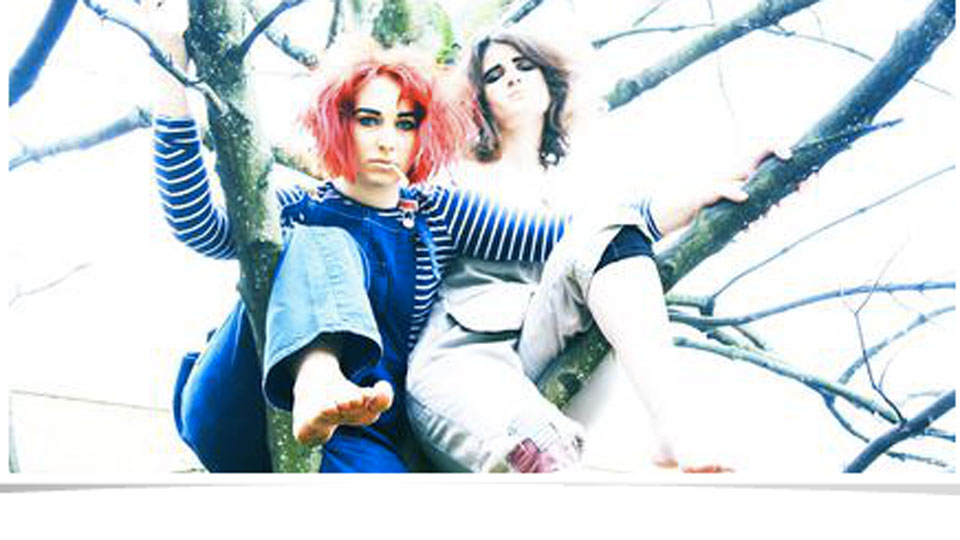 Originally developed in 2012 at West Yorkshire Playhouse before premiering in Edinburgh, The Ugly Sisters now returns to Leeds as part of a national tour. Conceived by the innovative RashDash collective, the show is a dark satiric musical retelling the true story of Cinderella and her ugly sisters, with a modern message.

Presented in the form of a shabby gig, with amps and instruments scattered around a simple performance space, The Ugly Sisters is a production which recounts the destruction of two girls at the hands of exploitative entertainment. Qualifying for a place in a televised competition to win the heart of the Prince, sisters Emerald and Pearl compete against step-sister ‘Cinderella’ and seem to be on the verge of winning. But what is the ultimate cost of the fortune, fame and prize?

Emerald and Pearl are played by Abbi Greenland and Helen Goalen respectively. The characters are presented in a punky, urban gothic style. With matted hair, shabby clothes and a despairing, wan appearance, they are quickly identified as the victims in this tale. Greenland is hilarious as the dominant sister, giving a bravura performance whilst thumping drums and threatening the audience. Goalen’s Pearl is the more sympathetic sister of the two, with an impish quality which is both endearing and perfectly balanced against her sister’s bullishness. It is an ideal pairing and there is a genuine feeling that Greenland and Goalen really are sisters in the way their mannerisms are mirrored, particularly during interludes of dance where they are locked together in playful choreography. Their continually unhinged personas also add a frisson of anxiety to the show, as on several occasions they curse the audience and threaten to humiliate them; all darkly funny and a playful nod towards the show’s pantomime origins.

The sisters are backed by Not Now Bernard, an eclectic band featuring Benny Brooke, Jonas Aaron and Tom Penn. Brook, often on bass, doubles as the sisters’ mother Ruby in a gently aloof and understated performance. Aaron on guitar/violin provides a brattish personification of Cinderella whilst Penn, when not delivering a forceful drum score, is a delightfully modern hipster version of the Prince. The band’s occasional presence as outside characters give the show an impromptu quality and sense of child-like unpredictability.

Musically the show is punctuated by diverse numbers, ranging from punkrock to pseudo-opera. Many of the songs reflect the punky, stripped-down design of the set, with aggressive lyrics and physically threatening performances. Equally superb underscoring comes from classical string instruments, lending the drama increased pathos and a rich filmic quality.  A particular song, performed using a loop pedal, is incredibly effective in making both an impassioned, dramatic plea, whilst also underpinning an on-going gag. Like much of this show, it is a fine example of progressive music and innovative theatre combined.

The Ugly Sisters is a show about reputation and exploitation. Audiences will enjoy re-evaluating the role of the sisters within the classical Cinderella tale, but importantly, may be surprised at the suffering the characters submit to in order to gain public affection. Vividly attacking the media and how it creates celebrities to ultimately humiliate and publicly destroy, the show sends a clear message about the dangerously insatiable appetite modern audiences have for people to suffer, particularly those perceived as stupid or ugly. It is no different from the spectacle of the gladiatorial ring; ultimately pleasing voyeurs in the cosy relief that they’re not in the position of humiliation or desperation.

With a simplistic, compact set and gig-style lighting, The Ugly Sisters is produced very much in the fringe tradition. Ideas and themes are densely packed; there is a youthful angst to the writing, a playfulness which is prescient and damning to the current trend of ‘reality’ entertainment. Arresting, sometimes uneasy and often anarchically funny, The Ugly Sisters is an abstract triumph of cabaret theatre. Fast, furious and aggressively to the point, it will enlighten, surprise and shock when you least expect it.

Advertisement. Scroll to continue reading.
In this article:West Yorkshire Playhouse