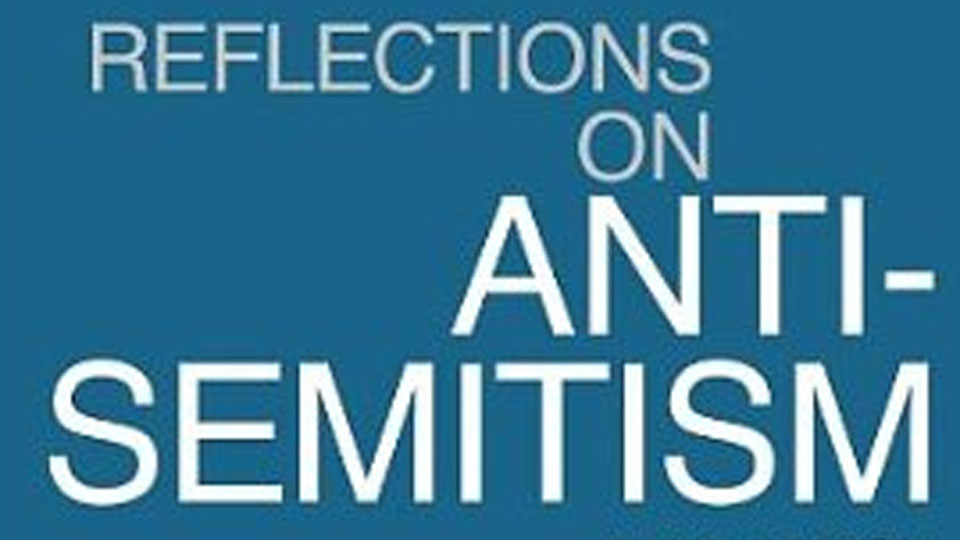 The delicate subject matter of the ugly reality of cultural anti-Semitism is dissected by Alain Badiou, Eric Hazan and Ivan Segré in this new book. Badiou is a professor of philosophy at the European Graduate School, and he has previously raised hackles for his essay on uses of the word ‘Jew’.

Reflections on Anti-Semitism is a book that soberly and dispassionately examines the alleged increase in anti-Semitism in French society. The authors look at individual claims that anti-Semitic incidents and sentiments have increased in France.

The specific focus on French society may limit the scope of the book’s appeal, though international ramifications are considered. This edition is an English translation (by David Fernbach), which for the most part reads clearly, save for one or two confusing word choices.

The thrust of the authors’ argument is to dissociate general anti-Semitism from anti-Israeli policies and anti-Zionist convictions, specifically in relation to Israel’s neighbouring Palestinians. It’s their contention that debate about the state of Israel is stifled by false accusations of western anti-Semitism.

The chapter On Ethno-Cultural Sociology (by Ivan Segré) is taken up with examining the claims of a few schoolteachers that incidents of anti-Semitism had arisen within the classrooms from a specifically Muslim origin (or to use Segré’s favoured word, Maghrebian – denoting the background of many French Muslims). Many pages are spent analysing these claims and finding them wanting in various respects. However, it should be questioned as to the extent to which a school environment is a microcosm of society at large, and that’s an angle Segré doesn’t pursue. His thesis reads in places as a defence of Muslims against accusations of anti-Semitism – in itself not unworthy of examination: but Segré doesn’t deny that anti-Semitic sentiments remain present in society but spends less time discussing that problem than demolishing anecdotal evidence. For example, the author’s views on the alliance between America and Israel could usefully have been expounded upon.

The next section of the book is a deconstruction of Pierre-André Taguieff’s La Nouvelle judéophobie (the chapter heading ‘Anti-Taguieff’ gives some indication of Segré’s opinion of the validity of his work) in which he challenges specific sections of Taguieff’s lengthy treatise. He concludes with a valid dismissal of Taguieff’s claim that the Catholic Church had established an incompatibility between anti-Semitism and the Christian faith by the 1930s – pointing out the awkward truth of Pope Pius XII’s inaction over the rounding up of Roman Jews during WWII.

He follows this chapter with a similar analysis of Oriana Fallaci’s writings on anti-Semitism, in which he argues that she conflates Nazism with Islam. He soberly analyses the difference between Nazi concentration camps and extermination camps.

Reflections on Anti-Semitism isn’t a light read (though showing his lighter side, Segré ends on a joke), but should be viewed as a useful academic tome on the subject for students of the social sciences. The authors’ language is analytical rather than lyrical, and the subjects are covered with an eye for detail rather than drama. However much the literary style may alienate casual readers, the density of material will prove insightful and useful to anyone pursuing a rigorous approach to researching the subject.

The book certainly isn’t the last word on the topic of anti-Semitic sentiment and rhetoric in the West, or even in France, but it will succeed at least in promoting debate about the nature of it in societies, the reasons for it; and the need to examine the foreign policies of Israel without the unreasoned influences of race and religion and without reference to Jewish tradition. There will be strong feelings about the subject matter, but the best thing is for every reader to examine it and decide for themselves how accurate the authors’ assessments are on the contemporary situation.

Greg Jamesonhttp://www.gregoryjameson.com
Book editor, with an interest in cult TV.
Previous article
An Evening with Roger Moore at Leeds Grand Theatre
Next article
I’m With The Band