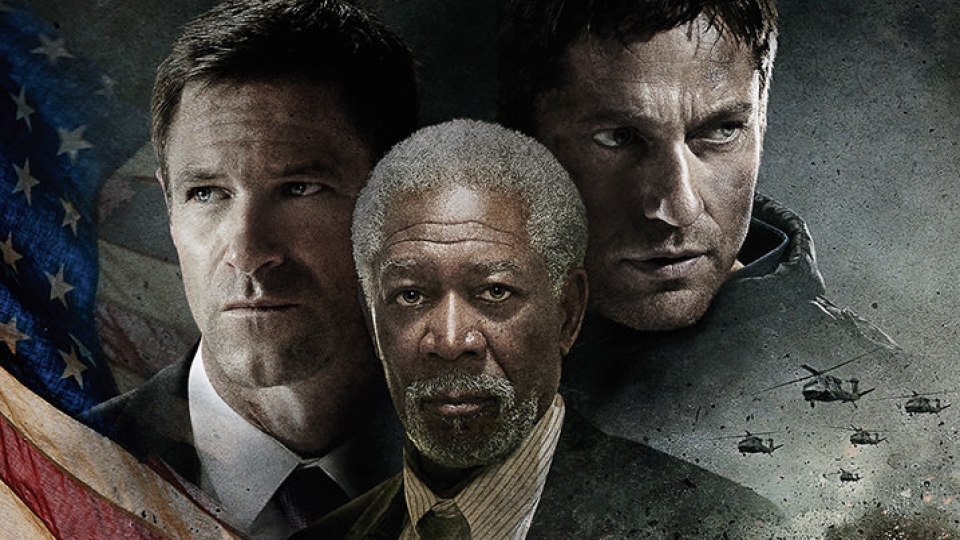 When the White House is taken over by North Korean terrorists, it’s left to former Presidential Guard Mike Banning (Gerard Butler – 300) to save the day. He must navigate the White House and try and rescue the President’s son first, before terrorist leader Kang (Rick Yune – Die Another Day) can use him as leverage against the captured US President Benjamin Asher (Aaron Eckhart – The Dark Knight). With time ticking and the threat of a nuclear attack rising, Banning must use of all of his skills to infiltrate the most heavily guarded building on the planet.

Your enjoyment of Olympus Has Fallen will depend entirely on how you approach this blockbuster actioner. First off, leave all logic at the door as you won’t need it here. Olympus Has Fallen is not for everyone so cynics need not apply. If, on the other hand, you want an action-adventure that’s made in the same mould as Die Hard and The Rock, this is most definitely for you.

It’s an unrelenting assault on your senses from start to finish that leaves you thumping your chest and wanting to shoot some bad guys. The film mixes key elements of the action genre to create an onslaught of set-pieces that top each other for scale and audacity.

As mentioned before, logic plays a small role in this film. If you can overcome a few absurdities then you’ll enjoy the ride a hell of a lot more. Why would it take the Army 15 minutes to get to an under-fire White House? How could such a massive armed aeroplane even make it to the eastern seaboard without being shot down first – let alone into the middle of restricted, Washington DC airspace? Why do American secret service men frequently run into random gunfire rather than mount a strategic attack? This is a film that requires frequent leaps of faith but the end product is so popcorn-friendly, you’ll easily forgive it.

Olympus Has Fallen provides suspense, action, adventure and breathtaking spectacle in every frame. This is a big budget blockbuster that puts every penny onscreen in some amazing set-pieces. The attack on the White House and the surrounding Washing DC area is superb, the opening sequence at Camp David is suspenseful and tragic and the finale (involving a series of helicopters being mowed down by a Hydra gun) is awesome.

A film as big as this requires some strong characters to hone in all of the carnage. Gerard Butler, Aaron Eckhart and Morgan Freeman dutifully oblige. Butler, who coincidentally produces this film too, hands in a very strong leading turn as the lone operative tasked with saving the world. Butler has frequently been the best thing in all of his movies but Olympus Has Fallen finally gives him a leading action role worthy of his talents.

Aaron Eckhart plays a very convincing President whilst Morgan Freeman frequently steals his scenes as the Speaker of the House who is tasked with leading the country in its darkest hour. Elsewhere there are good supporting turns from Ashley Judd, Melissa Leo, Angela Bassett, Radha Mitchell, Cole Hauser and go-to bad guy Rick Yune.

10 reasons why Bumblebee is the best live-action Transformers movie