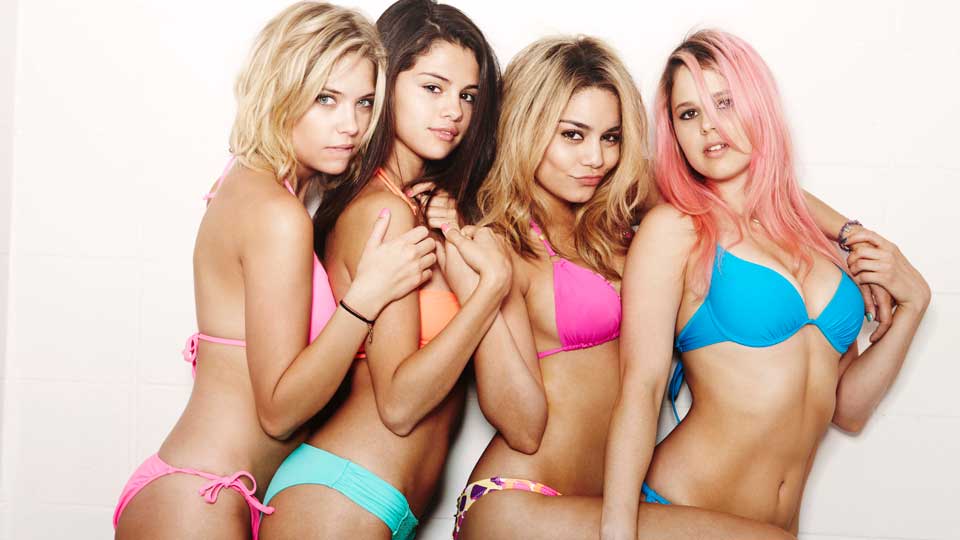 Four college girls yearn for a holiday and decide to rob a local restaurant in order to fund their spring break vacation. After a few days of heavy partying they find themselves in jail until a local drug lord named Alien (James Franco – Oz: The Great & Powerful) bails them out. Seeing these girls as his soul mates, Alien goes about introducing them to a life of danger and money but this slowly unsettles the group and leads to potentially volatile situations.

Spring Breakers is a curious film written and directed by Kids and Gummo scribe Harmony Korine. The first 30mins will constantly have you clock-watching – it’s an arduous opening that has more in common with Project X or a beach dance-off reality show from MTV. Whilst it correctly sets the tone of film based around a group of drunken college kids, it also shoves the message down your throat. We get the idea loud and clear in the first 10mins, it really didn’t need constant repetition of how care and consequence-free these American teens are.

Once this settles down it becomes a lot more enjoyable but Spring Breakers is a film so intent on being non-linear that it ends up grating at times. With constant reused shots and looped snippets of dialogue not providing the dreamscape qualities it’s trying to establish, you end up losing patience with the film. The set-up is familiar and the implementation jumps from overzealous to masterful. But then a character is introduced that brings this all together and the end result is a film that frustrates but also provides a lot of laughs, some shocking sequences and a eclectic style that will define it as a cult classic.

Whilst this isn’t a Hollywood drama that requires its audience to attach themselves to a ‘good guy’ per se, Spring Breakers still seems to go out of its way to make each of its leading ladies annoying as hell. And as a result you don’t feel any sympathy or attachment to any of them or their situation. This affects the end of the film more, especially when their precarious predicament surrounds them. You only ever end up backing one character in the movie.

The girls all hand in strong and brave performances with Pretty Little Liars’ Ashley Benson leading the line well. Harmony’s wife Rachel Korine has the most to do amongst the girls and sells a lot of the anarchy and debauchery with a strong and vibrant performance whilst former High School Musical sweetheart Vanessa Hudgens does all she can to redesign her image. As a drug-taking, violence loving bitch that has few morals and even less inhibitions, Hudgens does well but there’s an element of her performance that feels like it’s just trying to shock for the sake of it.

Selena Gomez is perhaps the most surprising addition to the cast and whilst she comprehensively sheds her Disney Channel persona, it’s not as brave a role as early reports would suggest. She does well here but the story makes sure that Gomez is the only girl with an ounce of common sense and as a result, she makes a hasty exit from the movie.

So far so uneventful then… until James Franco steps into the mix. I have never seen a performance shift the entire tone of a film as comprehensively as James Franco does in Spring Breakers. He saves this from being an MTV reality show into a dark and exuberant tale of money, drugs, fame and love. Franco hands in a truly breathtaking performance that’s full of memorable dialogue and big moments that will stay with you. His ode to material possessions aka the ‘look at all my shit’ scene is perhaps the best five minutes of cinema you will see this year. Follow that up with a dynamite performance of the Britney Spears classic ‘Everytime’ (complete with balaclava-wearing, gun-toting, bikini-clad girls dancing around a piano) and you have two of the Spring Breakers greatest moments. And Franco is at the centre of them both.

But it’s more than just a big performance with loud, catchy sound bites. It’s a remarkably well written character, full of bravado and angst, which makes Korine’s movie tick. Franco gives the film a depth that’s impossible to look away from and by doing so, gives Spring Breakers a story you can finally get invested in.

It’s also worth mentioning that Spring Breakers has one of the best and most striking promo campaigns going. The day-glo posters coupled with the promo shots of the bikini-clad girls, the bling of Franco and the stylistic feel of the soundtrack beautifully ties this all together and makes Spring Breakers a visual treat that’s hard to top for sheer audacity and approach. Mix this with moments of pure joy from Harmony Korine that echoes a stylistic approach influenced by the likes of Michael Mann and Nicolas Winding Refn and you have a film with strong, bold imagery throughout.

Spring Breakers is ultimately a middle of the road movie with touches of true class behind the camera and a 5 star virtuoso performance from Franco. It won’t win any awards (although Franco should) but Spring Breakers is still destined to become a postcard for a generation – a cult classic that I’m sure will appreciate with time. For now, it’s worth the admission price alone just to witness James Franco’s supreme performance.