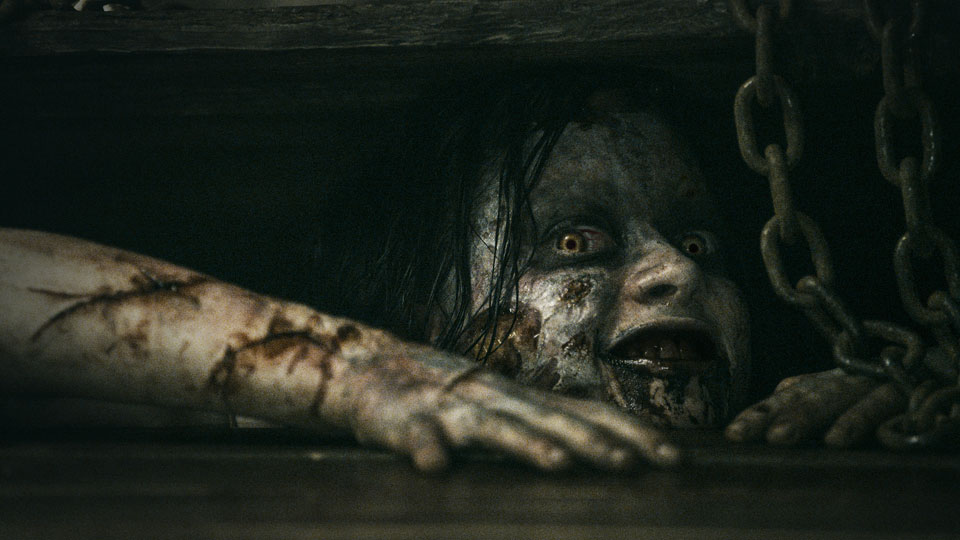 Five twenty-something friends decide to take a vacation to a remote cabin, and to also help one of the group kick her drug habit. When they discover a Book Of The Dead they summon up demons that are living in the woods surrounding the cabin. The group have to now fight for survival before the evil slowly possesses them all.

Fede Alvarez has taken on the challenge of re-imagining one of the true horror video nasties of all time. Sam Raimi’s original film was the true aesthetic of low budget film making that made it big thanks to being released during the 1980’s video nasty debate, when horror films were being pulled from video shops weekly.

So there is a lot to live up to when you remake such a film – others over the recent years have tried and failed quite badly, yet with Sam Raimi, Robert G. Tappert and Bruce Campbell on board as executive producers it means that it has to be done correctly otherwise it’s the original creators names at stake as well.

Evil Dead 2013 is very much a challenge on the senses. It has a real look and feel of being a dirty and grimy horror. Plenty of greys and deep reds are involved. The colour red is especially prevalent in the final twenty minutes where the film goes all out crazy with gore and blood. This is possibly the best part of the film for horror fans, as it’s unrelenting and completely full of tension as to what will happen next. The chainsaw comes in very handy against a couple of possessed “friends” too and shows us that Alvarez is capable of throwing everything on screen and delivering on the evil side of things.

However, what let’s down Evil Dead is the initial storyline as to why the friends are at the cabin. At first it’s because they all want a holiday together and it’s a cheap option to go to a family’s cabin free of charge, but then a sub plot of drug addiction seems to have been thrown in with no real idea where to go with this. It gets mentioned several times in the first thirty minutes and then once the blood starts to run it completely gets pushed aside and is forgotten about.

Also the five friends are the typical bands of people you would see in a horror film; we don’t root for any of them to survive as none of them are interesting and we’d rather seem them get the chainsaw. The group are so bland they could all have been interchangeable in any of the roles.

Evil Dead certainly has some interesting takes on the original version, and there is plenty of blood in the final third of the film. But ultimately it is completely hampered by the initial set up with the character-less friends who have no redeeming features. It’s a decent effort at a re-imagining yet it all seems kind of “what’s the point” by the end.

Advertisement. Scroll to continue reading.
In this article:Evil Dead