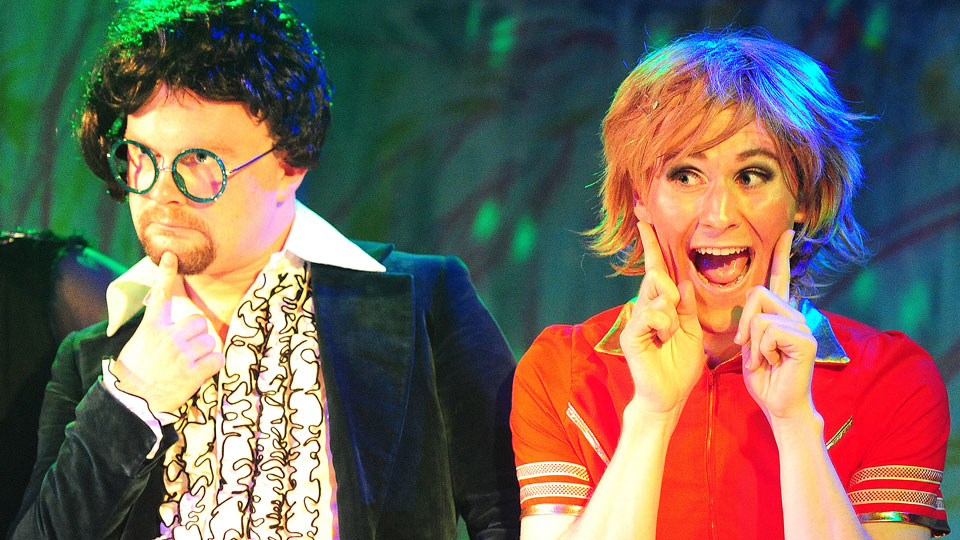 Brash, bawdy and utterly bonkers, Saucy Jack and the Space Vixens crashes into the West End offering glitter, sequins and plenty of cheese. The cult musical, now 18 years young, is essentially a load of nonsense about the ‘power of disco’ but is so exuberant in its relentless chaotic charm that it’s difficult not to be swept away.

The intimate lounge of the Leicester Square Theatre is transformed (on a budget) into the seedy cabaret club Saucy Jack’s, on the planet Frottage III. We meet a bunch of outcasts who are being picked off, one-by-one, by the Slingback Killer who leaves a signature sequinned heel in each of his/her victims. So far, so camp. The trio of Space Vixens are soon introduced to uncover the murderous mystery, while adding some glamour and sass.

The show is essentially about as kitsch as musical theatre gets – the only reason it works is because the game cast throw themselves into proceedings headfirst. With tongues firmly in cheeks, every member of the company cranks the campery up to maximum, making it impossible not to won over by the knowingly cheesy action. The base humour is evident from the outset – and with character names such as Chesty Prospects, Dr Von Whackoff and Bunny Lingus you should know what you’re in for! Endless innuendos (which do wear a bit thin) abound at every opportunity.

The strong cast has no real weak link, with all of them showing real commitment to the insanity on stage. Ralph Bogard chews the scenery, in the best way possible, as the titular Jack and really stretches his vocals chords on a few ultra-dramatic numbers. He is well-matched by leggy Jamie Birkett as his love interest, Jubilee Climax. Birkett has a beautiful, soaring voice and commands the stage as only a Space Vixen could. Mention must go to the comical Marcus Reeves and Hairspray’s Leanne Jones who is in fine voice.

The show isn’t without its faults – the sound mix is often poor with the performers getting a raw deal from the bombastic handheld mics which remove any trace of warmth and nuance from their strong vocals. The narrative is also pretty nonsensical but the show is more about punchlines than plot.

With a catchy soundtrack, dedicated performers and an ultra-kitsch vibe, this is one disco stick worth taking a ride on.