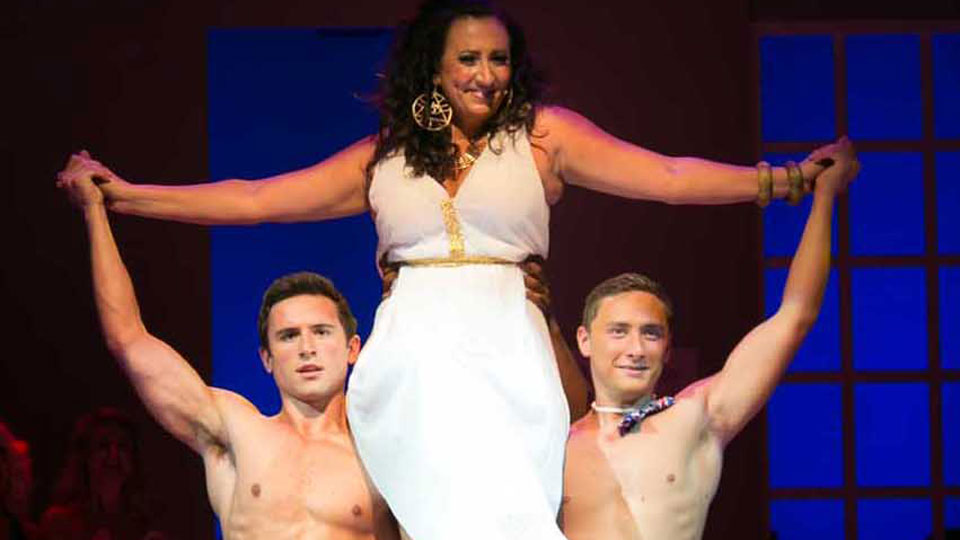 This has ‘so bad it’s good’ written all over it, doesn’t it? Thus, if you walk into this (cramped, swelteringly hot, possibly air con-less) theatre with the right attitude – i.e. if you’re partial to a bit of trash (and that’s nothing to be ashamed of) – you’ll find something to enjoy here. If not you’re in for a cringe-inducing ride. And if you’re of the school of thought that musical theatre is an art form (which it is, but certainly not in this context), be warned… you’re going to want to sit this one out.

We’ll get the plot out of the way first – and really, that shouldn’t take long. A product launch at a department store: disillusioned shop girls Jenny and Sharon (Daisy Wood-Davis and Amy Scott) are busy giving makeovers in between tweaking the WAG-filled guest list and complaining about their nasty-piece-of-work boyfriends. Come the party, and through the larger-than-life characters they meet on the red carpet, they learn some valuable lessons about men, money and self-worth. And, er, that’s it. The action takes place almost in its entirety in the department store (a static set cheaper than the WAGs’ outfits), in the space of a day. This speaks volumes about the lack of ambition here.

The dialogue is weak – there are some fantastic one-liners and some astute observations, but they are few and far between, lost in a sea of average, like a bad soap opera: it takes a good seven minutes for the first belly laugh to occur, and really, that’s 6 minutes and 59 seconds too long. The lyrics are even more cliché-ridden, albeit the songs themselves are listenable in a top 20 pop song sort of way – the melodies, the instrumentation, the singing (apart from Cundy’s) are passable.

The show triumphs when the WAGs themselves take to the stage, Katie Kerr is charming as chip shop-loving Adele-alike Blow-Jo, Alyssa Kyria is on fire as the fabulous Ariadne (“Hello darling!” she says to a mannequin when she arrives in a glorious Greek accent; she also has the best song) while Pippa Fulton’s Vicci is the character who suggests how thoughtful this show could’ve been: brittle, damaged and vile, hating herself and her life, but nevertheless a powerful presence. Unfortunately, more stage time is given to the mundane, grating shop workers, an assortment of stereotypes too lazy and hackneyed to bother going into. Honestly, if the aforementioned trio of talent had had double the amount of lines this might’ve been three-star worthy.

The show’s star name, Lizzie Cundy, an ex-WAG herself, personifies the guilty pleasure-element apparent here. She can’t act, she can’t sing, she can’t dance, she can’t even jig in the same momentum with the rest of the cast during the closing number; but she can look fabulous, bring buckets of personality to proceedings while simultaneously ripping the mickey out of herself. It’s actually a shame she’s not literally playing herself: what the show needs is just that bit more self-reflexivity. At one point someone shouts ‘Free Champagne!’ and Lizzie runs off stage like a mad women, almost tumbling from her skyscraper heels. Our advice to Lizzie: go bigger, brasher and sillier with the acting, singing and dancing – the audience are on your side.

The critical mauling it’s received elsewhere – with some going as far as to accuse it of sexism – is overblown. For the most part, it’s well-meaning, harmless fun (…except the parts that aren’t fun).

Pippa Fulton in WAG! The Musical