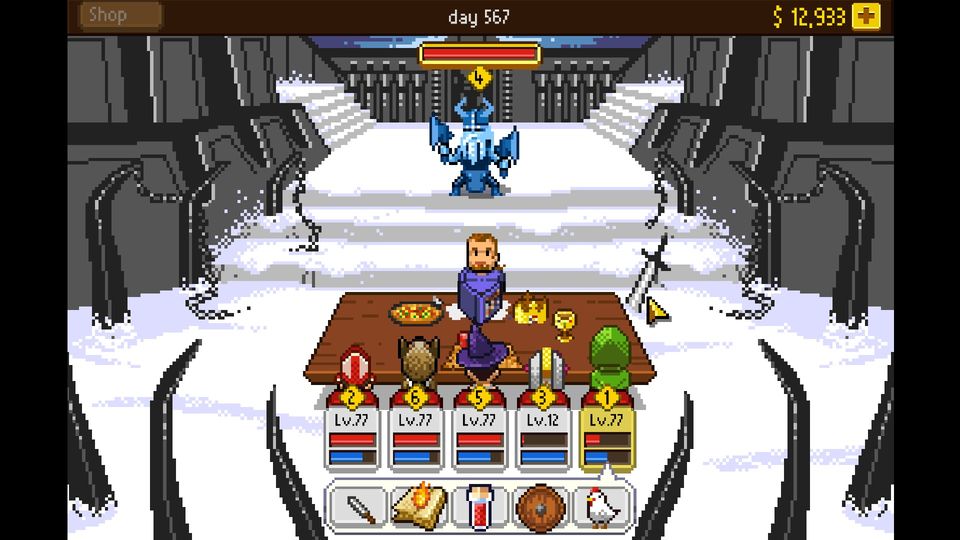 In the not too distant past playing a Role-Playing Game involved little more than sitting round a table with a few friends, some dice and a pen and paper. Players were guided on their adventures by a dungeon master and needed to use imagination to picture the events as they were described. Knights of Pen and Paper +1 Edition, by Brazilian developers Behold Studios, is a retro themed game that aims to bring back the experience of the traditional RPG.

RPG games normally allow you to create a character to take on an adventure but Knights of Pen and Paper is a little different. In the middle of the screen is a table with five chairs on one side and a dungeon master sat opposite. You must choose from a cast of people from various archetypes such as the gamer, the nerd, the little brother and the grandma. For each person you choose you must also pick a class for their character to play from Paladin, Rogue, Warrior, Mage, Druid and Cleric.

Each person brings their own passive skill to the table such as discounted resurrection or bonuses to skills, healing or attack. Each class has their own base stats to begin the game which include attack power, health, magic, threat, initiative and crit. As you earn XP your characters can level up to become stronger and gain skill points to learn abilities.

Although it’s a single player game you must create two players to join the table to begin a game. As any RPG fan knows you stand a much better chance with a balanced party. If you like you can spend in-game gold for a third person to join the table. If you buy a Holy Grail from the in-game shop with gold you can bring a full party of five people. You can even buff your players with drinks and snacks to make their characters more powerful.

Once you get going the dungeon master sets the scene and the area around the table changes to reflect your current situation. This is a really neat idea as its essentially showing you the world your players are imagining for their characters. In addition to the locations encounters are shown by placing enemies around the table.

When you stumble across a fight you can control the difficulty by deciding how many enemies to tackle at once. If you’re feeling confident you can bump up the numbers or even face elite enemies for more of a challenge but greater rewards if you succeed. Battles are turn-based and you can decide if you want to attack, defend or use an item. After a battle you can opt to rest which passes the time and things become more deadly.

You can opt to follow the main quest line and adventure around the map. Alternatively as you have a certain amount of control over the dungeon master you can opt to create your own quests. Custom quests fall into four categories – Slay, Escort, Collect and Rescue. As well as the type you have some control over the object of the quest such as what you must slay, escort, collect or rescue.

Your gold can buy new gear and items for your characters. It can also be used to buy cosmetic upgrades to the environment such as changing the style of table you sit at, the furniture of the room and even the décor. All these items also add some kind of permanent effect to the game like increased magical resistances, stat bonuses. It’s also possible to customise the pet that stands at the table and even the dungeon master. Older players in particular will instantly recognise some of the choices available including ones based on Yoda (Star Wars), Splinter (TMNT), Johnny Six (Short Circuit) and Dungeon Master (Dungeons & Dragons).

You don’t just have to earn gold through play as instead you can opt to buy some via in-game microtransactions that start at 79p for 300 up to £3.99 for 10,000 gold. There’s really no need to buy gold unless you’re impatient but it’s a nice way to support the developers if you enjoy the game.

Being a retro themed RPG the graphics use pixel-art and the music is simple but catchy midi tunes. The music and graphics are a perfect fit for the game and add to the experience. It wouldn’t look out of place on our old friend the Commodore Amiga and we love it for that.

Overall we’ve had great fun with Knights of the Pen and Paper +1. It’s not the sort of game you’ll play for hours on end but it’s perfect for dipping into for short sessions. If you have a tablet PC the Android or iOS versions might be best for you but it’s still well worth picking up for PC players too.