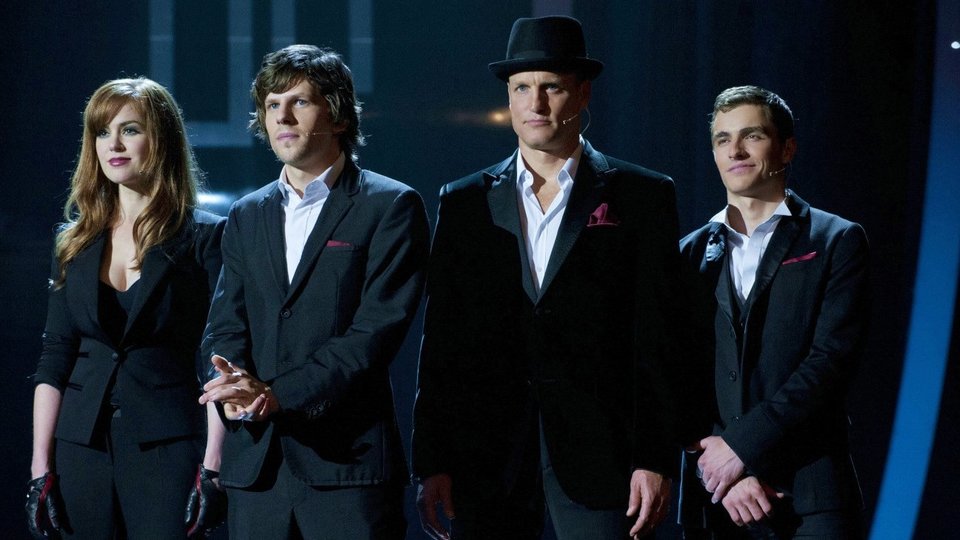 Four talented magicians mesmerise an international audience with a series of bold and original heists, all the while pursuing a hidden agenda that has the FBI and Interpol scrambling to anticipate their next move in Now You See Me, a visually spectacular blend of astonishing illusions and exhilarating action from director Louis Leterrier (Clash of the Titans).

The Four Horsemen, a magic super-group led by the charismatic Atlas (Jesse Eisenberg), perform a pair of high-tech, high-profile magic shows, first amazing audiences by remotely robbing a Paris bank while in Las Vegas, and then exposing a white-collar criminal and funnelling his millions into the audience members’ bank accounts, baffling the authorities with their intricately planned capers.

FBI Special Agent Dylan Hobbs (Mark Ruffalo) is determined to make the magicians pay for their crimes—and to stop them before they pull off what promises to be an even more audacious heist. But he’s forced to partner with Alma (Mélanie Laurent), an Interpol detective about whom he is instantly suspicious. Out of desperation, he turns to Thaddeus (Morgan Freeman), a famed magic debunker, who claims the Paris bank trick was actually a meticulously planned illusion.Dylan and Alma begin to wonder if the Horsemen have an outside point person. If so, finding him (or her) would be the key to ending the magicians’ crime spree. But who could it be? Or could it really be…magic?

First prize in our great competition is a SIGNED Now You See Me poster by Jesse Eisenberg and Isla Fisher and a goody bag.

2 runners-up will each get a goody bag.

In this article:Competition, Now You See Me