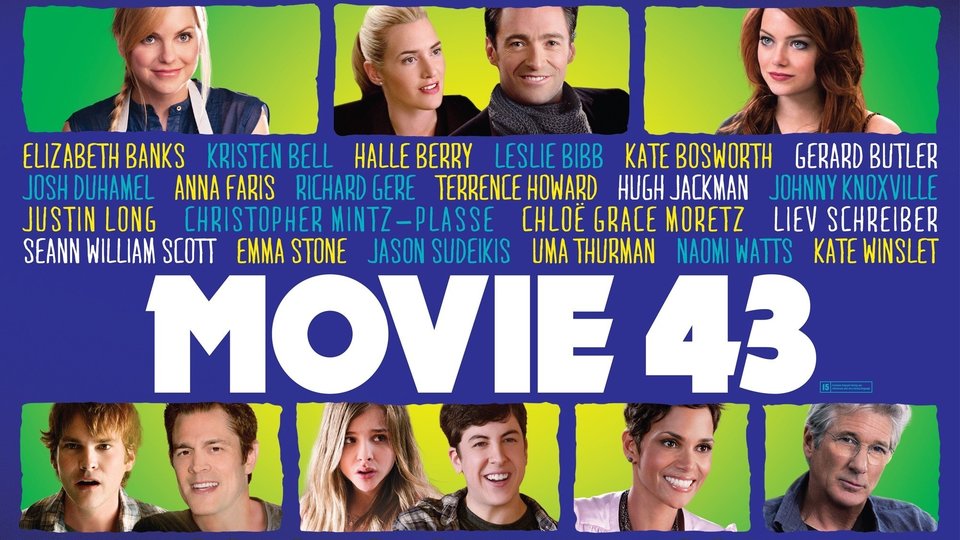 A series of over twenty interconnecting comedy shorts, all loosely held together by an over-arching storyline of a group of young kids trying to find the most banned film in the world, which will ultimately lead to the destruction of civilization.

Director Peter Farrelly, one half of the directorial duo The Farrelly Brothers – who gave us such great comedy films as Dumb And Dumber, There’s Something About Mary and Shallow Hal, co-directed and produced Movie 43 over a couple of years. Each segment is filmed by a different director, and has a couple of hugely famous Hollywood stars in it.

The segments were all filmed at different times due to trying to fit the filming in around the schedules of the stars, so when two stars were working on separate projects they had to wait until both were free to be able to film their parts at the same time.

Every single one of those stars should be able to bring something interesting, unique and rather funny to their small segment. Sadly that is not the case at all; in fact this film is downright puerile. It’s a film without any clue as to what it should be doing or who it should be aimed at. Its jokes are very unfunny and at times downright depraved. We are all for dirty jokes (we love a bit of Jackass) but this just oversteps the mark so far and then continues to plunder the non-entity joke way too far.

The prime example of this is from the first segment that involves Hugh Jackman and a pair male testicles hanging from his face, initially it’s a rather funny joke that should last for about thirty seconds. Instead it is extended out to about ten minutes and it is the same mind-numbing joke time and again, there is only so many times we can laugh at a joke about a pair of testicles getting in the way of someone eating and drinking.

The rest of the film continues in the same vein as we see each individual segment make no sense to the outer story arch about finding a lost tape (Strangely the US version had a different outer arch involving Richard Gere), every comedic scene gets worse and worse until it’s too late for the film makers to bring it back into a coherent storyline. The only short segment we found mildly amusing was the one involving Stephen Merchant and Halle Berry, whilst it’s nowhere near a masterpiece is easily the best of anything on display. Merchant, very much, seems to revel in the role of just shouting obscene words and issuing strange demands at one of the most beautiful women in the world. Of course, the joke goes on far too long and the end result is another reason why this film doesn’t seem to understand the difference between a thirty second joke and a ten minute extended version

Movie 43, on paper, sounds like a great idea and the cast is one of the best ever assembled, but when the joke is school ground humour stretched out over a few minutes all of it feels embarrassing – to the actors and to the viewer. This will go down as one of the worst films of the year.

Advertisement. Scroll to continue reading.
In this article:Movie 43