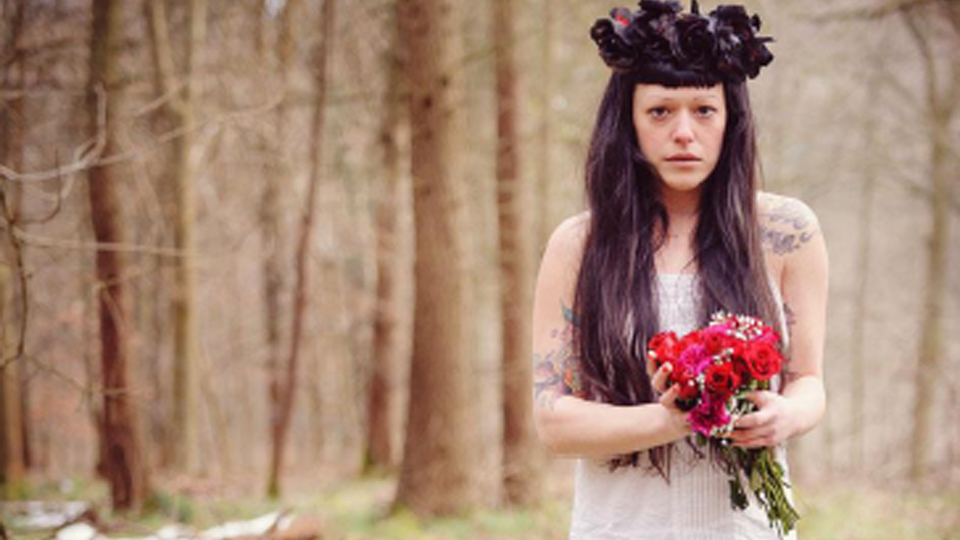 It tells the story of two rural Spanish families and a young bride and groom whose marriage will unite them. After a violent murder some years earlier, there remains bad blood between the two households; and this is compounded by the bride’s continuing affection for another young man of that family.

Blood Wedding fits into Hiraeth’s speciality of staging violent classics of feuding families, but the surreal aspects of Lorca’s writing always keep the audience one step removed from the moments of brutality, which neutralises some of the visual impact that the former productions played on.

The quality of the performances is hugely variable. Scarlet Sweeney’s Mother is far too intimate a portrayal for the cavernous and long auditorium, and sadly she is inaudible throughout much of the show. This was especially regrettable in the opening scene between her and the groom; where much of the backstory is established, and was consequently lost.

The leads fare much better. Dominic Danson is suitably innocent and affable as the groom, though his moments of rage are well-chosen and convincingly played. Maya Thomas, who hugely impressed us as Lavinia in Titus Andronicus, is solid as the bride too. It’s a less rewarding part in many respects, not least stage time and character development, but Thomas is exceptionally good at playing vulnerability and earning audience sympathy. Fresh from starring as King Lear at Greenwich Theatre, Jennifer Shakesby, tripling up parts here, is dependable support.

Comic relief is provided by Mark Forester-Evans as the bride’s father. He’s only in a few scenes but makes an impact, and he successfully plays for laughs whilst remaining entirely credible as a kind and occasionally sardonic paternal figure. Carolina Main also shows great attention to detail in her characterisations, and similarly elicited a few laughs.

Blood Wedding faces an uphill struggle playing against the notoriously difficult acoustics of a railway arches theatres. It also feels very uneven, and the playwright is partially to blame here for switching more or less entirely to surrealism in the third act, which is presented here after an interval. The change in tone, and the off-stage narration of horrific events about characters we’ve come to care for in the first two acts, is undramatic, and makes for a flat conclusion. This production, which takes a while to burst into life but achieves it in the second act, fails to sustain its momentum after the break. The surreal elements, introducing supernatural characters we care nothing about, don’t serve the artistic vision of the company as much as the successfully achieved on-stage massacres of their earlier works. Lorca’s play is ultimately unsure whether it wants to be a straightforward drama or a surreal piece, and the mixture of the two is unsatisfactory.

Blood Wedding, an uneven play in its own right, makes for an unusually off-kilter production from Hiraeth. Their Titus Andronicus can be seen at the Edinburgh Fringe in August.