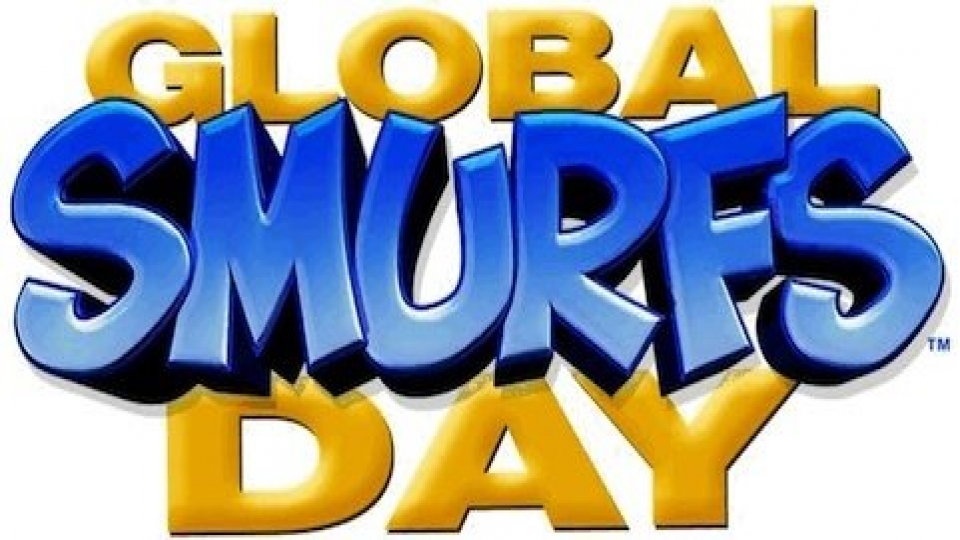 On Saturday, June 22, 2013, in celebration of the birthday of Peyo, the creator of the Smurfs (born June 25, 1928), Columbia Pictures and Sony Pictures Animation will once again coordinate events all over the world as part of Global Smurfs Day, a worldwide event in anticipation of the release of The Smurfs™ 2, at UK cinemas July 31.

This will be the second celebration of Global Smurfs Day in what is quickly becoming a tradition.  In 2011, the round-the-world events included painting one of the famous White Towns of Andalusia blue and setting a new record for Largest Gathering of People Dressed as Smurfs within a 24-hour Period (Multiple Venues).

In London, Sony Pictures UK is putting on the Smurfiest party EVER to celebrate Global Smurfs Day. On Saturday, June 22 Westfield London in Shepherd’s Bush will be host to a Smurfestival, a day of free fun and excitement for all the family.  Hosted by Magic 105.4’s Jamie Edwards, festival-goers will be entertained by an amazing line up of music performances plus family entertainment, games, activities and much more!  The Smurfestival will also benefit the charity MediCinema who build cinemas in hospitals and help people feel better through film.  The headline act at the Smurfestival will be a performance by Right Said Fred who will lead a giant Sing-Along to ‘I’m Too Smurfy’!  Smurfs fans can visit the official UK Facebook page to learn the lyrics and even be in with a chance of winning £1000.

‘I’m Too Smurfy’ is also available to buy on iTunes and 20p from each order goes directly to the charity MediCinema https://itunes.apple.com/gb/album/im-too-smurfy-single/id652908661

The studio has lined up an equally impressive program of global events, highlighted by a worldwide Smurf Ambassadors initiative, in which over 40 ambassadors from 28 countries will represent Smurfs fans from around the world with a special day of events celebrating Peyo’s creation.  The ambassadors – celebrities, prominent journalists, and contest winners among them – will dress as Smurfs as they begin their day in Brussels, where Peyo’s daughter Veronique Culliford will officially appoint them as Smurf representatives of their countries.

The fun-filled (if irreverent) ceremony will take place under the watchful eye of an important Brussels monument:  a Smurf statue unveiled just a year before.  Freshly charged with their ambassadorial duties, the group will board a Thalys train and shoot off to Paris, the locale of the adventures in Columbia Pictures / Sony Pictures Animation’s The Smurfs 2.  With a few surprises in store and a sightseeing tour of the French capital, the ambassadors will be tasked with a mission that is the stuff of high diplomacy:  to leave a happy trail of blue smiles in their wake, and herald the arrival of the new film.

The Ambassadors will also be taking photos and posting them on Instagram and Twitter with the hashtag #GlobalSmurfsDay The Ambassadors’ photos will stream to the official Global Smurfs Day microsite at www.GlobalSmurfsDay.net where users can also virtually check in to Global Smurfs Day activities and find information about all worldwide events, official photos, and a sizzle reel.

Festivals and celebrations will be dedicated to the Smurfs in locations as far and away as the Buenos Aires Planetarium, Mumbai’s Imagica theme park, and Rio de Janeiro’s iconic Sugarloaf Mountain.  Blue brushes will brighten Portugal’s Cova da Moura neighborhood and paint daycare centers and orphanages in South Africa.

And in Los Angeles, families will enjoy the day with appearances by the Smurfs, play the Ubisoft video game, sample Menchie’s Smurfberry frozen yogurt, and participate in other fun activities; in addition, the U.S. Forest Service and Ad Council’s Discover the Forest campaign will be on hand to distribute activity booklets and encourage children and their families to get outside and experience the many benefits of nature, and in the evening, families will be able to catch the first Smurfs film at an evening outdoor screening.

Commenting on the announcement, Marc Weinstock (president of Sony Worldwide marketing) said, “We’re thrilled that we can continue the tradition we started on the first film with an all-new Global Smurfs Day celebration.  This is a great way to honor Peyo’s birthday and his legacy, by bringing the world together across generations for a day of fun and festivities.”

Advertisement. Scroll to continue reading.
In this article:Global Smurfs Day, The Smurfs, The Smurfs 2