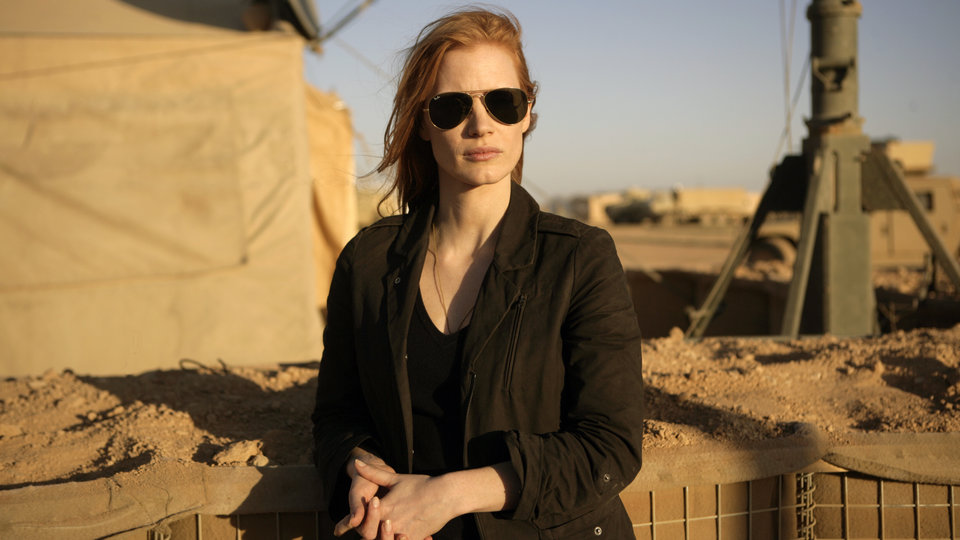 Maya (Jessica Chastain – The Help) begins a dogged search for the men responsible for the 911 attacks. Over the course of a decade, evidence is meticulously pieced together to ascertain the whereabouts of Al Qaeda  leader Osama Bin Laden, before a daring mission to neutralize him is put into action.

Zero Dark Thirty finally arrives on a wave of controversy that ‘s threatening to overshadow the film. For right or wrong, this has given the movie a very wide potential audience so it’s a relief to say that for the most part, Zero Dark Thirty is ambitious and compelling viewing. With The Hurt Locker’s Kathryn Bigelow at the helm, you should expect nothing less. But it does have a few problems that stops this from being judged as a true classic.

Jessica Chastain has quickly become Hollywood’s go-to girl when it comes to strong performances. The star of The Help, The Debt and Lawless hands in a breathtaking lead performance. This will propel her to that next level whilst cementing her status as one of the most sought-after female talents in cinema today. Chastain makes Zero Dark Thirty a success with a hard-nosed but balanced turn that always draws your interest.

The film’s plethora of supporting talent are all excellent too with The Chicago Code’s Jason Clarke quite brilliant as operative Dan whilst Mark Strong steals his scenes as Chastain ‘s boss. There are also solid cameos from Your Sister’s Sister star Mark Duplass, The Sopranos’ James Gandolfini, Friday Night Lights’ Kyle Chandler, Park & Recreations’ Chris Pratt and Warrior’s Joel Edgerton amongst many others.

The film has been met with widespread controversy, not just about its subject matter but at the torture scenes used within the movie. Personally I think it’s handled very well and never feels too uncomfortable or intense. It ‘s also a truthful, accurate portrayal of what happens in these extreme situations so it actually helps with the story’s authenticity and integrity.

The film also resists the temptation to glorify or sensationalise any events that unfold. The aftermath of the take-down of Bin Laden is downplayed expertly and Chastain really impresses here. When it needs to, Zero Dark Thirty also shifts gear exceptionally well and that ‘s squarely down to Kathryn Bigelow’s direction which is always sharp, to the point and engrossing.

Zero Dark Thirty is a very well made movie that has some amazing star turns, especially from Jessica Chastain. But as good as the script and performances are, the film still drags in the middle. Thankfully the bright start and the intense finale do enough to pull you through a few lulls and leaves you with an intriguing drama that has a lot to offer.

Jason Palmerhttp://www.entertainment-focus.com
Jason is a film contributor for Entertainment Focus (EF) bringing you the latest news and reviews from the movie world.
Previous article
Noel Clarke’s The Anomaly starts production
Next article
A Good Day To Die Hard DVD review