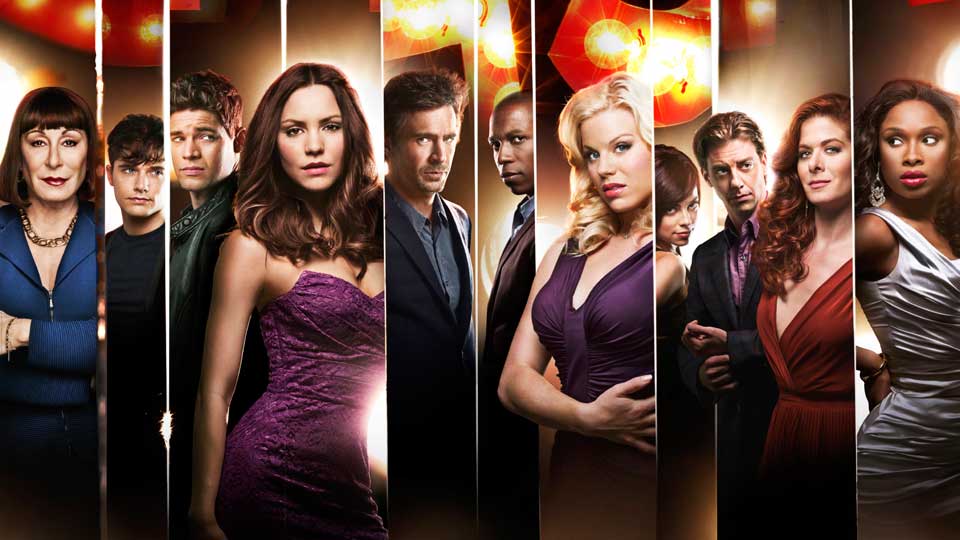 As we all know Smash didn’t enjoy the level of success that the network envisaged during its two season run.

Despite having a stellar cast – Megan Hilty, Debra Messing, Katharine McPhee, Jack Davenport, Anjelica Huston – the show experienced an online backlash and started a trend of ‘hate-watching’ (apparently people tuned in just to slag the show off).

We actually loved Smash. Sure there were some issues, as there are with all shows, but it certainly didn’t deserve the negative press it attracted. We’ve listed 10 reasons why we believe the show shouldn’t have been cancelled.

1. Megan Hilty. Before the show few people outside of the theatre world knew who Megan Hilty was. Now thanks to her magnificent performance as Ivy Lynn we’ll be keeping our eyes out to see what she appears in next. She also has a mighty set of lungs and she was one of the best singers on the show.

2. Katharine McPhee. The former American Idol contestant surprised us all with her acting chops. We knew that she could sing but we had no idea she could pull off a role as meaty as Karen. Her chemistry with Jack Davenport and Megan Hilty was magnificent and we’re going to miss rooting for her every week.

3. We’ll never know what happened to Karen and Jimmy. In the series finale Jimmy turned himself in and faced up to his past but we want to know will Karen wait for him? If the show had got a third season they could have moved forward in time to Jimmy’s release. We believed in this romance but we’ll just have to keep wondering.

4. Tom and Julia’s chemistry. One of the best things about Smash was the chemistry between Debra Messing’s Julia and Christian Borle’s Tom. They were the backbone of the show and we loved every minute of their bickering and making up routine.

5. The music. Smash’s soundtrack was one of the things we’ll miss the most. Sure we could have done without some of the dodgy covers that appeared over the two seasons (we’re thinking specifically of that Under Pressure montage in the finale) but the original music shined. The Broadway feel of Bombshell versus the contemporary pop sound of Hit List made the show must-watch.

6. Derek and Ivy’s relationship. They sure had a troubled history but now that Ivy is with baby, it seems that she can finally make an honest man out of Derek. It seemed he was open to the idea of giving it a try. We want to see if they get their happy ever after.

7. Feisty Eileen. Anjelica Huston is a legend so to have her on our TV screens every week has been a joy. As theatre producer Eileen she injected some fun into the show, especially her constant bickering with ex-husband Jerry.

8. Krysta Rodriguez won’t get chance to shine. It looked like Krysta’s Ana was really going to shine following that stunning gala performance but after being replaced by scheming Daisy she was pushed to the sidelines. We think she was drastically under-used but that could have been rectified in a third season.

9. We’d only just been introduced to Patrick Dillon. Brothers & Sisters actor Luke Macfarlane had only just featured in the show as film director and theatre critic Patrick Dillon. We’d have loved to see how things panned out following Tom’s surprise kiss during the finale.

10. Jeremy Jordan’s hotness. It’s fair to say that no one was all that bothered about the departure of Dev at the end of the first season but we’re sure going to miss Karen’s boyfriend Jimmy Collins aka Jeremy Jordan. Sure he behaved like a petulant child a lot but we loved his interaction with the late Kyle Bishop and his romantic moments with Karen were touching. Plus he looked great with his shirt off.

Do you agree that Smash should have been given another season? Leave your comments in the usual place and let us know what you think.