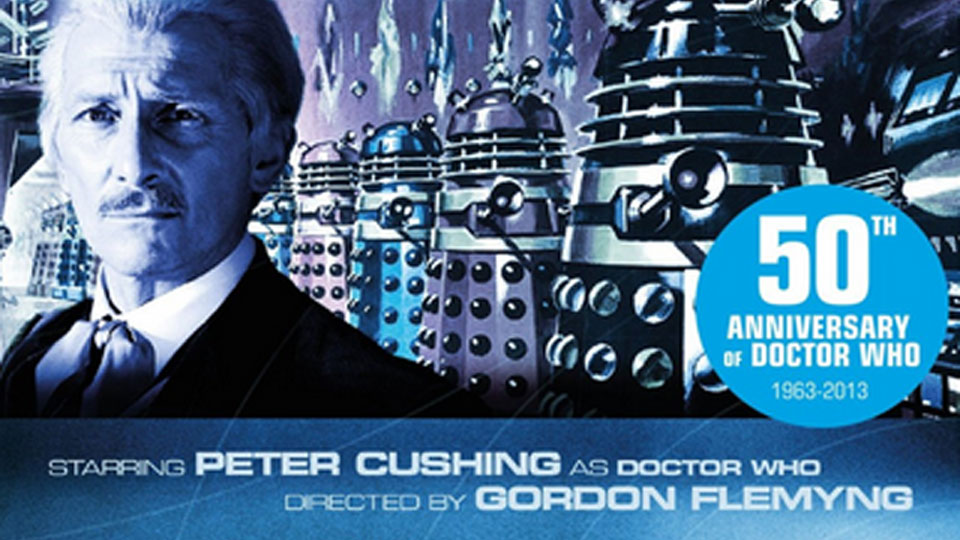 Doctor Who hit TV screens in 1963, and was a huge success right from the word “Dalek”. These two feature films are unique in the annals of Doctor Who, made as they were for the big screen as an attempt to cash in on the “Dalekmania” of the mid-1960s. Since their release on DVD some years ago, the film prints have been lavished with TLC and digitally remastered, and are now presented for the first time in high-definition Blu-ray (as well as enjoying another DVD release), restored to their original Techniscope format (a poor man’s widescreen print – it’s all explained in the extras detailing the films’ restorations). They look bigger, better, sharper and more detailed than ever before, and tie in with star Peter Cushing’s centenary and the TV series’ 50th Anniversary.

These two movies, released in 1965 and 1966, were big budget (well… relatively speaking) recreations loosely based on two of the television Dalek stories by creator Terry Nation that had featured the First Doctor William Hartnell. The intention was to make the Daleks bigger and better than ever before on the silver screen. The only snag is that they are palpably less scary.

Dr. Who and the Daleks boasts bright pink plastic sets for the Dalek city that, inarguably, camp up and undermine the menace they exude through grainy black and white. However, the remit of the films was to direct them squarely at a young target audience, with the more adult aspects of the television series appropriately toned down. The wonderful Peter Cushing is extremely lovable as “Dr. Who” (now depicted as an eccentric Englishman who invents a time machine in his back garden). His portrayal is the complete opposite of small screen counterpart Hartnell’s bad-tempered, alien and occasionally sinister Doctor – instead providing a warmer hero for young children to more easily take to. The Daleks, who fired death rays on the television, expel fire-extinguisher carbon dioxide gas in the movies to successfully render them less terrifying. The preposterous plot resolution to the first film is another indication that producer Milton Subotsky had a less sophisticated audience in mind.

Dr Who and the Daleks

The complete change in emphasis from the TV series does at least make the movies a distinctive franchise in their own right, and the comic element is played up by the Doctor’s young male sidekick. In the first film, entertainer Roy Castle offers exquisite comic timing and pratfalls. The second film sees Bernard Cribbins playing an equally accident-prone companion.

The films are, credit where it’s due, beautifully directed (Gordon Flemyng was at the helm for both), and he succeeds in rendering an epic feel to the adventures. He has a great eye for detail, making each frame interesting to look at, using different levels and taking full advantage of extensive studio space. Barry Gray’s distinctive musical scores are another major plus point.

Though it’s hard to separate them from their small-screen parents, it’s best to view the films as a completely separate entity, since the tone and chronology vary so wildly. Peter Cushing’s central performance is perhaps divisive, as he is certainly supposed to be human, to the point of being entirely humanised. Nevertheless, his affable meddling scientist is vastly to be preferred than the Harry Potter-like wizard-in-space of the recent tawdry remake.

Dr. Who and the Daleks (1965) sees the TARDIS land on the planet Skaro. Exploring their surroundings, the planet appears to be dead; the soil nothing but sand and the forest now nothing but the petrified remains of trees. The travellers suffer radiation sickness from the high levels of radioactivity – the result of a nuclear war between the Daleks and the Thals. With the Daleks planning to wipe out all surviving Thals, Dr. Who and his companions must find a way to convince the Thals to fight back in order to save themselves.

Daleks’ – Invasion Earth: 2150 AD (1966) sees the TARDIS lands in futuristic London (that looks uncannily like the 1960s) which has been devastated by invasion. Britain has been conquered and Dalek spaceships control the vanquished opposition from the skies. The Daleks brainwash thousands of humans and turn them into Robomen, walking dead slaves. Dr. Who and his companions become mixed up with the human resistance groups. It features superb British character actors Andrew Keir and Philip Madoc, who both play it dead straight. Visually stunning, with some tremendous action sequences and model work, it stands up to this day as an example of a good British sci-fi film and is the stronger of the two Dalek films.

The overall effect of the restoration, which brings clarity and definition to the films, is a double-edged sword. Certainly the films have never looked better, but whereas a wide shot of a Dalek ship in devastated London looks entirely convincing in 4:3 on VHS viewed in standard definition, the Blu-ray on modern TV sets reveals the extensive use of painted backdrops. The clearer the image, the more the joins are visible!

There are a few extras on the discs, but most have been previously released on DVD. New features include short restoration documentaries on both discs. There’s also a pleasing recently-filmed short interview with Bernard Cribbins in which he talks affectionately about Peter Cushing and what the film meant to him. Alas, still no commentary on the second film, and the one that was recorded for Dr Who and the Daleks isn’t present on this disc.

Daleks’ Invasion Earth: 2150AD boasts the documentary “Dalekmania”, filmed in the mid-1990s, which covers both films and features some of the surviving cast and crew and explores the possible reasons for the overwhelming popularity of the Daleks. Of particular interest are the stories of Jill Curzon and Roberta Tovey, guest actors Barrie Ingham and Yvonne Antrobus; as well as Eddie Powell, a stuntman whose involvement in the second film left him with a broken ankle.

The charm of the films is that they are nostalgic 1960s period pieces and are probably best viewed on their own merits as interesting cult British sci-fi films; rather than as part of the Doctor Who canon. But they stand the test of time as exciting adventures.