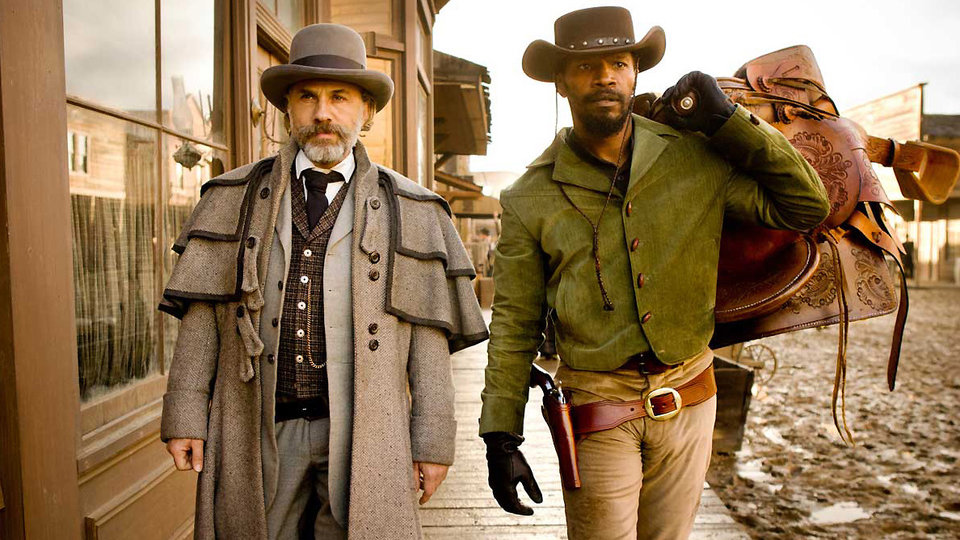 A German bounty hunter named King Schultz (Christoph Waltz – Inglourious Basterds) frees a slave named Django (Jamie Foxx – Miami Vice) in order to help him track down one of his bounties. After a successful capture, Schultz asks Django to work with him for the remainder of the year and gives him a third of all the rewards they earn. Django agrees, but on one condition – that he and Schultz go after his wife, who is being held captive by Mississippi plantation owner Calvin Candie (Leonardo Di Caprio – Inception).

Django Unchained is a brilliantly constructed movie that perfectly captures the essence of the great American western. Quentin Tarantino has done a remarkable job cultivating a brutal, captivating and devilishly sharp script that hooks you in from the start and rarely lets you go. Mix in Tarantino’s trademark violence and some amazing casting choices and you have one of the best films of 2013.

Jamie Foxx does a remarkable job as Django and gives him an air of swagger and cool that’s hard to better. The role was originally written with Will Smith in mind but it’s tough to see anyone topping Foxx’s sublimely powerful performance here. He has shone brightly in many of his movies but Django Unchained is without doubt his finest role to date, closely followed by his stellar turns in Ray and Miami Vice.

As good as Jamie Foxx is, Django actually belongs to one man – Christoph Waltz. After stealing Inglourious Basterds (and every other film he appears in like The Green Hornet, Water For Elephants and The Three Musketeers), Waltz does it again as the charismatic King Schultz. His performance is mesmerizing and truly special – certainly worthy of an Oscar now that Django Unchained has garnered 5 nominations. Foxx and Waltz share a very pliable chemistry that evolves throughout the movie and provides plenty of wow moments mixed in with master-classes of subdued restraint and palpable tension.

With a central pairing as strong as Jamie Foxx and Christoph Waltz you’d be forgiven for thinking that the supporting cast all take a back seat but on the contrary, they play a pivotal role in the success of the movie. Leading the way is Leonardo Di Caprio who is sensational as the plantation owner Calvin Candie. Alongside him is an almost unrecognisable Samuel L. Jackson who grabs your attention as a conniving, bigoted slave who enjoys working for Candie and who detects deception when Schultz and Django appear on the plantation.

The violence is brutal and unflinching but you’d expect nothing less from the mind of Tarantino. It’s very hard to watch at times but it never feels gratuitous or excessive in the realms of this fable. Perhaps people should instead focus on the intricacies of the script which Tarantino has masterfully pieced together. It’s full of significance and sass, with biting satire and sharpness peppered liberally throughout. Having such a strong story helps this collective of great actors all give their roles depth and texture.

There are, however, a few problems with the film too. Tarantino still hasn’t learnt restraint when it comes to featuring himself in his movies, and as a result his cameo is both perplexing and slightly ill-fitted. Then there is the length of the film. After reaching a quite natural and satisfying conclusion, Django Unchained then goes on for around 40 mins too long. Those minutes do have entertaining scenes but the film had reached a very good point and perhaps didn’t need that final push. That’s not to say that Django Unchained is a bad film by any stretch of the imagination, it just doesn’t need to go on this extended run.

Django Unchained is a superb piece of cinema that will be revered for many years to come. Tarantino has made a truly classic western that screams for a sequel whilst laying down some seriously cool vibes. Mix in 5 star casting choices, stylish violence, a now trademark kick-ass soundtrack and a script to die for and you have one unmissable film experience that ranks among Tarantino’s very finest.

Jason Palmerhttp://www.entertainment-focus.com
Jason is a film contributor for Entertainment Focus (EF) bringing you the latest news and reviews from the movie world.
Previous article
The Sessions DVD review
Next article
What We Did On Our Holiday filming begins